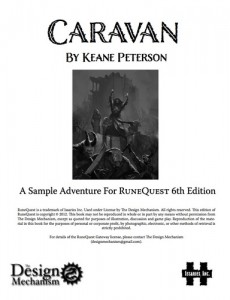 This is the free sample/introductory adventure from the the Book of Quests. It has the characters acting as caravan guards. It’s clearly padded beyond all reasonableness and commits the original sin: being boring. Especially vile in this case since it’s meant to get people excited about the product AND serve as the kick-off for the other adventures in the Book of Quests.

I understand that Runequest is not D&D. That does not excuse this adventure. In it’s 24 pages only about six contain the meat of the adventure and about two and a hal or those are maps or illustrations. The first 13 or so pages of this are all background and bullshit exposition text that details, extensively, some of the most boring encounters ever published. Skill check to see a deer crossing the road! Locale check to spot tasty herbs for the dinner pot that night! Perception check … to see that there NO bandits on the road. Seriously? Oh no! A rockslide! Better roll the dice a meaningless number of times to clear the road for the wagons! Come one. Seriously? And four or five paragraphs for that shit? Over a third of a page? Another half page for wolves at night … that never attack. They just hang around. This nonsense goes on and on and on. Bullshit skill rolls and MOUNTAINS and MOUNTAINS of text surrounding them. It’s not that all of the encounters are bad, it’s just that FAR too much space is devoted to lame ones. There ARE a couple of decent encounters scattered about. A bitchy soothsayer that a small village is mildly afraid of. A drunken pig hefting contest. A young girl that wants to run away from her fiancé. Those are all decent little items. Which, once again, take up FAR too much space in the product. None of these deserve more than a paragraph but instead they get at least a half page each.

The real adventure takes place in a village the caravan passes through. Everyone in it has been slaughtered. Bloodily. What SHOULD follow is a tense night with a killer creature stalking through town. And then its barbarian handlers stalking through town, trying to collect the creature. And then a showdown with the barbarians at the Old Stone Bridge or at their camp. But there’s almost not detail or advice given for this section of the adventure. The caravan people are not detailed, so they don’t have personalities, so the players don’t care about them and they have no good reasons to wander off (to get killed) or react to the barbarians. There is a good paragraph or two that does a great job conveying the carnage of the village. But the village proper has almost no detail at all and it’s supposed to be the site of the main action. Everything is VERY loose, except when meaningless detail is endlessly described. And yet this is supposed to be an Alien-like portion, at night, with a killer stalking the caravan folk and characters. It seems all very story-gamer/scene based to me, rather than being a sandbox environment for having an adventure. In fact, it’s not clear to me at all why the characters would follow the barbarians back to their camp for the big showdown, especially with SO many barbarians present.

The NPC’s here are not developed enough, the village and it’s environs are not detailed enough. The whole barbarian thing is a mess, although it looks like it’s a lead in to the next adventure. I can’t imagine why anyone thought it was good idea for this to be the free sample.

Clearly, paid by the word.