Tales of the North – The Raiding Party 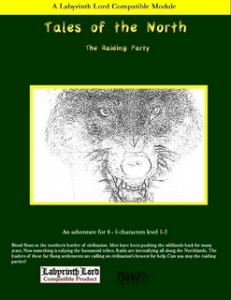 The borderland has for over a thousand years marked the northernmost progress of human civilization. The border is not a line marked on a map but a tide advancing and receding. The Borderland is the tidal plane between high and low tide claimed by both wilderness and civilization but held for long by neither.

A goblin lair in a small region that also includes numerous bandits, an evil temple, and werewolves, nagas, and other beasties. It starts strong but peters out as it reaches the main area: the goblins. There are large numbers of enemies, which I generally like, but the main lair is too simplistic and the subplots too few for a sustainable regional adventure.

The Borderlands! A place full of adventure and fortune! And bandits. LOTS of bandits. This module describes a small outpost and the a few locales around the outpost, along with a couple of events. The events are quite loose and the best part. Things start off with the group witnessing the end of a bandit attack on a wagon train. This is followed up with a patrol in the woods, a bandit camp with 35 or so guys in it, and a hostage selling expedition. All of this happens in just a single page. Great! As the page count implies, this section is really loose. That’s not a bad thing, in fact I prefer that to ten pages of text about it. What it could use though is just a little more detail. A rough map of the camp, or perhaps a couple of sentences about personalities and factions in the camp would have done wonders for this section. I LOVE seeing large numbers of bandits. The entire situation can be like a puzzle that the party has to figure out. How do we get in to camp? What are we looking for? Can be bribe someone? Can we join? Those are the moments that role-playing was built for. The set-up here emphasizes fighting and shadowing a little too much, as is to be expected with the lack of detail.

From here the adventure may lead to an old temple with evil priests. This place is cRa CrA! Death trap in the first hallway, Spirit Naga, 4 HD priests, potions of human control … This is CLEARLY at the upper end of of “Levels 1-3” scale. What’s interesting here is that there’s nothing interesting here. 🙂 “The priests robes are trimmed in red.” Uh … ok. “The chests are full of clothes and odds & ends.” The rooms are full of mundane descriptions of things that don’t really add anything to the adventure. Further, they act to disguise the parts that ARE interesting. Doors covered in liquid darkness. “The entry to this room is a sturdy iron valve heavily corroded.” Those are great details! A room echoing with the screams of sacrifice victims. Skeletons hanging from the ceiling in chains who break their bonds to attack. All very nice! But it’s buried in the mundane and there’s not enough of it. It’s also not really presented in any way other than a slaughter-fest. It’s assumed the party has followed bandits here and then attacks. But the EHP here should have motivations and goals and sub-plots of his own. None of that is really present and thus a great opportunity is lost.

This style continues through the outpost description. There’s an emphasis on the trivial rather than the interactions, goals, and sub-plots of the people at the outpost. The various buildings and people end up just looking like another monster key instead of a living place that exists outside of the characters. That’s too bad, and it blunts the effectiveness of the central point of the outpost: to be raided by monsters. You see, the outpost and it’s outlying farms are raided by a large group of goblinoids. There is some expectation that the party will help, but they don’t really have any reason to go running out in to the night. Ok, they do. It’s “This is the D&D adventure we’re playing tonight. Do it or we don’t play D&D.” That’s a pretty crappy reason. If the party gave a shit about the townsfolk or farmers that are getting raided then things might turn out different … and I’m using a pretty loose definition of “gave a shit.” There’s just not much in the way of interaction or DM direction for running the central hook of the module, the humanoid raid. The token room descriptions just don’t help at all and theres no advice. Contrast this to the similar situation in the C&C ‘I’ series or the Ironwood Gorge module. These provide advice and a general outline for a raid and how the humanoids and townsfolk may react, and give many more reasons for the party to interact with the townfolk.

The final dungeon is even more disappointing. It’s supposed to be an old complex but instead it’s tailor made for the occupants. It’s just a star-type design with the hallways holding rooms that hold goblins. There must be five of six of these hallways, each with four or so rooms attached, each room holding goblins of a certain war band. There’s the jail, and the kitchen/great hall and the bad guys rooms and that’s it. The rooms descriptions are essentially a waste since they all have the same things in them and add nothing to the adventure. “This barracks room appears to be the same as the others. The goblins are lounging.” Joy. Page after page after page of the same goblin stats, repeated, and room after room of goblin. There must be a couple of hundred in here, which is nice, but man there needs to be some variety in the encounters, or some advice on how the goblins react to intruders. The most interesting encounter here is the jail cell with the dead body with rot grubs … this is not a collection of whimsy and the fantastic, it’s a grind.