DLD6 – A Promise of Vengeance Fulfilled 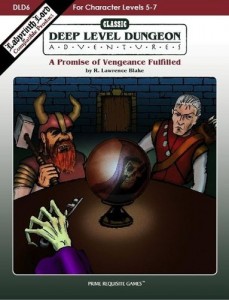 An evil warlord, facing betrayal from his own family, swore revenge with his dying breath. Ten years later, his vengeance has come to pass with the murder of one and the promise of more death to follow. Has the warlord raised from a decade of unrest to fulfill his bloodthirsty oath? Can the characters stop him before more fall prey to his vengeance?

This is a small fourteen room tomb adventure, meaning that it’s fairly linear with a lot of “set up” puzzle-like situations. I suppose it’s fair to drop something like this in a hex crawl, but even saying that makes my soul cry. No, that’s not fair. Let me change it to: This makes my soul cry.

While looking this adventure over I was thinking about another adventure and comparing this one to that. This adventure is eighteen pages long. It has fourteen rooms. Spawning Grounds of the Crab-Men is twelve pages long with 53 rooms. Spawning Grounds has multiple areas, a very non-linear design, several factions, and is stuffed full of weird ass non-traditional/non-book creatures and items. This adventure is mostly linear and full of book creatures/items and has a “correct” way to finish it. I especially don’t like that last part. “Go fetch the X and put it in to the Y and then teleport to the Z but only if you first explored every room in the tomb.” Contrast that with a wide open area in which the party can use their powers and abilities to approach the “problem” in any way they choose. One is a snooze fest that emphasizes combat and not going off the rails while the other emphasizes creative play and engagement by the players. It doesn’t help that this is a tomb adventure and those almost ALWAYS come across to me as adversarial.

Bad die died ten ago, cursing his nephew with his final breath. Good nephew dies with a note left saying “Now my curse is almost fulfilled.” Townsfolk freak and send the players on a mission to see if the bad guy is actually dead. Bad guys tomb is just outside of town but in spite of its proximity and the rumors of the treasure horde within, it was never been looted. or Even attempted to be looted. Whatever. It’s lame. Know what’s lamer? There’s a petty thief in town WHO’S SEVENTH LEVEL who set the whole thing up so he could steal the parties loot. He’s armed with boots of stealth and a ring of invisibility and a potion of gaseous form. Why even put this shit in? Why not just state “he steals the party blind at the end of the adventure”? If you’re going to throw in some implausible shit then just go for it. It’s easier to suspend disbelief. “He’s got a medallion of blocking thoughts and non-detect alignment and fuck the players over and blah blah blah” How many times does this come up in published adventures? It’s usually some sign that the designer is a tool who can’t come up with a better reason for the bad guy or is trying to force some outcome. If you have to resort to this shit then there’s a problem with your adventure. Fix the problem and not the symptom.

Ok, on to the tomb. The illustrations makes it seem like it’s above ground. I’m on a ‘burn it down’ kick lately, so why not just burn the tomb down and then sift through the ashes? Seems easier. Or maybe just tear down the walls? “Uh, sure, I could walk through the trapped door of certain death … or we could use those horses to pull down the wall.” The rooms all generally have a trap and monster in them and sometimes some McGuffin you need to advance to the next part of the tomb. The red stone. The two keys. The black raven that crows at midnight. Whatever. It’s a pretty generic tomb with uninteresting room descriptions. The creatures range from oozes to fire salamanders to bone golems and animated statues. The usual mix of stuff that this is crammed in to a tomb that’s supposed to be abandoned and uninhabited. As a special treat the room dimensions are repeated in each room. Joy. It’s hard for to even get excited about things I SHOULD like, such as a giant corpse blocking a hallway that’s full of rot grubs. Or the OBVIOUS trapped rope in a different room. It’s interesting that the two things I like the most are the most non-generic of the encounters. The rest are lame. A room full of fire with a fire salamander. Oooohhh!!!! A Mirror of Cloning/Opposition. Wow, someone thought to put one of those in a tomb. Cool.

I should be more objective. The adventure does do something consistently that more adventures should do: it telegraphs what is about to happen. In most of the rooms you KNOW what is going to happen to you. That builds a certain type of anticipation in the players and that’s a very good thing. One of the rooms has a stairway going down with a door at the end. At the top of the stairs is a giant boulder floating above the stairs. It’s obvious what’s about to happen here. In fact, the boulder probably makes it MORE likely that the party will attempt the door. Which is more fun. Another example is the front door to the tomb. As you raise a portcullis a state inside turns a quarter turn with a loud *CLICK* the end. Or a room with a desk in it and a dead guy sitting at it, gesturing to you. This will ALL cause the party to hurriedly conspire on what to do and create one of those bizarre PC plans that generally ends in hilarity. What’s more fun, a pit trap that open under you for 1d6 or a pit trap that can be seen and forces to party to screw around for a bit trying to get over it?

Not a man of this adventure. Not a fan of these sorts of adventures even though I like the way the rooms were obvious. I do want to mention one other neato-thing though: the Rope of Spiders. It’s cursed, when you climb it the bottom begins to transform in to hundreds of little spiders that climb the rope after you. Ewwwww!! Nice one!