The Lost Staves of Maurath 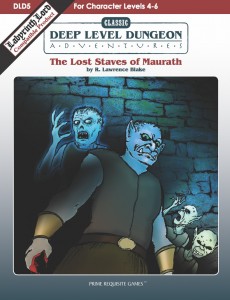 An open sinkhole under a sacred temple has revealed a catacomb of twisted dark caverns. Vicious creatures from below raided the temple of its most precious possessions, the magical Staves of Maurath.

Now the staves must be found, and an open call has been issued for a group of powerful adventurers to explore the caverns and find the Lost Staves of Maurath. However, it is believed that the caverns may echo the deadly secret of an ancient and evil burial chamber.

This is a mundane little adventure through a small temple and the caverns underneath. It’s set up to a fetch quest, combatting humanoids, undead, and clerics. It has little to recommend it, being a small bland affair.

Good temple built on evil burial grounds. Two artifact-level staves placed in temple. Temple overrun by evil dudes. Suckers recruited to recover staves and temple treasury. Why would I do this? Why would I, as a PC, not just take the staves and the treasury? “If I return the treasury you’ll give me a small reward and if I don’t return the treasury I get to keep all of the cash? Hmmmm … decisions, decisions. And If I don’t return the treasury I might as well keep the Staff/artifact … well .. that decides it then! I mean, what are the townsfolk and temple followers going to do? They couldn’t get their shit back in the first place and that’s from the gang we just killed!” These types of adventures ALWAYS end up sounding better if I replace “adventurer” with “mercenary.” Go watch “The Last Valley” and tell me that’s not a MUCH better relationship with the town!

Area one is the temple. This is a boring old affair stuffed full of goblins, bugbears and an ogre. Perhaps the only interesting thing here is the giant hole in the sanctuary floor and the fact that the temple is boarded up from the outside in order to keep the monsters in. Pulling off those boards will alert the humanoids, of course, and so the major bright spot in the adventure is: how do we get in without alerting everyone? Or, you could just burn it down. If it’s good enough for Nosnra then it’s good enough for these louts. In all there are about a dozen rooms in the temple, most of which just have a monster in them, although they do try and coordinate attacks.

The second area is the caverns down below. It has maybe twelve rooms in a simple branching design. Downstairs are… alerted guards! A big deal is made of undead but there’s only room with some in it, although killing humanoids in some of the rooms might cause them to reanimate. That’s an interesting little feature and might be cool if the humanoids rooms consisted of something other than “4 bugbear guards.” or “4 goblins with a dire wolf.” That’s a problem with the adventure in many places: the encounter is the monster and nothing more. The rooms descriptions are “4 bugbears” or something like that. That’s not interesting. In any way. That’s some kind of bullshit filler. No one is digging through this adventure thinking “gee, I hope its full of bullshit filler! I could really use some of that in my game.” There may be a place for this kind of stuff in a D&D adventure but not in a published adventure, and especially not in one this small. I’m looking at a supplement because I want something to inspire me and help me run a good game. Not for a room that says “4 bugbears.”

There’s just not much here to be interesting. There are a group of friendly evil clerics who would like you to go get their black jewel back for them (its the thing reanimating people in the dungeon.) That could be kind of neat. But then the adventure spoils it by having them attack once the jewel is returned. That’s boring. It would be much cool if they were just friendly evil death clerics and the party could interact with them over and over n the campaign, until maybe a LONG time away when the PARTY is motivated to kill them and the clerics act betrayed by the PC”s. That would be cool. The whole standard “help me then I betray you” thing is boring and is EXACTLY the reason PC’s never fall for it: it ALWAYS happens. B O R I N G.

There are three interesting magic items in the adventure and a whole host of boring treasure and magic items. The artifact staff heals the shit out of everyone when its not curing everything in the book. It has no downside and no backstory to go with it, unlike the artifacts in the DMG 1E. It is lame and overpowered. The Black Jewel is more interesting since it can raise and/or control a limited number of undead at once. That could make for some cool roleplaying. There’s also an evil holy symbol, in the form of a severed and decorated hand, that can help turn undead by clerics and non-clerics alike. That also is a pretty nifty item to find in the dungeon and bling out your PC with.

Return this shit, and all the treasure, to the town? Yeahhhh, right! Good one Wayne!