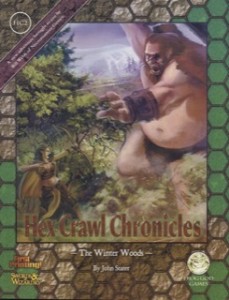 This is the second in Frog Gods Hex Crawl Chronicles series. As in the first, this is a Wilderness adventure in the vein of Judges Guild Wilderlands line. The centerpiece of the product is a map, about 26 hexes long and 44 hexes wide, each hex being 6 miles across. Scattered about this wilderness area are human settlements, demi-human camps, monster lairs, strange towers, mysterious things, and a touch of the fantastic. There are about a thousand hexes on the map and about one in ten have something out of the ordinary associated with them. The idea of the product is that the party will “hex-crawl” and adventure through the wilderness finding adventure as they go along, be it through wandering monsters or the pre-planned encounters described in the book. Sometimes deadly adventure: like many old school products, this one has a wide variety of challenge levels in it. The wise party will know when to run away and when to seek help.

This time out the adventure locale is the Winter Woods. The western portion is mountainous, while the eastern is composed of the Black Water, a sea/ocean. In between lies wooded and hilly terrain, with a few rivers. The effect is four distinct bands of terrain running form west to east. In to this we add a few elements. First are two races of men. One is indigenous to the region and fairly primitive while the other, the dark-skinned Northmen, were set on colonizing the region until their empire fell apart. Guess they shouldn’t have built their chief city on the edge of the madness-inducing Black Water. A strong theme running through this region is the Queen of the WInter Winds. This is a kind of snow queen who will one day awaken and bring with her … Well, there’s lot’s of rumors of what she will bring. Invasions of snow creatures from the far north? The gradual cold death of the world? That’s up to the DM to decide. There are plenty of hex encounters in the region that deal in one way or another with the Queen, either directly with her & her minions or with creatures & tales related to her. We get a small rumor table and a wandering table that could have come straight out of the 1E DMG … and as much as I love the 1E DMG, that’s not a compliment. It’s relatively staid and lacks the personality the rest of the product brings to the table. The Wilderlands hex descriptions were really just a sentence or two however the hex descriptions in this product range to the 8-10 sentence paragraph length, followed by s short stat block. I found the lack of detail in Wilderlands to leave my mind racing and wondering what was going on, which I loved. The charm of Tom Bombadil is lost after you read his unabridged biography. The extra detail in this version does steal away some of the wonder that Wilderlands provided, however not so much as to leave us with “generic kobold with rusty shortsword. 3hp” that is so common in modern games. The detail is enough to get you going but leaves a lot left for the DM to work with.

The land has a more fairy-like feel to it than a typical D&D game. Elves are more fey-like, dwarves have grey skin, twinkling amber eyes, and hair like spanish moss. There’s an encounter with a group of pixie-dragons; miniature dragons with butterfly wings that are frolicking in a seeming endless field of coneflowers. Those are the sorts of encounters that can add the wonder & excitement of the unknown back in to your game, and THAT is exactly what I’m looking for in a product.  This product brings the Old School vibe hard. Lot’s and lot’s of special encounter details are present. Things like an idol that, when touched, drains blood from the user, and a level, like a vampire and in return a hoarse whispering echoes in the characters head, warning of an impending doom. Or, maybe, an old ships compass found embedded in the forest floor that is broken … it always points towards DEATH! Or how about the hex that, on moonless nights, has 13 wraiths that look like decrepit old people who wear wraths of black roses and have iron nails for teeth that waylay travelers … and they drain magic levels instead of character levels. This is the sort of originality and sense of wonder that the mainstream game somehow lost along the way in it’s various editions, and I’m very happy that it’s surfacing again.

My complaints are much the same as with the first in the series. The map in this printed product is better than the one in the first, but it’s still very dark and difficult to read. I suspect it is color in PDF and that’s not translating well to the B&W print copy I have. I would love to see things organized a bit better, either with the various settlements grouped in the beginning, or the various encounters actually denoted on the map with a back dot or some such. This are just quibbles though. The booklet is a fine product either to be used as an adventure locale or mined for the fantastic encounters that can be placed in to a DM’s existing game.