HC3 – Beyond the Black Water 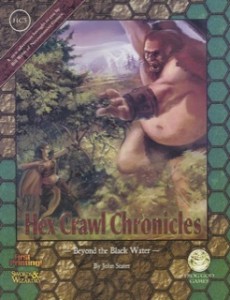 This is the third of the Frog God Games Hex Crawl series. It’s their take on the Wilderlands style play that Judges Guild introduced back in the mid to late 70’s. For those of you new to this style of play, the product introduces a wilderness region that is presented on a hex map. The wilderness map in this product is about 36 hexes wide and about 23 hexes long, with each hex being 6 miles wide. The party travels through the hexes and has wandering monster encounters. A certain number of hexes, about 10%, are described in more detail in the module and have some sort of mini-adventure or something else unusual associated with them. The DM can use the region as a home base, locate his own dungeons & adventures in the area and use the booklet encounters for local color, or just mine the product for adventure ideas. The original Wilderlands products just had a sentence or two that described each hex, while this line of products has short paragraphs of 8-10 sentences, usually followed by a stat block, for each hex.

This time around the module describes the land beyond the Black Water. the mysterious inland sea called the Black Water was first encountered in HC2, the Winter Woods. The natives lived in fear and dread of it’s shores. Now to get to see what it was all about. Beyond the Black Water lies the Land of the Dead. As the product explains, it’s both of the mortal world and beyond the mortal world. It’s shrouded in twilight, with the moon rising and setting like the sun does in the normal world. The souls of the dead wash up on it’s shores as spirits made whole and trapped in lifeless bodies. They make their way north, and are harvested by the various denizens on this land. These include the nine Petty Deaths that roam the land and compete with each other (Factions! I love Factions!), the bizarre robed humans in their black ark ships rowed by crews of the dead, and the various and sundry folk who make their home in this land, but all of whom pay homage to one of the deaths or another. The half page of adventure introduction in this book really goes a long way or conjuring up a world both real and bordering on the fantastic.

The southern edge of the map depicts the black water, with moors on the edge, with a narrow band of steppe’s bordering it, and then a wooded area following, ending in the northern edge being covered by the badlands, giving the effect of five separate bands of terrain. There’s a rumor chart for talking to folk, and another or the bordering on boring wandering monster charts. Perhaps this is necessary though, in order to the give the hex encounters the sense of wonder thy deserve? You need a normal with which to frame the Fantastic? We also get nine new monsters with new unique powers for the party to figure out, and non-standard magic items. For example, magic shields with intelligence & ego’s which force their desires, or try to anyway, on the wielders. Magic swords that absorb the essence of incorporeal creatures and can repel them when the swords are struck together. Those are MAgiC ITEmS! No generic “+1 shortsword” in this module, but magic the way it was meant to be: mysterious, bad ass, and a little dangerous! The various hex encounters follow suit: a sense of the fantastic, unique rules, and a touch of the bizarre. For example, there’s a Marlith skeleton in the ground. Digging her out, perhaps to get at the magic swords she seems to carry, will do a Fifth Element style flesh recreation on her … and she’s gonna want her swords back. Or how about the hex with the floating death alter, containing a group of satyrs and a death priestess nymph? She had things painted on her palms that do bizarre magic, ala Pan’s Labyrinth.

The complaints are the same as the first two in the series. The printed maps are too dark. I suspect that the PDF version is full color and the colors are not transitioning well to a greyscale printed map. The result is hat the map is hard to read, to the point that the terrain markers and hex numbers are almost illegible. I really wish also that the hexes had some notation that further detail was in the booklet; something like a black dot in the hex or some such.

This is another fine product from John Stater. He seems to have the market cornered on Wilderness hex crawls, with seven more planned in this series and 9nine or so in his Land of Nod series. Good stuff! These are among the best resources I’ve seen for RPG play. They rank right up there with ASE1 and the Gygax, Kuntz, Jaquay material that I have.