HC1 – Valley of the Hawks 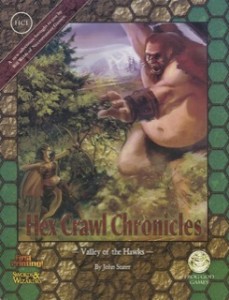 Near the dawn of the D&D game there were a set of supplements put out by Judges’s Guild under the Wilderlands name. These were a new thing: a large hex map of the wilderness with many many details on the various hexes. The descriptions only ran a sentence or so. For example “Partially buried in the sandy seabed, a ships figurehead of a sea nymph holding a scimitar.” These went on for page after page. There were also tables listing all of the villages in the region, the castles & strongholds, creature lairs, and an assortment of rules for caravans, ruin generation, and so on. Kind of a cross between the island adventure in Isle of Dread and those “101 adventure plots” books. The density of the books were staggering; there must have been a thousand hexes detailed in some of those booklets. All of them with just enough detail to tease the imagination, but describing a real physical sector around the City State of the Invincible Overlord. At some point the idea behind the product died out and imitations from other companies seem non-existant.

Until now. Valley of the Hawks is clearly built from the same primordial model that Wilderlands used. Where the initial Wilderlands booklet described about 5 sectors, this product describes but one, and does so in way that provides more detail and is slightly easier to dig through. The sector described is about 25 hexes long and about 40 hexes wide, each hex being 6 miles across. The valley is a borderlands locations, out on the frontier. Ruins from past civilizations lie scattered about, along with some human settlements from a couple of different cultures, and some demi-human settlements. The elves, in particular, are interesting in that they belong to that faerie sentiment of old, being slightly mystical creatures or fog in dazzling raiment. There is a short section on caravans and a good rumor table, and a slightly staid wandering monster table. This is followed by the meat of the product, the hex descriptions.

We get about 60 hexes detailed/described, out of the 1000 or so on map. These range from human settlements, to ruins and monster encounters, to the weird & bizarre details that could have come straight out of the Wilderlands. The Wilderlands details were short, a sentence or two for most hexes and just a table for villages and lairs. These descriptions are longer, a short paragraph of 7-8 sentences followed by a stat blocks for the creatures encountered. Obviously things are fleshed out a bit more for the DM, however that sense of winder that came with Wilderlands is still mostly intact. Besides the community descriptions and monster lairs we also get a good selection of the strage. Things like stone circles which can give visions form the gods, statues & pools which can do strange things, and so on. One of my favorite encounters is with an undead creature who stalks a river and lures creatures to their drowned doom, just as she/the creature was in life. Wilderlands had a “fantastic” feel to it, like the bizarre mish-mash of 70’s fantasy movies & cartoons. The land from the cartoon Wizards or Wiz-World form Warlord. This product has a more grounded feel to it, and the additional encounter detail detracts even further from that “fantastic” feeling. That’s not to say it’s bad, but it is more grounded in the traditional tropes of modern-day fantasy although the fantastic is still lurking there, just under the surface of the encounters. Plus, the product has a Temple of the Snake Men. How can you not love something with a Snake Man temple in it?

The organization of the product is a bit of a problem. Everything is scattered through the booklet with the encounters detailed in order. I perhaps would have preferred that the book be organized with the villages/civilized encounters listed in one section and the other encounters following, or perhaps further divided up the map in to additional quadrants in order to group the encounters by region. Compounding the organization issue is the map. The printed copy of the book has a map which is hard to read, being too dark, and it appears that the adventure locales are not marked on the map in any way, just the various terrain type. Again, I probably would have preferred something like a village marker, or even just a black dot in the hex to denote that it’s the site of more information in the book. As it is, I’ll have to go through the map myself and make all of those notations … if I can find a decent copy of the map that’s not too dark.

This is a good product. The valley could serve as a kind of home-base for a nice sandbox campaign, with the DM scattering other works throughout the area and expanding on the encounter synopsis given. It can also be used as one of the better Adventure Seeds products and mined for interesting encounters that the DM can work in to his own campaign. I myself am unlikely to ever sell my copy; it will earn that rare privilege of going up on the bookshelf along Wilderlands and my other stellar works from Gygax, Kuntz, and Jaquay.

3 Responses to HC1 – Valley of the Hawks