AA#09 – The Lost Pyramid of Imhotep 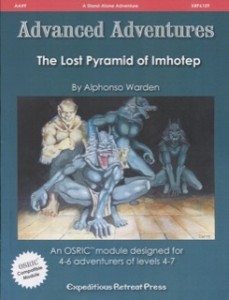 This module may be the most well-researched adventure I’ve ever seen. The attention to detail is stunning, as is how the underlying mythology is portrayed in the makeup of the adventure. Imagine for a moment that dungeons were real; created by real people and were a part of the time and place in which they created. This is one of those dungeons. Imagine also that you are a real person who discovers that dungeon; how would you go about about exploring it? Well, that’s how you’re going to have to tackle this one as a player: very very carefully.

First, the basics. This is an adventure for 4-6 characters of levels 4-7. You get 12 pages in this product, with 1/2 page of license, a table of contents page, and a page of background/introductions. That leaves about nine for the keyed encounters, of which there are about nineteen. The map is very linear, essentially a straight line over six levels, with a couple of rooms in a straight line per level. There are tricks & traps and a few encounters, which makes the module most similar to a tournament event product. Players with post-graduate degrees in Ancient Egyptian Funerary Rites will greatly add to the success of the characters.

What we have is a funeral complex for an ancient egyptian architect. As such your characters are literally tomb robbers who will be plundering something akin to one of the great pyramids of Giza. Well, if the Giza builders had access to magic, their gods were real, and they were a little more blunt in displaying their faith and loved physical allegory. You know how at Stonehenge the rising solstice sun is right above some particular stone, or some such? Or how the egyptians buried their dead with objects so they would have them in the afterlife? Let’s think of those two examples and put them in to game terms and then locate them in this adventure; they’d fit right in.

The complex is laid out, I suspect, to mirror the journey of a person through life and their soul through death. As you get deeper in to the complex you get closer and closer to the boat ride to the end and the final destination of your soul. Thus the complex and adventure is a physical manifestation of the mythology of life, death, and the journey of the soul through the afterlife in ancient Egypt. With a light emphasis on “life” an “Death” and a heavy emphasis on the journey of the soul. The information required to pass the tricks, traps, and encounters will almost certainly NOT be in possession of the PLAYERS, unless your group added that PhD guy I suggested earlier. What your players have then is a REAL tomb to rob, just like real people would. Well, like they would if they didn’t just dig a hole to the middle through the bricks like they did in Giza. If _I_ were exploring a tomb I’d bring some books with me, have the phD guy with me or on a cell phone, and hire some guys with guns to go first, which is also the characters best bet if they want to win through. Multiple raiding attempts in order to solve the puzzles correctly, a Sage on call, and plenty of Augury and Contact Other Plane spells. Certainly nothing wrong with that approach; kind of like exploring the Tomb of Horrors over a period of several years. That might be fun in a campaign: put an ‘unbeatable’ dungeon somewhere in it that CLEARLY means certain death, and let the party explore it one room a month, or year, over the life of the campaign, at their own pace. How about some examples?

In one room you meet a statue who asks the party some questions. Note that these are not riddles; the answer can’t be figured out from the question. It’s more like Egyptian trivia. Normally some kind of hint is given prior to arriving at that point, like murals, or mosaics or something. Not in this bad boy. Either you know the answer or you don’t. So kids, the Ibis-headed statue wants to know “What animal must the wise man emulate?” Do you know? There have been no hints thus far in the adventure. You could guess … but … Ok, you may now use your Augury/Contact Other Plane or go back to town and get your PhD on the line. There are multiple rooms that put the characters and players in a similar position.

There are a couple of rooms with magical vehicles in them. I strongly dislike those things. A joystick that looks like a pyramid with three gemstones: one to start the flying machine, and a couple more to shoot it’s guns. You then get to have a magical dogfight with three other machines. If you win, the door out opens. (Which is a repeated theme; the door out of a room doesn’t open until you: answer the riddle, or kill the last snake, or some such.) There’s another room later on with the same such in it. Which reminds me, there’s a hallway that, when you enter it all of your breathe is sucked out of you: save vs. spells at -1 or die for every round you are in the corridor. No warning at all. Hope you sent your lackey first …

I shouldn’t forget the mono-molecular bread kitchen. There’s also a couple of nicely evocative images near the end that I won’t ruin, but it should completely freak out the players and awe them. The characters reward for making it to the end? Eternal life. Nice!

This reminds me of Tomb of Horrors, but requiring significantly more meta information about the culture of ancient Egypt. I understand that Robilar defeated the Tomb through the “use” of his orc lackeys. They would help here also. There’s no way this adventure can be handled by a group of 4th level characters in a single session. Augury only gives you a yes or no and Contact Other Plane is a 5th level spell. That’s the only way anyone is getting through room 2 unless you allow google at the table. If, however, I place this as “the unbeatable tomb” and allow/expect multiple forays in to it over several months of campaign play, then I can see it easily working and being a very nice goal for the players and their characters to achieve.

This is available on DriveThru