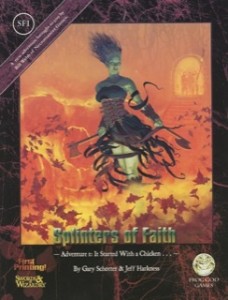 This adventure is the first in the Splinters of Faith adventure path. There are ten linked adventures that should take characters from first level to fourteenth or so, although they also appear to be easily adaptable to drop in as singular adventures in any game world. This first adventure is for a group characters from first to third level. The publication is fairly brief, at 17 pages or so, with type large enough to be easily read by my aging eyes.

The first eight pages or so are devoted to the background and history of the adventure path, along with the table of contents and rights pages. The background is fairly standard fare: Evil High Priest tries to take over world, forces of good “defeat” him, a tomb is built and eventually forgotten about. I’ve read through a lot of these introductions/backgrounds and this is one of the better ones from a readability standpoint. It also includes a nice description of a non-standard magic item, which would be termed an artifact if it were compared to those entries in the 1E DMG. I happen to like this sort thing; non-standard magic items make life more interesting for the characters and provide quite a bit more atmosphere for a campaign.

A small village of dirt farmers is provided very briefly. Essentially we get a brief description of the tavern and a little more for the temple, with a very brief overview of the other dwellings in town. There’s not much to the village and not much description provided so this is NOT a ‘home base’ ala Homlet or Against the Cult of the Reptile God; at least not without quite a bit of additional work by the DM. The adventure hook did stand out though, as did the two if the NPC’s up at the temple, which I found very nice & evocative. Think of a tavern in a dying agriculture community with a bunch of farmers sitting around complaining about the village gossip, including their chickens going missing. The reward offered is a bag of potatoes and a jar of pickled eggs. Nice! The village priest and his wards are likewise given brief descriptions, just enough to bring the encounters with them life but not so much as it’s a slog to wade through. Overall we get about 2.5 pages of village description.

There’s a brief encounter outside of the dungeon and then 15 or so keyed encounters inside the tomb. The tomb map is well done but it is certainly not a complex looping map. The undead inside the tomb, and the environs they live in, are very nicely done and leads to a very sinister feel to the tomb. The only strangeness I found was that the undead have not exited the tomb yet, but one can always say their source of power is the tomb itself. There’s about 4.5 pages of dungeon description.

This is a small adventure but much much better than many of the larger ones I have read. The farmers in the tavern got my imagination going, as did the NPC’s at the temple. Combined with the encounter outside the tomb and the undead in the tomb it produces a nicely evocative adventure that does not feel forced at all. Those small attentions to detail really catapult the adventure in my upper tier. I have no qualms with recommending this adventure.