Footprints #15 – The Haunted Inn of the Little Bear 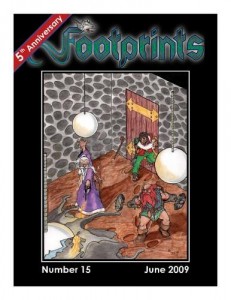 This is a short adventure through a small haunted roadside inn. It has a couple of decent elements but devolves in to “find and figure out the one clue we need to get the treasure.” It suffers from text bloat.

While traveling as caravan guards the party hears a story one night of a nearby inn that’s haunted, and rumored to be full of coin. They can pop over during the night and explore the inn, getting back in the morning to continue their service. While the read-aloud backstory is insufferable the whole concept is a good one. You’re caravan guards/travelers and each night the other guys tell stories and the like to pass the time. One night after a particularly gruesome story one of the guards says “Don’t take my road for it; there’s the road that leads to the inn” That’s a pretty decent little set up. It’ takes a page and half to get there but the seed of it is good because it’s a classic. Telling stories, daring your buddies, and taking a detour while at work? Great pretext.

The inn has two levels, a burned down smithy, a ruined stable that a tree has fallen on, and, inexplicably, a jailers cage out front. Herein lies the second cool feature of the adventure. The boney rags in the cage rise up to reveal an undead who pleads for freedom so it can avenge its death. Woah! That’s a different sort of undead. It doesn’t just kill the party? It’s not just a mindless automaton that exists to get slaughtered? It’s actually undead for a reason and asks the group for help?! That’s a nice touch and the group that helps it will find the inn adventure just a little easier since he summons the souls of the other dead inn ghosts, those that want to be avenged. Undead dude gathering unjustly killed other undead dudes to seek vengeance? Another classic and well worth a tip of the hap. This is the sort of thing I’d love to see more of in D&D. Not just something to hack down but creatures with a motivation that the party can take advantage of. It’s a puzzle! It’s a social encounter! It’s a monster! No, it’s all three! Yeah! ANd it’s SOOOOO much more interesting than just having the undead rise up and betray the party or attack them. Where are they going? Who are they avenging? Who screwed them over? Those are the kind of mysteries that fester in the back of the players mind, their unconscious minds working to build up imagery and stories to explain them away. Score!

The rest of the adventure is a bit of a let-down, but those two beginning things are hard to follow. Just some empty inn rooms with overly-long description, a couple of carrion crawlers and some giant bats. At best the party will find a clue to a secret treasure room. That’s good, it rewards careful play and players LOVE it when they can figure something out; like the clue to find the treasure room. There’s another good bit where the skeleton/bodies on the first floor animate and attack as the players enter the cellar, the party hearing them drag themselves across the floor on the first and approaching the stairs down. That’s a nice bit of build-up.

The mundane treasure is great; trade goods, spices, tools, etc. It’s bulky, hard to haul away, and obviously worth cash. That creates the kind of complications I like. What about your job on the caravan? How are you going to haul it all away to sell? Not so much a screw job as an interesting complication. The only magic item is a simple +1 dagger. Straight out of the book but at least it glows in the dark. There’s a decent little follow-up to the adventure where the party hears of a large group of undead that attacked a certain keep and killed it’s owner before collapsing in to dust … another great reminder that the parties actions have consequences. And, parties LOVE to hear their exploits. 🙂

The inn proper can be a bit boring, and perhaps needs some fast play to move through parts of it. It’s surrounded by a surprisingly decent amount of good material