Footprints #13 – Tower of the Elephant 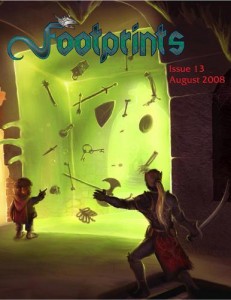 The shimmering shaft of the tower rose frostily in the stars. In the sunlight it shone so dazzlingly that few could bear its glare, and men said it was built of silver. It was round, a slim perfect cylinder, a hundred and fifty feet in height, and its rim glittered in the starlight with the great jewels which crusted it. The tower stood among the waving exotic trees of a garden raised high above the general level of the city. Robert E. Howard: “The Tower of the Elephant”

As the blurb suggests, this is an homage to a Conan story and involves a raid on a wizards tower. A bit wordy but it mimics the style of the Conan stories well: human guards, vile sorcerers, strange beasts, all wrapped up in a tower shell. It’s best when it emulates the source material and the worst when it tries to provide detail on things missing from the Howard. But that’s a guess based on not having read the Howard story behind the adventure.

The temple district of Arenjun, the notorious City of Thieves, houses a strange tower said to have erected overnight by sorcerer Yara. Three hundred years old and possessor of the fabled Heart of the Elephant jewel, no thief dares an attempt to steal it. If that sound cool it should. It’s from a Howard story and so forms the basis of our hobby; very close to the platonic forms of D&D. Therein is the strength and weakness of this adventure. When true to Howard it has some VERY inspiring language attached to it. When going beyond that it is lacking. Further, it’s not clear to me that the iconic imagery can be communicated to the players and bring them in to the fold.

There’s just a tower in a named city; the background here is very spartan. I suspect that reading the story would help some but you do get enough of a sense of the city: its every city in every Conan story you’ve ever seen ripped off, from the books to the movies to every Conan adventure and RPG. There’s a rumor table with seven entries that bring the Conan also: Even the king of Zamora fears Yara’s power. The king drinks heavily to dampen his fears. Together the rumors build up a fearsome reputation; I sincerely hope that any group of players in this adventure hang out A LOT in taverns. The rumors, taken as a whole, are just too good to leave sitting in the adventure.

The tower is surrounded by a double wall with human guards during the day and lions at night patrolling the grounds. SILENT lions at that. That’s pretty cool; I always dig human-centric adventurers and tossing in some lions only makes the Conan elements seem to spring to life more. The maps are just a a tower map, a couple of stairs on each level and a balcony that can be the target of a grappling hook are the extent of the clever mapping. The interior descriptions range from very good mimicry of Howard to poor padding. “The stairs lead down to 5-1” or “the stairs lead up to 3-2” is not inspiring text. Nor is a listing of the contents the mundane things in the armory. Bronze doors, floors of lapis and green forgotten doors of bronze do much better job of communicating the flavor.There’s a spider-god temple and a strange elephant man, the mad sorcerer and a blobish zombie to temper the mundane and weird it up. These elements al feel right at home; presumably because they were in the Howard story.

What’s not at home at the bullshit D&D elements. IE: Deviations from the Howard are weaker elements. Giving all the human guards +3 leather and magic swords helps the designer explain, mechanically, why they have a lower AC. It’s also a huge pain in the ass to deal with the consequences, hard to explain, and doesn’t fit with the Howard. How about … giving the guards a +1 to hit or 1 more HD or just giving them a lower AC? “But! Bt! But that’s not kosher with the rules for AD&D!” Fuck the rules. You’re the DM, you can do anything you want. It’s magic, you ain’t gotta explain shit. In fact, NOT explaining helps communicate a weird and wonderful setting better than explaining. There’s gotta be mystery for the players minds, and the DMs, to fill in. Wonder & Whimsy are not derived from 18 identical sets of +3 leather and +1 swords. FUCK. THE. RULES. This problem extends to the magic items. They are boring. Portion of healing. Potion of heroism. Necklace of prayer beads. Ring of protection. +3 dagger. B.O.R.I.N.G. Dude is supposed to be some kind of reprobate sorcerer, give him some reprobate sorcerer shit. not a bunch of book items. The mundane treasure is better, and from the Howard I’d guess. Gold from the mines of Ophir and file silks from far-off Kjitai mixed with Kothian silver … now that’s the kind of flavor-text loot I can dig!