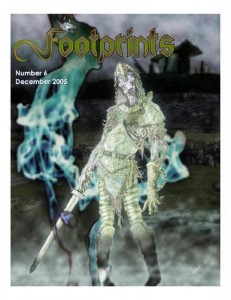 This is a short little adventure in an abandoned wizards tower. It has a slow feeling to it, or maybe its melancholy? Anyway, the adventure is full of stone artifacts and treasures that fit that theme. There’s not a lot of monsters, or action for that matter. A great many of the rooms could be classified as puzzles, but not in the ‘in your face’ puzzle sense. Maybe ‘obstacle’ is the better word. Something like: If you know two animated statues guard a door then how do you get through the door? This might make a fine little side-trek on a hex map.

This adventure has a little throw-away hook that is really quite meaningless. Something to effect of ‘Eliminster tells you to go check out an old wizard tower the city just sold. You can keep anything you find.’ It’s a throw-away and not needed. The tower is just a place that the party can go adventure in. They stumble across it and in they go looking for loot and trouble. The best kind of adventure. I can totally see villagers that the party stumble across relating the tales of the old abandoned black tower. Ward does a decent job in creating a memorable first site. A three story ebony tower with two giant statues flanking the door. Each with a mace. Each with blood on the mace head. And a bell hanging out of reach of the party, above the door. That’s a great little visual image, and Wards read-aloud does it better justice than I could. The adventure is full of read-aloud, but, strangely, I mind it less here than in other adventures. He generally keeps it short and in many cases doesn’t expand upon anything. For example, there’s a room with three sentences of read-aloud text, including a brief note about a pulley system on the ceiling for moving stones. There’s no further text; the next entry then starts. That’s all there is to the room. And that’s all that needed. It’s just on the edge of being too much read-aloud, and the left is left for the DM to fill in, exactly how bullshit read-aloud should be. There’s a lot of empty rooms. There’s a lot of read-aloud. The initial tower description portion of the read-aloud works better than the rest. It does a good setting the tone but the room read-alouds don’t really deliver and could have been left out.

The encounters are more obstacles than traditional (IE: sucky) adventure encounters. The groups success will hinge on recognizing what they should leave alone and in making friends. IE: the usual shit. This isn’t a Raggi-fest of ‘hahaha! the only way to win is to not play! hahaha!” but rather a series of things that the party should know better than to mess with. Hmmm, guardian columns outside of doors with bloody swords. Hmmmm, flowing sand, almost like it’s alive. Hmmm, vampire statues sucking blood. And then, recognizing an ally. When a statue talks to you and asks you to free it, do you? If you could command an army of slow-moving statues, how would you you use them to navigate the harder portions of the tower? Are you gonna make friends with the asshole statue in? Better, he has the 411 on the tower … And so the adventure is a lot of empty rooms that occasionally have statue-things that animate. Your success in the adventure will relate to how you use what you find to conquer the environment. *GASP* A D&D adventure! It’s either a deathtrap or an exercise in creative problem solving, depending on how it’s approached and the level of the characters.

There’s a map issue; the last room, the treasure room, doesn’t show up. While I would expect an Ebony Fly in an Ebony Tower, the rest of the treasure is mostly a little lack-luster. There’s a head turned to stone that the DM could come up with something for. There’s also some masonry tools that MIGHT be useful in another adventure. They chew though rock at a magical rate. They also make A LOT of noise. I LOVE magic items like that. “Do we REALLY want that? I know it’s cool, but …” Also, I wonder just how much trouble the party can get in to with two caged cockatrice? Now THAT’S a treasure worth having!

1 Response to Footprints #6 – The Ebony Tower