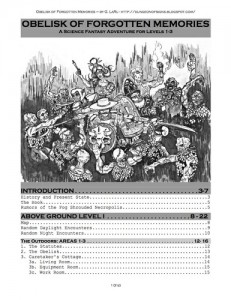 Warning! This is gonzo/ASE and I LUV gonzo & ASE!

This is an exploration though a graveyard complex full of factions, ASE1 style. Coming in at 53 pages it is also deceptively small with only about 20 pages devoted to the keying and the rest being background and play aids, random tables, new monsters, new items, etc. The settings doesn’t quite seem large enough to support what’s going on. It’s a kind of smaller ASE1-style Bonegarden. That’s a compliment. Gus needs to learn how to use two columns and a smaller font, but that’s a minor complaint. It’s probably closer in theme to adventuring in a town full of rivals then it is a dungeon adventure.

Ine ASE1-land there’s a old war memorial that once broadcast the names of some honored dead up in to space. It’s been turned in to a general funerary complex and is the home to three gods of the dead who share it. God of the Dead #4 invaded and drove out the other three gods followers. Two of them cared enough, for different reasons, to strike back and be a pain in the ass to #4. #4’s plans for the complex are now slowed down as the forces of the three remaining gods conduct a kind of hit & run guerrilla war on each other. All while trying to gather new bodies to bolster their forces. This being ASE1-land, no one is really good or evil. Oh wait, I forgot, the complex was also the home to one of those bat-shit crazy ASE wizards in between its war memorial and Gods of Dead phases.

You know what this place needs? Some player characters wandering through and stirring up their own style of mischief! What follows is some pretty classic faction play. Three groups at war, a fourth party (the closest thing to stereotypically ‘good’) not really giving a shit, and the PC’s being confronted with the … lifestyle choices, of their chosen side(s). Except this time all of the factions are death cults, and not the watered down undead from Bonegarden. This is the full on gonzo gross guys that fit in well with the whole Korgoth/ASE1 vibe. You want to be moral? Fine, but the high road is a harder one to follow. I don’t know how much more classic you can get than that.

The hook is a mostly unrelated fetch quest, made a little more interesting by the giver and her place in an ongoing campaign world. It’s explicitly mentioned how she might be used in the future. This is, of course, always an option in every module but I still appreciate seeing it explicitly mentioned as a nudge toward doing the right thing with campaign continuity. The map of the funerary complex seems small to me. Essentially its a standard piece of graph paper with seven locations on it containing three faction bases and some other places. I don’t think that’s large enough to support the background conflict that’s going on here. It would be pretty simple to create a new larger map and drop the seven locations in to it. The interior maps are either simple mausoleum buildings, akin to a modern mausoleum layout, or a linear underground tomb. Many of the designers PDF’s deal with small lair type dungeons and the locations here are similar in their small-ish design and layout. Which is FINE for a lair. Not everything needs to be a megadungeon. (Ooooo, but what if EVERYPLACE was an entrance to a megadungeon? That would be cool!) There’s a daytime and nighttime wandering table with some decent variety/ghost encounters in addition to the faction and vermin encounters.

I’m not sure what to say about the various encounters. They are bizarre? I mean, it’s an ASE1 graveyard with a lot of history. Parasitic aliens in desiccated children’s corpses? Check. Uh, undead meglomanicial wizard wanting to rise again? Check. ASE1-style Ossuary? Check. Giant Tesla Coils? Check. I think you get the idea. Beyond the faction play there is a lot of other stuff to play with also. Random grave robbing tables, memorial tables, special tomb tables and more. It’s a pretty bitching place with a variety of things to mess with, interesting encounters and rooms, and a variety of nice (and mostly simple) traps. ‘Log to the face when opening the door’ is a favorite of mine. The rooms take up a decent amount of each page. I’m not sure if that’s the font/1-column layout or some verbosity. Maybe some of both. It’s a non-standard environment that is richly detailed but doesn’t feel like excess. Except that also makes it a little harder to run during play as you hunt for the room contents/core description. But there’s a lot in the rooms to spice things up. Tarps on the floor to be pulled, braziers to kicked over, weird ASE1 shit … how can you ditch that stuff?

The monsters are pretty decent. There’s only three in the appendix but they are all featured in the adventure, appear repeatedly, and have good special attacks/defenses. I generally like new monsters and especially in something in a world like ASE1. Most of the other creatures have at least a hint of the non-standard. Riding frogs. Ghost Drummers, the Beast of Bezonaught. I think a Wraith might be the most standard thing encountered. The new magic items are varied, interesting, described well, and have nice effects. There’s no mistaking you are in ASE1.

So, a little cramped on the surface map and some throw-away mapping but otherwise a great module … which is actually probably closer to a town adventure than a dungeon.

2 Responses to Obelisk of Forgotten Memories