DF31 – Garden of the Hag Queen 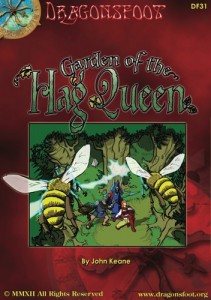 The Hag Queen has ruled for centuries and her baleful garden blights the landscape. Can you survive it’s inhabitants?

This is a wonderful little evil fortress set in an evil garden near the edge of an evil empire. It’s got a bit of a fairy tale feel to it at times, kind of like Mortality of Green. The bulk of the inhabitants of the fortress & garden each have a personality that could make this almost like a town adventure. It is certainly one of the best Evil Fortress adventures I’ve seen. It’s what all of those Castles & Crusades adventures should have been.

Lately I’ve come upon a couple of adventures that more resemble good towns than a traditional adventure module. That’s a compliment. A good town is full of interesting people each of whom have their own little thing going on. They hate some of their neighbors and in love with others and jealous of others and want to expand their business or find their lost aunt and so on. They interact with the other townspeople. This makes the place seem alive. It seems much more like it’s a real place with its own thing going on that the characters just happen to have stumbled in to. There are very very few good towns described in RPGlandia. This adventure has one … but it’s not a town. It’s an evil fortress/outpost. What results is one of the best evil outposts I’ve ever seen described. That allows for some pretty sophisticated uses to be developed for it. It’s like it’s a real place and you, as the DM, can attach some pretext or reason for the party to be there. Visitors or an embassy. Buying goodies. Captured and prisoner. This place can support many many different hooks. “Go kill shit” is most boring. Factions within factions within factions.

There’s this hag queen and she’s got her evil kingdom. As a part of that she’s got this garden outpost she planted long ago and her peeps harvest stuff from it and send it out. A touch of the fairy tale and a touch of the 2e magical economy. I’m gonna let the magical economy crap slide since the rest of the thing is good. Inside the garden are the plants and “plant-like D&D things” that the outpost inhabitants harvest for parts. Also inside is a small island fortress, the evil outpost proper, with several buildings in it and a small “undergarden” and a couple of simple basement/dungeon levels. Outside the forest is a wood and then the more civilized lands. That’s the basic set up. Kind of like you took Garden of Plantmaster and mashed it up with one of those fortress MERP supplements and then combined it with one of the good towns with factions in it, etc. What you would have there is a sweet ass place to have adventures. And that is, mostly, what this is.

Let’s get the bad stuff out of the way: the maps suck. They are small, they are boring, and not complex. The whole ‘fantastic garden’ thing is not conveyed at all via the maps. Both the aboveground portion and the below ground portion, “the undergarden” have this problem. The buildings that make up the outpost come across as little more than a couple of 2-story buildings. Lame. No fantastic gardens. No size, scope, or scale conveyed. lame Lame LAME. As for wanderers, well, this is where the special nature of this adventure starts to show up. There’s a section for encounters near the garden. Essentially this is a couple of werewolves in the forest, a trade caravan heading to/from the garden, a Lizard Man embassy heading to the garden and wood imps patrols that ride giant spiders. Cool! [As an aside, a creature riding anything other than a horse seems to elicit a ‘cool’ comment from me.] And these are not really wandering monsters, just some guys that could be heading to the garden or are nearby. ALL sorts of possibilities there. Join the caravan or lizard men, hijack one of them, make friends, make enemies, capture and interrogate … and the whole infinite possibilities that the batshit players will inevitably come up with. Opportunities. And unlike some products, these don’t seem forced at all. The garden proper DOES have wandering monsters and they fit in pretty well. Pests for the most part, all a part of the Potential Energy Drama which the characters are about to take part in.

The upper garden has 21 locations. The undergarden tunnels eleven more. Not a huge expanse. The locations don’t feel like traditional adventure. It’s mostly a small collection of pest locations or some plant/thing to be harvested. Again, more of a setting. “Let’s watch the slaves harvest the sundew” or “hey slave/pc, go harvest some grab grass”, etc. The notes all have some comment about how the plant/creature is used/harvested or why they are a pest and what the outpost guards do about it, etc. In other words, it’s building a little world up that the part can interact with. It DOESN’T have the feel of a series of hack encounters. It’s like the encounters are more integrated with the purpose of the location and the everyday life in the garden/outpost. Get it? It’s a place, a setting, a sandbox, a locale. All of those words are used to describe crappy linear hackfests but in this adventure they tend much much towards their more positive open play connotations. This makes most of the encounters none too special. These are not massive set pieces or diabolical traps or the like. But as whole they work together to create this mini-world just waiting for non-linear interaction.

The criticism here is two-fold. First, it doesn’t take the garden concept far enough. It doesn’t feel like a garden. It feels like a fake D&D garden. That’s probably good enough for play … it’s just nothing like the Plantmaster garden or the Barrier Peaks garden, or even a good fungus forest. That bleeds over a bit in to the items. It would have been nice to see a few more plant or animal based fantastic or magical items. There’s still an underlying tone of vanilla running through the place. Vanilla is the wrong word … It lacks a certain FLUFF nature. The items that are in the adventure are pretty good, some new dust, some nicely described magic items and mundane treasure. These are almost textbook examples of how to do mundane and magic treasure right. It falls down a little when it comes to the items equipped by the outpost defenders, but are otherwise good examples of how to do decent magic items. We’re nto talking Sword of kas here, but still good items/descriptions.

The second criticism is the organization. The personalities are described in the in individual rooms. This thing could have used a one-page tear out of all of the people, some personality, and their usual schedules. The best parts of this are the potential for interactions and that needs a different format then just listing the people in their bedrooms. Similarly, a little more attention could have been given to slave work schedules, guard schedules, routines, etc. While the personalities are great, and the garden tasks are great, the routine that goes along with them could use some beefing up. This can be solved by spending a few hours with a notepad and highlighter, or the designer could have done it for me. 🙂

2 Responses to DF31 – Garden of the Hag Queen