WGH3 – Into the Howling Hills 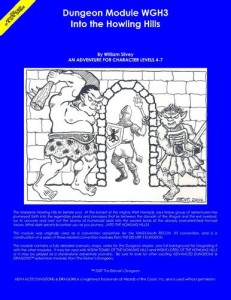 The fearsome Howling Hills lie before you! At the behest of the mighty Wolf Nomads, your brave group of adventurers has journeyed forth into the legendary peaks and crevasses that lie between the domain of the Weguir and the evil overlord, Iuz to uncover and root out the source of humanoid raids into the sacred lands of the already over-stretched Nomad forces. What dark secrets lie before you as you journey…INTO THE HOWLING HILLS?

This is a pretty simply linear hack through a bugbear lair with roots in a tournament module. It has a notable feature in that you can get on the dungeon GREEN line from either room one or room 26. Otherwise it’s just a straight-up hack that turns in to a mass combat as the bugbears strike gongs and summon help.

This adventure has a pretty brief introduction, a change from the designers earlier works. All of the background and notes are contained on a single page. Yeah! It’s still full of things like “you should have four fighters and two wizards” that I find ridiculous. Anyway, in this installment, the first of three, the Wold Nomads have sent the characters in to Iuz-landia to destroy some stockades. They are “too weak” to do it themselves. *GROAN* This, people, is what comes from Being A Hero. Boring nonsense crap. I *LOVE* the concept of Iuz. I love everything about him. Unfortunately there’s nothing cool about Iuz in this. Not even his mortal enemies, the Wolf Nomads. No instead they get turned in to a bunch of idiots who have to turn to outsiders to free their sacred burial grounds from humanoids. Uh huh.

The map is linear. It’s also missing things. At least two rooms in the dungeon are missing: 11 & 15. 11 has the guards for the treasure room and it’s not obvious at all where it should be. Likewise 15; no clue where it should go. Rooms one through five are also missing from the map. Those are above-ground though so I thought maybe they were missing on purpose … at first. But the text makes it seems like there should be a map. It can’t be that there is just a page missing: the missing dungeon rooms have no where to be placed and there’s no rooms ‘missing’ numbers where they could go. The adventure is probably still serviceable; it’s nowhere near as bad a fuck-up as the Hollow Mountain adventure from Frog God.

The adventure states several times that a frontal assault is a bad idea but it then goes ahead and numbers the encounters from the front. Strange. The 26 or so rooms (plus or minus the missing ones) are stuffed full of bugbears. All of the bugbears will sound an alarm when intruders are found, so it’s going to turn in to an all-out mass combat pretty quickly. The rooms are all pretty boring with a single exception. They generally are either empty or have bugbears in it that raise an alarm. There’s a hidden door now and again but nothing unusual and the hidden doors/secret are just to little cubbies that contain treasure. The single exception is the rear entrance. You have to crawl up the latrine holes (with the required Otyugh underneath) in order to get in to the main lair. You come up in the latrine in plain view of about 25 bugbears. Ouch! Talk about a one/two back door entrance punch! The players are gonna get a real fisting!

No new monsters and while there’s lots of magic items it’s all pretty much book items. One exception is an intelligent spear with unusual abilities. That’s pretty much the only thing in the module that feels special and interesting. I wish the other magic items were more exciting, they just come across as throw-away magic items. Same with the mundane treasure. “4 gems worth 1500 gp” is the usual fare with a single “platinum & gold bracelet” serving as an example of the best the module has to offer.

1 Response to WGH3 – Into the Howling Hills