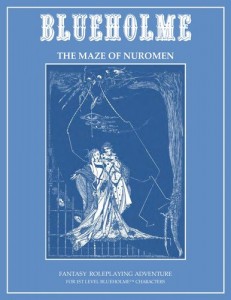 This is an introductory adventure for 1st level characters through a two level dungeon with many classic elements. The room descriptions wear at times and it’s a bit vanilla. Still, it’s better than most of the products released. As an introductory dungeon crawl it does a decent job and would be great for complete n00b players because of the relatable experiences. It could use a healthy dose of a little more exotic fare sprinkled in.

Over a page of background we learn of the wizard Nuroman and his wicked way, how he built his tower and and the evil town that supported it, and how it was all destroyed in a flash because of of Nuromans tampering with things best left alone. Pretty standard fare combined with the standard “elves leaving the world” and “goblins filling in” trope. Once upon a time in a hole in the ground there lived someone who thought this was fresh. But … it IS accessible. The elves leaving the world and the dark things filling in is something that almost anyone new to RPG’s would recognize. It grounds them in something they can recognize in order to then introduce them to stranger things. This is something that will repeated over and over again in this adventure … except the strange things never appear. The first encounter, in the wilderness, is another good example. The group meets a band of high elves on their way to leave the world. They tell the group of an elf prince killed in the maze, his crown lost, and how the elves would dearly like to see the crown retrieved. They give the party a token to allow them pass any elven guards present in the wilderness near the ruins, and retrieving the crown makes the party elf-friends. ABSURDLY classic. Nearly the platonic ideal, from the token of passage to the elf-friend tagline. And COMPLETELY accessible to someone who’s only knowledge of fantasy comes from the Lord of the Rings movies. It’s impact is heightened even more by the art and language used.

I don’t usually comment on the art and language in an product. It has to be exceptional, one way or another, for me to notice. I noticed it in this. The art is Harry Clarke and the language … i don’t know … airy, or unusually worded maybe? Maybe some slightly archaic sentence structure? The art and language marry well to the content of the introduction and give an immediate strong feeling to the DM. These are the sad elves of epics. I’m pretty sure Clarke, or an imitator, was used in Polaris and I seem to have transferred a great deal of that games feel to the introduction and this first wilderness encounter. I can’t remember if the Rankin-Bass LOTR had a scene with the hobbits seeing the elves on the journey home, in the forest. I confuse the introduction of The Hobbit, Fellowship, the books, the movies, and the cartoons … but IF you saw the passage of the elves in the forest in the RB style then you’d a further look in to the vibe present. It’s some strong imagery and should give the DM a lot to go on. And it pretty much never reaches this high again.

The dungeon maps contain some interesting elements but are essentially just some simply branching deigns with a couple of small self-contained loops. There are some fireplaces, same-level stairs, pools, and so on that appear and those are all nice elements that add variety to a map. There’s just only so much you can do with maps this small. Maybe fourteen keyed rooms on the first level and ten or eleven more on the second, with a few empty rooms thrown in also. There’s a decent attempt at mixing things up a bit: exits through chimneys, waterfalls to the second level, a blocked off section and so forth. That good; far too many dungeons are just two-dimensional affairs, but I want more More MORE! More complexity! The wandering monsters are a real disappointment. It’s just a pretty standard list. No words of explanation, no flavor text, just a list. This is a failing for a product that’s targeted as an introductory adventure. You want an impactful first adventure that the group will never forget, not a meat-grinder of flavorless encounters.

The encounters generally contain a classic element. A bottomless pit that stirge fly out of. A rushing underground river that can pull a character under and sweep them away. Skeletons sitting at table that animate when their gambling stakes are disturbed. A skeletal arm with a sword that animates. A giant centipede in a rotting carcass hanging in the kitchens. Statues that open secret doors when their are turned the correct direction. ‘Ghosts’ that appear and do strange things, dispelled by the characters actions. A secret door behind a bookcase. Magic mouths. The list goes on and on. The encounters are all extremely relatable to someone with no fantasy RPG experiences. Players like to recognize things. They like to feel like they have figured something out. There are a couple of Save or Die traps, which seems a little harsh in a first level dungeon. The keyed encounters are a bit wordy. They do a decent job of providing a certain vibe but it seems like they could be shorter and still retain their flavor. There is a LOT of text about rusty weapons and skeletons laying on the floor where they died.

The monsters are nothing special. Really just classic encounters: a zombie in an iron maiden. A hollow-voiced wraith and so on. The mundane treasure isn’t very interest either: a jeweled ring and that sort of thing. I like my monsters a little more non-standard and I like my treasure VERY descriptive, to the point that the players want to keep the ring for their characters. There’s not much of that here. The magical items are a mixed bag. There’s a fair amount of boring old book items, like a +1 dagger or a potion of flying. I’d prefer a jar of glowing flies that you swallow in order to fly. There’s a non-standard item or two but they feel more like ‘tricks’, the notable example is the elven crown in the introduction that provides a one-time bump to Charisma.

2 Responses to The Maze of Nuromen