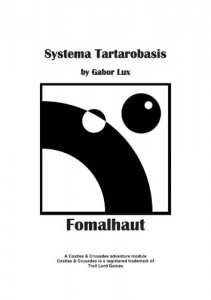 The adventure puts characters in unfamiliar environments and situations as they move deeper into the ruins of technologically advanced subsurface cities.

This is a crazy awesome setting/adventure from one of the best in the OSR, Melan. The players are transported to a strange Orwellian post-apoc cityscape where they must attempt to negotiate the thugs who run the place in order to find their way back home again. It has a strong technology element to it, or perhaps “fallen technology” would be a better description. It’s strong product with a heavy heavy open-ended adventure which could use more organization/layout.

People complain too much. For all the asshattery that the Internet brings it also exposes us to new ideas and things that we would not otherwise ever see. Gabor Lux/Melan is one of those things. He’s very very good at creating interesting ideas and this adventure is no exception. The players are transported to some kind of ruined undercity full of Moorlocks, except the Moorlocks are real people. You get the idea though. They are alone, in the dark, in a strange environment, most of their gear is gone, and contact with deities and refreshing magic are both not available. Trapped in a strange Orwellian city the group must get out. Or rather, they must first make it out of the complex they are in, then out of the wasteland and in to the commoners quarters, and then in to the main city, and then in to the grand techno-temple that contains a teleports to get them home again.

Quote a bit of the adventure is spent detailing the people and culture of the undercity and the social environment in which the adventure takes place. This adventure is, at its heart, a city adventure, and those revolve around the social interaction of the players and the people around them. The designer does a great job of laying out the Orwellian environment they find themselves in. It’s a bit like one of those Fascist episodes of Sliders. The group KIND of looks like regular citizens, but they can give themselves away easily and they are always being hunted by the government. Because they are outsiders AND because the government keeps a stranglehold on its citizenry. The designer lays this out quickly and briefly in only a few pages but does an EXCELLENT job of building up a picture of a paranoid fascist government that controls the people through fear, religion and force. Really excellent work. Many of the named NPC’s have agendas of their own, or at least have room for them or ones that are implicit, and this makes for excellent role-playing as the party try and orient themselves and find a way out. (“Oh No! The slider device is broken!”)

Most of the adventure describes general locations within the city. The outlands, the commoners quarters, and the upper city. These are laid out in broad strokes and clearly require quite a bit of DM improvisation in play. There’s generally more than enough detail to run the adventure in these sections and I didn’t really feel like things were missing. Several important buildings have their interiors mapped and keyed out, as does the initial ruin location the party arrives at. This first section, while not too terribly exciting, does serve to introduce the players to this new environment. Disney does something like this on their rides; the queue area is themed to get you in the mood before you end up on the actual ride. I assume this is the purpose of the ‘transport location ruin’ in this adventure. The net effect is something sort of like Vault of Drow. An environment that is minimally described with both more color, in the form of the culture and social interactions, and less because of the human-centric focus and the lack of the bizarro wandering tables from Vault. The treasure is lacking, consisting mostly of lazer pistols and little else in the form of wealth for the party, while the creatures are almost entirely just low-level fighter classes with a robot or two thrown in, as well as the terrible Ash-Men. I assume the treasure thing is some sort of Castles & Crusades thing and cash isn’t used in that system to advance?

The whole thing could use a few more section headings. It has some hand-drawn maps with numbers on it and then the numbers are expanded on in the keyed descriptions but the numbers don’t themselves have a heading. You have to read the text to find out what he location is, making is very difficult to scan during play to find a certain type of location. Just numbers may be fine in a dungeon crawl but in an open-world design you need to be able to quickly find something. “We’re looking for a brothel; is there one around here?” Uh …. let me quickly scan 12 pages of text guys … It’s nothing a printout and highlighter won’t solve, but annoying.

This is a very richly described environment and I encourage you check it out. It’s free and it’s author is probably the best designer currently active in the OSR.