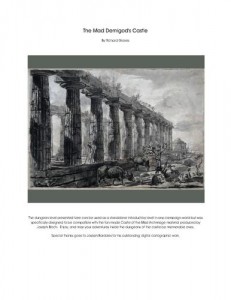 I’m probably soft-balling this one. Fuck off. I like big dungeons.

This is an introductory level to Castle of the Mad Archmage. Both of these products, I believe, are meant to emulate the experience of adventuring in the original Castle Greyhawk. Castle Greyhawk, of course, has never really seem the light of day so these products and some forty year old memories are the only thing we have to get a feel for what one of the original megadungeons was like. There’s no introduction and no background beyond the couple of sentences that convey what I just described. It launches right in to the dungeon.

This particular level has 122 keyed encounters on the map. A really, really nice map. It’s complex. It has multiple exits off of it to a variety of different levels. I’m a SUCKER for a well you can climb down. I LOVE classic elements and this has a well the players can climb down. Yeah! There are lots and lots of rooms and hallways and alternate routes weird room arrangements. This allows for the players to avoid encounters, get ambushed from behind and maneuver to get around other encounters. It fills four pages and, while cramped, doesn’t quite feel like a random map or a ‘hallways for the sake of hallways’ map that the famous ‘over the shoulder’ Gygax map seemed to indicate was the norm. It doesn’t have much in the way of unusual features, which is disappointing. Ledges, slopes, same-level stairs, chasms, etc are all missing, as are any secret doors. Those would have turned this in a stellar map. The wandering monsters are a bit random and ordinary. Skeletons, zombies, goblins, kobolds, and lots of vermin. Just a complete random assortment of level 1 monsters. I usually don’t like that, and I don’t like that here. My theory is that I’m paying for the designers imagination and copying a wandering monster table from the DMG isn’t an exemplary piece of imaginative work. It’s all book standard. I get that this is a minimally keyed dungeon, probably using the tables in the 1E DMG (I don’t know that for sure, but it seems like a good guess), and I’m now complaining that it does it well. If it’s actually performance art disguising itself as a dungeon then it should be up front about that. Otherwise people might get confused and think this is ‘correct.’ Let me be clear: it’s not.

The encounters are … well, I don’t know. Random, maybe? It looks like a completely random assortment of encounters that just thrown together, one per room, with some kind of random room contents generator thrown in for good measure. This results in a situation where the various rooms feel more like a wilderness hex crawl type of thing than a themed dungeon level. Each room feels like it’s own little environment completely disconnected from everything else around it. Mad Props for seeing that style through to the end and coming up 122 different rooms for people to adventure in. It is, however, probably a bit too random to sustain anything other than ‘Tower of Gygax’ type of play. They are imaginative enough, I guess, but they don’t really make any sense.The first dungeon room is of a statue/pool of frolicking girls. Drinking the water will cause uncontrollable laughing for 1d6 round. The water has a tarnished silver spoon in it. This is a good example of all of the other rooms. No rythm or reason as to why there’s a silver spoon there. No real reason for the laughing, other than the statues are laughing. It just IS. Room three is another good example. A wooden table and stool. On the table is a box with 89 nails. There’s a leather backpack with a dead mouse an an empty potions bottle in it that is under some wooden debris on the west wall. Like I said, it looks completely randomly generated with maybe a little DM power to put it together. “Eight Gobilns armed with clubs can be found here.” is a good example of a monster room. It’s not quite a minimal key but is close to it. And you know what? It’s at LEAST four times more interesting than Dwimmermount. Seriously, I know its rather gauche to do, but while reading this I kept coming back again and again to my thoughts about Dwimmermount. That dungeon tried to present itself as a unified whole with some reasoning behind it. And it failed miserably in its ‘expansive minimalist’ key that focused on boring details. This dungeon embraces that sentiment SO much that it ends up being interesting. It’s like a completely random assortment of stuff and that should be obvious to any group of players going through it. No wasting time trying to figure out what is going on … nothing is! In that sense it’s more out there than anything in ASE or WMLP. Grand over-arching theme with subtle plots and history intermixed? Norfolk & Way pal! This is just some random shit we threw together and spent 30 seconds per room cleaning up a bit.

I’m absolutely serious about his being used as a kind of hex crawl tool. I tend to plunder those products for cool ideas that I can then insert in to my game, either on the fly or as some kind of planned thing going on in the background. You could totally use this product the same way. A DM could flip to a page and pick almost any room and insert it in to a dungeon or get inspiration from it and build sections of their own dungeon from it. A kind of cure for writers bloch. (Get it?!?! Get it?!?! BLOCH!!! Get it?!?! Oh man … I’m the best guy I know!) You could take that “laughing ladies” statues/pool and build a section of your own dungeon it so that it made sense in context. Seem from that viewpoint then this is one of the strongest products ever produced in that genre (Dungeon seeds?) As an actual dungeon to play … well, you’d have to have the right group in the right frame of mind. If your players don’t need meaning and are willing to tackle rooms one thing at a time without a larger context then this is great.

2 Responses to The Mad Demigod’s Castle