SM4 – Beneath the Darkshroud Peaks 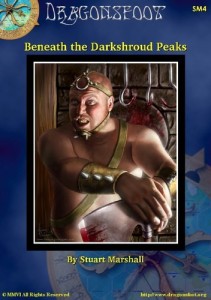 The player characters hear rumours of a barrow to the north that is supposed to house an evil mage and his minions! The players will certainly find great riches and danger in the dungeons beneath the barrow. Shortly after hearing of the barrow, a trusted person offers to give them (or sell them for some reasonable price) a map to the area where it can be found. The hunt is on!

This is a dungeon crawl through some crypts full of undead that is also being used a lair for goblins and a base for an evil wizard. There are massive numbers of enemies in the complex. While there are a few goodies to be found it mostly a slight above average crawl with an unusual map. It’s an unusual module and, since it’s free, I’d suggest taking a look at it just to get a sense of how different it is.

The Start for this adventure is a bit strange. In the last several adventures in the series it’s been stated that one of the townspeople is a penanggalan. That’s never really explored very much, but this adventure assumes that she’s run off from town and has been causing trouble. The abrupt start is that a local farmer has located her new lair. The lair and her defeat is glossed over in a sentence. The focus is on a set of papers the group finds which indicates she’s been directed by an evil MU in some barrows nearby and that he’s planning in attacking the town. The party needs to raid the barrow and slay the wizard in order to save the town. I mean, assuming you want to save the town. The core discovery is nice, if a little abrupt, although I’ve never been happy with “Be A Hero” hooks. The only other notable thing about the introduction is the inclusion of a 0-level mercenary troop available to hire. The parties gonna need it.

The maps are … strange. The first level has two small complexes with goblins connected by the barrow entrance. There’s not much exploration here; really just a collection of rooms … something like a central room with a couple of rooms hanging off of it and maybe a corridor or two with more rooms off of it. There might be a dozen or so rooms in each of the two goblins lairs. The barrow is completely linear and has about seven rooms in it. Level two has multiple sublevels not connected, and level three has a couple of distinct parts and includes a stair back up to a disconnected level two portion with a balcony overlooking it. This isn’t Dark Tower or Thracia sublevels though. It’s really just a mostly linear complex with sections that are symmetrical. It’s a really strange map. It looks interesting, but I don’t think it actually provides a good environment to explore; it’s not complex enough. But props for doing something different.

The map key is also a bit unusual. Each section starts with something like “there are 80 goblins in this section of the dungeon” along with a brief description of the various bands =, weapons, armors, and a check box for each goblin. Each room in that dungeon section then says something like: “there’s a 75% chance of 2d6 goblins being in this room” and so on. One of the rooms will say “all of the rest of the goblins are to be encountered in this room.” It’s kind of an interesting way to present the creatures. There’s also a nice little section on what the goblins will do under certain circumstances, like retreat, flight, infiltration, morale break, rear attack, etc. That’s pretty cool and something I like to see that helps me run the encounters. The actual room descriptions are pretty standard, and thus boring. This is an interesting way to present the entrance to a wizard/leaders lair. The party has to make it through his minions before getting close to the wizard. The barrow is presented in exactly the same way: there are seventeen ghouls max to be encountered. The barrow is slightly more interesting. Most of the rooms have something going on to investigate. I like this kind of variety. Jars full of goo with goodies at the bottom. Spiders in cubbyholes. A “bad dreams” curse that lengthens the time grave robbers have to rest to recover spells, and nooks and crannies with more goodies in them. The room descriptions are a bit on the long side, but you do get a nice “what the ghouls do if turned” section. Uh … run the other way down the corridor? It’s a straight line.

Level two continues the “lots of creatures with a % chance in each room” method. Quite a few of the entires are just “50% chance of 1d6 nightcreepers” Not exactly inspiring. This entire section though is meant to be a creepy kind of “Pitch Black” environment with the darkness closing in and sounds in the night. Following that level is a set of rooms with the hallways full of statues with magic mouths that scream, zombies, and japanese ghost-like kiddy-wraith (literally.) The last level has the MU’s gnoll guards and a hatchery and then back up stairs to his main lair and more gnolls. The entire dungeon feels more like a funhouse that you are advancing through than a dungeon you are exploring. I’m pretty sure it’s supposed to be that way but it feels too checkpointy … too much linearity and things around for no particular reason. It feels a lot like an assault. Then again, it IS an assault. That’s a different kind of adventure than many players will be familiar with or is presented in many modules.