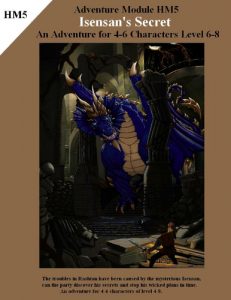 The troubles in Rashtan have been caused by the mysterious Isensan, can the party discover his secrets and stop his wicked plans in time?

This is an adventure with two small dungeon crawls and a short wilderness adventures to get there. As the cover indicates, the finale is with a blue dragon. It handles the dragon in a somewhat intelligent manner (lots of minions serving him) and does a decent job with magical and mundane treasure. It ends up feeling a bit bland though, with not enough non-guard encounters.

The village is not covered at all this time around. Instead it’s been spawned off in to its own product, which is probably the right thing to do given its featured role in … five modules now? ANyway, our party of 6th-8th level adventurers are offered 2000gp to bring in a bandit leader, dead or alive. There’s a small bump for each pair of bugbear or hobgoblin ears brought back. The ear bounty is GREAT. I like that kind of color. I think I’m gonna steal it for tonight but have some evil demi-humans convince the humanoids to cut off their ears and go halfsies on the bounty. But at 6th-8th level? I think not. Probably better to just announce that the bandit leader is a dragon and rely on the parties greed to show through. There’s an 8-day wilderness adventure to get to the first dungeon, the one the group cleared out in the .. second module? The wilderness wandering monster tables are just simple things that could have come straight out of the 1E DMG.

The first dungeon is a small thirteen room affair with a simple branching design. It’s the same dungeon used in (HM2?) and is an example of a dungeon being repopulated. The rooms are full of skeletons of the creatures the party killed the first time around, as well as a series of new things that have moved in. Carrion Crawlers, Yellow Mold, Green Slime. There’s a small encounter with a group of bugbears, 14, that leads to the ‘clue’ the players are supposed to discover: a captured mage. He’s actually the leader of the bugbears but ties himself up when he hears the party killing them. The bugbears are so afraid of him that they won’t blab if captured. That sounds a little far-fetched. His only reason for being there is to clue the party in to the location of the dragons lair and pretend to be their friend so he can backstab them in his lair. DEEP in his lair. After the group has probably slaughtered about a bazillion of the dragons minions. It’s a pretty long stretch to get to that point, but whatever.

The Dragons Lair is another small 22 room branching design. There’s no Daphne in sight though. The design is so simple that you only need have one encounter before taking on the dragon. Just a simple branching design in some caves. The vast majority of the rooms just have guards in them: 34 gnolls, 8 trolls, 22 bugbears, 19 bugbears, etc. As I said before, the idea of the dragon having minions to do his bidding and help guard his lair is a good one. It’s just very poorly implemented here. The monsters don’t really react in an organized fashion. The module implies that they do, when guard horns are blown, but it’s organized in a poor fashion for a DM to coordinate the response. Each room lists who they respond to. This is cumbersome. It would have been better if the room in which the horn was blown listed which rooms responded. That sort of Order Of Battle helps make things run faster. Then again, it’s nothing that a read-through and pencil notes couldn’t solve.

Theres a decent encounter with some Abolteth that are co-lairing in one of the branches. They have some of the dragons minions as slaves, and are doing the whole illusion thing also. It’s a pretty standard Aboleth encounter, but it’s still nice to see. Other than that … Guard room with 22 bugbears. Guard room with 8 trolls. Etc.

Some of the magic items are nice though. That’s not too surprising since the guy write ‘The Tome of Minor Magic Items.’ A bow that can give you a little strength bonus. A ring of comprehend languages. Elven leather made out of leaves. They could use a little more description but the effects are certainly not book standard. There’s a whole series of staffs that are pretty lame. Essentially they allow the wielder to cast a single mega spell, like Ice Storm of or something similar. The dragons shaman guards, in his lair, are wielding a pair. IE: They each have a single one-shot hard hitting spell. I never understood this. Why not just say “He can cast ice storm once a day” instead of gimping the party with a single-use magic item.