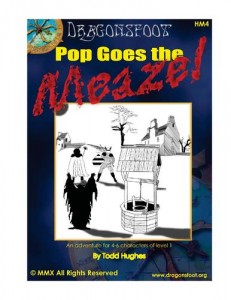 A thief is loose in the town of Rashtan, can you stop them?

This is a small & short mystery/hunt in a small flavorless village. Hear a rumor, get a mission to find out what’s going on, conduct interviews, explore a small cave complex with rats and centipedes. IE: Clean out the windows attic.

Other adventures by this author include “The Goodly King is Actually an Evil Doppleganger” and “The Green Devil Face is a Sphere of Annihilation.” The cover picture and the title pretty much give away the entire adventure. Wally the farmer has gone missing. People are complaining about small valuables getting stolen. Someone else disappeared a few weeks back. The sheriff is offering a reward, cause spending the towns money is easier than doing his job. Clues are given at six of the 23 locations in town. None of the locations are described other than name and maybe a sentence or two in the clue. IE: The dive bar is run by Boris “one-ear”, a surely man who doesn’t like people snooping around his customers. I’ve been giving this series a lot of shit but it’s been getting better. The descriptions for the various clues are great at times. A dive bar run by a Surly/private Boris ‘one-ear’ is pretty much the exact level of detail I need to run a place. It’s short and it’s got some good imagery I can expand on myself during play. The other clue locations are similar. The city hall has a janitor that you can get a clue from. If I ignore the RenFaire 2E bullshit in the last statement then that’s ok also. As is the tavern owner who thinks the other tavern guy is behind things. Oh, and the guy is the head of the thieves guild and is worried that the thefts at his place will draw attention to his activities. He hires a guy to join up with the party as a hireling to spy on the group and feed information back to him about the thefts. Nothing nefarious, just report back. That’s a pretty good inn description without ever describing what was in the inn! The rest are not so good.

The dungeon/caves has five rooms and is located under the well in town. There are giant rats. There is a giant frog. There are giant centipedes. There is an Osquip. And there’s the 4HD Meazel. That’s a lot of nasties located in the center of the village! The cave system is described as having TONS of rats, which is a nice little bit, especially for use in the cramped hands & knees tunnel crawling part of the adventure. Should do a great job of freaking the players out. Each entry has read-aloud, which is a waster of time and space. Those sections add nothing to the locations. Not that the DM sections add anything either. The rooms down here have nothing interesting to offer.

The monsters are book monsters and boring, bringing none of the mystery or excitement a D&D game should have. The same for the treasure: a small number of coins, some gems, and a +1 dagger and golden Ring of Water Walking. The dagger is a serious disappointment. I wish more had been done to make it stand out. The ring is slightly better since I like these sorts of minor magical items. I think I fell in love with items of that sort when reading Bree & the Barrowdowns back in high school when it first came out. Maybe because they don’ SEEM like book items? The barrow treasure certainly wasn’t book, at least not the combs that kept tangles out of your hair. The +30 armor is a different story. 🙂

This is clearly supposed to be an introductory D&D adventure. In my mind your first adventure should be full of mystery and wonder, whimsy and The Fantastic. It should make you feel like you did the first time you ever met a monster in a D&D game or wondered what something was or what it did. “Dagger, +1” is just going through the motions of playing D&D.