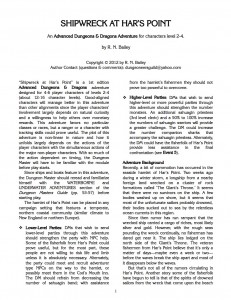 A few weeks ago a ship was wrecked off the hamlet of Har’s Point. Rumours abound that the ships was carrying wealth, and the unhappy spirits of the dead sailors walk the nearby beaches.

This short adventure reminds me more of a Harn adventure than D&D. It has monsters in it to slay, unlike Harn, but it focuses on setting an environment in which an adventure takes place rather than just providing a set of keyed encounters. The adventure has a generic feel to it but the designer is in the right state.

There’s been a shipwreck off the coast of Har’s Point and the locales are abuzz with rumors of the treasure they think it contained. This draws the Murder Hobos in and they soon learn that some folk have seen the dead sailors walking on the beach at night, burying their treasure. The group will poke around the village, beach, and wreck long enough that some Sahuagin will show and it’s likely they’ll be contacted for help by a Selkie. There is a nice little section at the end suggesting various consequences as a result of the players actions. It’s pretty good and most of what the players do will ultimately just solve the short-term problem and eventually lead to the destruction of the village. I don’t mean to suggest that this is a rail-road at all, but rather the side-effects of Murder Hobos: they fix a symptom and don’t cure the illness, in general.

What the adventure provides is a bare bones description of a cliffside fishing village. A small map of the village, very brief descriptions of the mayor, general store, church, and tavern. This all takes up about a page, if the map is ignored, and is completely generic. The most interesting part is that the mayor is a fisherman, works six days a week, and hangs out in the tavern on the seventh to do his mayor’ing. A short timeline is provided to help with action taking over over the few days the group will be in the village. This isn’t a railroad set of events but rather it describes what the Sahuagin will be doing during their evening activities. The bad guys are out searching for something they lost so they spend a lot of time wandering around and searching at night. Sometimes they run in to villagers. The events have a number of disappearances and culminate with a full on assault on the village as the Sahuagins desperation finally wins out. The event list is very nice and plays well of the coastal region, as does the 12-entry rumors list.

The rest of the adventure is a description of the areas in and around the village. The looks like a typical encounters key but in reality it is describing each area much more like, say, a regional setting would. The shipwreck area is described. The wreck is described. How to get on to it, how to not fall out, what the players find, what happens if they fall in the water, what’s different at night vs. the day. Chances that the Sahuagin will be there when the party is, and so on. The total effect of the five or 6 locations described this way is that you get a decent region that you can run in a very free-from manner; very nonlinear. I very much like having the adventure laid out this way. It gives me the ability to run the adventure on-the-fly, rolling with the punches the party throws at me. I can improvise what’s going on and deduce what should happen and fill in the extras. It’s a good way to lay things out and is what I’m referring to when I talk about it being Harn-like.

Of course the content is almost all completely generic and uninteresting. Sahuagun near a coast village. They have sharks. They attack people. And eat them. Woah! That’s new! Usually the fish-men are just described as being depraved and evil but nothing more is said. In this module they are all about eating people. They eat fellow Sahuagin. They eat villagers. I’m sure they would eat the Selkie if they could. That extra little bit of flavor text stands out and helps bring the Sahuagin to life. Nice. There’s also a nice little encounter on the beach with a couple of fishermen/beach bums looking for treasure. They are wary of party, since they want the treasure for themselves, but may eventually warm up. The whole thing does a good job of painting these two guys, though rather broadly, and again gives me enough to build them up and add to the encounter.

The sites descriptions do suffer from the problem of being overly long. There’s a lot of detail in each one. Mini-rules for getting a boat close to the ship, for experienced and non-experiences sailors. Mini-rules for getting from the groups boat to the rock/reef the ship is run-around on. Mini-rules for getting from the rock to the ship. Mini-rules for falling of the ship. Mini-rules for what happens if you fall in the water. Mini-rules for the appearance of Sahuagin on the ship. Rolls for finding hidden objects in the wreck. It adds up quickly and turns in to just a mass of text. The encounters are also pretty tough. 15 2HD Sahuagin, 2 5HD sharks, a 5HD giant eel … all while suffering through the water environment and the penalties it imposes. 2nd level characters are dead men swimming. The magic items and mundane treasures are nothing special. +1 ring of protections, +2 daggers, oil of sharpness (actually, I like that book item …) and small gemstones/pearls/coral worth money. The one exception is the item the Sahuagin are looking for, the Crown of the Briny Deep, and it can only be used by Sahuagin. Phooey! The magic & mundane treasure needs to be spiced up so the players will actually get excited about them and want to keep/use them.