TBG-1 The Manse on Murder Hill 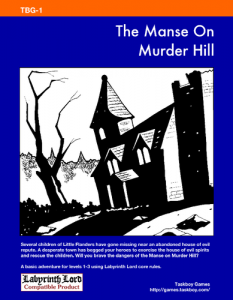 Several children of Little Flanders have gone missing near an abandoned house of evil repute. A desperate town has begged your heroes to exorcise the house of evil spirits and rescue the children. Will you brave the dangers of the Manse on Murder Hill?

I reviewed and provided some comments on an early draft of this, as a $0 cost favor, so be warned. I’m sure I commented on several things but all I can remember now is a bit of backstory.

This is an exploration of a “Haunted House” which is haunted in much the same way that Saltmarch was haunted. The party is recruited to go find some children that have disappeared in to a haunted house. The local villagers would but, well, the kids fathers formed an impromptu mob and charged in … only to be found hacked to bits the next morning and hanging from the massive old tree out front. So, yeah … not a place for villagers to tread. [The early draft had the villagers waiting passively for the adventurers to go get their kids, which I commented was unrealistic. The villagers would form a mob and go get them. Clearly, the designer took this to heart and sorted it out with a nice tidy massacre of the mob taking place in the background. Pretty sweet. It also gives the party a bit of foreshadowing: something in that house kills shit and they could be next. I find that sort of thing is always good for getting the party on edge and I was happy to see it. Anyway, the sheriff knows he’s in over his head and asks the murder hobos to go get the kids. The party is going to go in to the house, meet the haunters, maybe save the kids, and then face a nasty twist at the end.

There’s a nice, and long, rumor table, and a decent number of local villagers detailed. This comes to about four “businesses” and a few local families. The families are the ones whose children have disappeared … and whose husbands are now dead. Uh … it’s actually a little depressing to read about how the widows and orphans are fairing … AND THAT’S AWESOME! The whole village is about 2.5 pages and a page of that is the AWESOME rumor table.

The house has two stories and a basement. The downstairs is all boarded up and the only entrance is up a rickety stair to the second story. The house has two wings and a central section, with about 14 room on the second floor and about 16 or so more on the first, with seven or so in the basement. The second floor is pretty linear, with it’s two wings, and the first is more of a “shotgun shack” with doors off the hallways. The basement is almost a maze of doors and hallways. These are not exactly amazing maps but it does allow for a bit of variety. A 2-story foyer, a balcony, and so on.

There are about seven encounters to the page, so there’s a decent amount of details in the two-column layout. The second is more of an exploration/spooky house adventure. Right outside the front door is a skeleton pinned against the door by an arrow. The place has some illusions scattered around by the inhabitants but they are very well done. None of this is blatant but (mostly) pretty subtle. Furtive shadows. Footsteps behind the party. Low moaning and heavy breathing. Walls full of mildew and the corners of rooms with cobwebs. Dark pools of blood coming out from under doors or small repellent idols. The encounters are well done but the upper floor seems a bit slow. It’s a build-up, with mostly a few vermin in the rooms. This build up is tad spoiled by the existence of kobolds on the wandering monster table.

The second level is going to turn in to a pitched or running battle with the humanoid bandits are some point, and an order of battle is presented for when that happens. I find these useful for when things degenerate in to the monsters running for the help and the party is yelling and screaming and pulling agro on everything in a 20 minute radius. The rooms on the first floor continue to have a decent amount of flavor without an overabundance of description. I prefer things this way; it gives me enough to work with but it’s still short enough that I can pick out the information I need to run the room. The whole thing has a really good social set up, with the leaders of the humanoids having some good, but short, write-ups and little details. One example: one of the kids was being a pain and wouldn’t stop taunting the bandits so they shoved her in to the “bad” part of the basement. This story is related by the other children, and the party has probably learned from the families in town that the child in question is a pain in the ass. Instilling a little sympathy for the monsters is nice. 🙂 Kids saved (or killed by the humanoid bandits) then the party can return to town.

But Wait! There’s more! That’s right, a real act 3! The party has been finding signs all over the place that the house was once used as a cult headquarters. It turns out that they were sacrificing people to bring back their demon lord. Guess what! The party ended up killing enough of the bandits that the demon lord can now reappear! The house goes in to full on Poltergeist mode complete with the disembodied demon demanding that the party bring him a child in one of the Summoning Circle rooms. Either they do it and the demon lord shows up or they destroy the circles (or go get help from the monks in town in doing so.) Either way, having an act 3 is nice. Escape from the Dungeon is usually glossed over and it’s nice to see that here. There’s also a short bit at he end about what the villagers do in the various scenarios (all kids saved, some died, all dies, etc.) The townspeople laud the characters is they save all the kids. More adventures should do things like that, especially for murder hobos.

This is a solid little adventure. I’m not a real fan of Haunted House modules, but this one if flavorful enough, and certainly better than Saltmarsh. The act 3 portion, combined with the social elements and the decent, and shot, backstory, adds a lot to the setting and really makes the village and setting come alive. I prefer my bandits to be human, and I don’t really see a reason for them to be humanoid in this module. Human bandits force the moral issue (resolution: just kill them anyway) and better offset monstrous things when they do appear. Like a demon.

1 Response to TBG-1 The Manse on Murder Hill