DF29 – Ruins of the White Watch 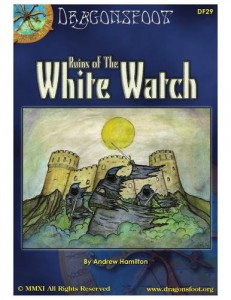 Centuries ago the White Watch defended the land. Then it fell and it’s location was lost… until now. Who knows what treasures could be found in its depths.

This is the exploration os a small ruined keep. The default hook has the characters recruited by a mage who wants them to go recover magical scrolls, books, etc. He’ll let the party have everything but in return he want to examine all of the magical lore. This is not my favorite type of hook however it can be made to work. I find that replacing the words “adventurers” with “mercenaries” helps me get in to the right mood with these types of things. The wizard is a goody goody type and wants to geas neutral and chaotic parties and won’t deal at all with evil parties. Oh, and he’s 18th level so no fucking with him. This is SUCH a major turn-off for me to see in modules. Why not just make him a greedy asshole wizard who obviously shoots meteor swarms out of his butt? I really dislike seeing this kind of stuff stat’d up with all sort of logical reasons provided for why X does Y and is a good-goody and ensures his needs are met by Z … and here’s the stat block with his Medallion of Mind Masking to go with it. Oh Well … at least it can be fixed easily enough, even if FAR too much space is wasted on the introduction, read-aloud, and the like. The read-aloud alone is fully a page long with a lot of setting-specific information. None of the setting-stuff is a deal breaker, it just the standard “once mighty empire now ruined and everyone has forgotten” stuff and has no impact on the adventure. Which begs the question: why include it, or the painfully long read-aloud?

Theoretically there’s a wilderness adventure to get to the ruins, but the map and encounters really stink. The map shows one area a bit to the south of the ruins but doesn’t show it’s relationship to the nearest settlements, etc. Where’s the start? Who Knows! The Bramble Run is detailed quite a bit. It takes up one teeny tiny portion of the map. The Ash Wood is detailed quite a bit, but it runs off the southern border of the map page so there’s no telling how/where the party enters the forest. The hill area where the ruins are are not detailed at all. The wandering monster tables don’t have a frequency and are quite boring. Songbird. Game. A wereboar. A brown bear. That sort of thing. I like to see animals and the like but I would have liked to have seen a bit more detail on the encounters. WHat are they doing? Why are they there? It’s not that they are bad, and they do in fact do a decent job of giving a flavor, but there’s just nothing to them. Lest the party get bored there are, however, four preprogrammed encounters in the wilderness. No locations given, just whenever the DM wants to use them. Bad Designer! No cookie for you! Forcing players in to encounters sucks majorly and shouldn’t happen. You want to write events then go write a stage play. Now that I’ve ranted about them … they are also not bad for what they are. Two of these are essentially environmental: ticks and a thunderstorm. Both are pretty decent examples of providing environmental encounters to the party, although both do have a bit of “punish the non-OCD characters.” No gaiters? Ticks! Got food and dry tents to wait out the thunderstorm? I hope so! Did you bring a pot to piss in, or at least one to cook in? No hot gruel for you!

There is one combat encounter here that is indicative of most of the rest of the module. The party encounters 14 were-wolves. They use hit and run tactics, take out mounts to delay the party, and so on. IE: they are smart and there are a lot of them. This sort of thing will show up over and over again in the module. Large number of opponents will encounter the party. They will use good tactics, outlined in the encounter. They fight smart, withdraw when things go badly, and set up ambushes. They attack at inopportune times, such as when the party has encountered a trap … that the creatures have set. They fight with spears to get at back ranks and keep their distance. They do swooping raking attacks form the skies. They attack while the party is in the middle of another combat. And there are A LOT of them. Large pitched battles could be a routine occurrence. That’s some pretty bad ass stuff and reminds me a lot of some of the human-centric I-series modules from Troll Lords. Oh, and they generally have a LOT of HD, making the fights even tougher.

The rest of the module is … not so good. The ruins are just watch-post so they are not too complex. Nine or so locations in the fortifications with maybe three of them expanding in to small and simple maps to explore. Not too much exciting there, although probably realistic. I prefer fun over realism. I can appreciate that it’s realistic, and challenging, but I want the players to enjoy themselves and realism can be a deterrent to that. There needs to be enough to buy in but not so much that a player feels they are gonna get screwed over for not bringing 99.5% pure salt to deal with the leeches. (That’s not en example from this module.)

The the locations can provide for some decent combats, especially with the intelligent opponents and they listed tactics, the rooms otherwise are devoid of interesting things. Not much to interact with and not many interesting features. Again, realism to the detriment of fun. I don’t really care about what a room was once used for, or yet another description of old dusty books. I’m buying a module to help me spark my own imagination and to get great new ideas from someone else. That’s not really present here. The main enemy, the SwordWraith, also leave me a bit cold. (get it?! Get it?! Cold?!?! Wraith?! Cold!! … Nevermind.) Undead traitors, they have a mess hall and lockers for their possessions, etc. This doesn’t seem like cool unholy undead stuff. It seems like an excuse to put a lot of undead in a module … which you have to do otherwise it won’t be realistic. There’s another strange thing … some bones that rise up as undead. There’s some hefty penalties to turning them because of the ‘unholy ground’ nonsense that’s frequently trotted out. Except there’s not really any references anywhere, except that one statement, that he place is particularly evil or unholy. Just another rationalization. Bleech. The treasure can be light, with only two real rooms anything significant in mundane treasure … and even one of those might be light for a group of 8th level characters.The descriptions of both the mundane and the magical items are none too exciting. I prefer more detail; SOmething to get the players excited about their characters have found. That’s not present here. The magical items are almost all book items with the only bright spots being (the two?) which are not: a simple magical helmet and a Ring of Twilight. It’s a rationalization also, for someone who doesn’t like the sun, but at least the party can loot it.

I’m not sure I’ve seen a module with combat encounters like this one. Maybe Tharzidun and the norkers? But still, even they didn’t have stairs, balconies, and the like with advice on how to run things. The combats here are interesting and challenging and I like that. The rest … doesn’t do a very good of providing evocative settings or things to get a DM’s imagination fired up.