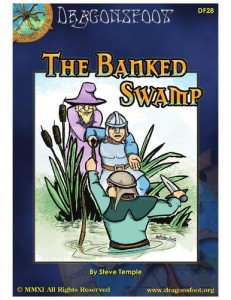 A thick mist, a splash heard in the distance, the lure of treasures untold…

This is a small hex crawl through a swamp. It has limited locales and lacks … direction?

The hook here is treasure. Rumor has it that there is great treasure in the swamp … so go find it and enjoy the wine women and song that it will pay for! Short, sweet, and to the point! There’s an ok little 20 entry rumor table also. Not too much flavor but a decent amount of variety. What’s lacking though is direction. The goal seems to be just to wander around the swamp. That seems … not too productive. There’s also not really a whole bunch of clues about where to find things. A sparse wilderness crawl needs some hints placed to get you going in the right direction. Finding a village may revel a rumor that there’s a ruin down on the McGuffin Peninsula, or maybe Farmer Bob talks about the giant wolf tracks and bloody livestock he’s seen in the foothills east of here. That gives you something to aim for rather than just wandering aimlessly.

The hex map for this is about 32 hexes by about 22 hexes with each hex being 100 feet across. There are ten locations listed on the map with wanderers checking every 3 turns on a 1 on a d6. At standard D&D movement rates I believe that the characters should be able to move 22 hexes a turn, or 11 hexes a turn through swampy ground. This seems … weird. My math says that the entire map could be systematically explored in 10.6 hours resulting in 21 wandering monster checks with about 3.5 wandering encounters showing up during that 10.6 hour day. Again: Turbo Mode Exploration! The wandering monster table is made up of the creatures found in the adventure to a great degree. There’s also some random terrain available, like quicksand, mud slicks, and mud holes, with no advice/text given to help run them. That’s a bit disappointing, as is the lack of a refresher on visibility. Being able to see for X feet in any direction would at least give the party a little heads up that something interesting is nearby. Oh, wait, you can’t see. The entire place is covered in thick fog that doesn’t allow you to see more than 20′. *sigh*

The ten encounters are not the most exciting ever seen. They are WAY too long for what they are. In fact, encounter one doesn’t even count. It’s just a bunch of read-aloud text, like four or five paragraphs worth, that says “you’re in a swamp.” Oh, no, wait. “the stagnant bubbles of air hold the smells in a perpetual embrace.” I’m very sorry your unpublished novel has been rejected, but it is STILL inappropriate to inflict it on the rest of us. Encounter 2? A 1 in 10 chance of meeting a dinosaur. Encounter 3? A hitching post in the swamp. Other exciting encounters are giant flies eating a deer, a crab in the sand, a statue with some stuff underneath, a lightly defended lizard-man village, and the adventure focus: a 5-room “dungeon” with a scrag in it. Oh, and 30 giant rats in one room. The amount of interesting things going on is very small. There’s a statue with a secret door in it, and a magic fountain that transforms the land from swamp to farmland. The lizard-man village could have been cool. WHen the players approach they hear the terrible screams of a human coming from it. Turns out the human is dead (and has not details beyond that.) Expanding on that a bit to have the human alive would have at least provided some motivation to interact with the lizard men. A rescue, negotiations, etc. As presented they are just there to hack down, just like everything else.

Most of the adventure has only a VERY small amount of treasure. Like “3d10 gp” and the like. That’s not going to be NEARLY enough for an AD&D party. Oh, except for the scrag. He has about 23,000gp worth of gold and jewelry. The balance seems just a tad off. In addition all of the magic items are just book standard thing. +1 ring of protection. +1 sword. +1 bow. +1 battle-axe. There’s no attempt to add a bit color either in description or in ability. That’s disappointing to see.

This is a short adventure that the party will turbo-charge through. The fountain at the end is a bit interesting and I wish there was more like it in the adventure. Alas, it’s just full of generic monsters and generic treasure and generic magic items and generic encounters that all add up to a very generic adventure.

2 Responses to DF28 – The Banked Swamp