DF30 – The Village with No Name 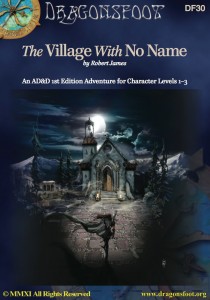 Along the road in a distant location is a village with no name but with citizens under siege by a gang of evil rogues, adventurers, and rubes. Who will confront these men and their leaders? And what twist of fate awaits the PC’s?

This is an adventure in a village that has been taken over by ruffians. It is part social and part combat. There are some decent social elements in this one that make it worth checking out, but the entire thing could use more local color and more social interactions. It’s almost like everything is ALMOST complete. And I don’t mean in that way in which all DMs need to fill in details. There’s a twist to the adventure but very little is done with it or the consequences.  It’s ALMOST a pretty good adventure.

There’s no hook here. It’s just a village. The introduction mentions that the DM should drop some hints about the village to get the characters there but that’s really just throw-away advice. This is a place. Something is happening here. Give the frequency that parties visit villages I’m not sure a DM needs much more. It can just be dropped in, which is the best kind of supplement/adventure. Screw hooks. Hooks are PhAT L00T and _Adventure_. This does that. Nuff said. Oh, wait, there’s also no need to really be a hero here. That’s not assumed although there are opportunities for it. There’s also “do the hookers” and “rob the place blind” opportunities. LOT’s of options for play. My kind of place.

The village has three kinds of buildings. Some have just villagers in them that are either just keeping their heads down or are anxious to help he party get rid of the bandits. This can range from someone who just is willing to answer questions to hookers willing to provide a nice reward, to those villagers willing to join in combat with the party to evict the bandits. The second type of building has just ruffians in it. These range from cold-blooded killers who will shake the party down to other guys who don’t really give a shit. Finally there are the buildings which have both villagers and bandits. Good examples are the inn and tavern. Townspeople run the place and there are bandits visiting the place. The villager-only places and the mixed joints tend to be the more interesting places since they have role-playing opportunities in addition to combat, while the bandit-only places tend to be less interesting. Theres a decent range of flavor across the villagers and bandits, even the combat-only bandits. You really get a decent range of opportunities to play with in terms of personalities.

There are maybe two issues I could point to.. First, many of the combat-only bandits/buildings don’t really do a good job in foreshadowing their occupants. I think this is critical to building suspense in players. There are several decent bandits who could use more explicit hints dropped. A teen bandit known as The Cannibal lives in a place with a couple of scraggly dogs. If the party just shows up and kills him then where’s the anticipation? But if they hear some stories of him, see the other bandits defer to him or give him a wide berth, well then you’ve really got some dread built up in the party. That sort of thing isn’t really done very well at all and there are several bandits could benefit by it. Secondly, there’s not a lot of interaction between the various buildings. The villagers don’t have many/any relationships with people outside of their own building and the bandits don’t really move around much/at all. Inter-building relationships and sub-plots are critical for a village to feel like a real place. Both intra-bandit/intra-villager and inter-mixed relationships are missing and would bring much more flavor to the adventure. How about a love triangle between a villager, one of the hookers, and one of the bandits? There are many good NPC personalities in here but they mostly feel static.

There are a couple of plot elements in the adventures. Actually, let;s say “timeline” instead since that has less of a negative connotation. Plot is railroad. Timeline is stuff going on around the players that make it seem like the place is a real living and breathing environment. There’s one major timeline element. Uh … I don’t think there are any others .That one element is meant, I suspect, to make all hell break loose in the town. It feels flat though. The adventure could use a few more suggestions on how the bandits react to the players, how the bandits and villagers react to the twist, and things like that. I’m not looking to be spoon-fed but I would like a little more to work with. Not 2 pages of text, but a brief section of general advice would be nice.

There are a couple of decent magic items that are non-standard but for the most part it’s just book items. That’s disappointing. There are also a couple of gimp items that show up. These are meant to allow some notable NPC’s to escape butchering at the hands of the party. LAME-O! I should mention also that he adventure features assassins, a troll, and a monster that can only be hit by magic items. That’s some pretty hefty challenge for a first level party. That’s not a problem in general but probably does need a little more foreshadowing.

I like village adventurers that are done well and I like failed villages. There was a Troll Lord adventure that had several in it that I also really enjoyed With some work this one could be turned in to something better and really worthwhile. But it IS going to take some work.

2 Responses to DF30 – The Village with No Name