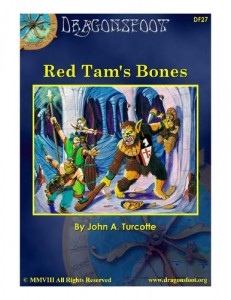 Can you find the bones of Red Tam, the notorious Bard?

Fey abound in this adventure pack. This has both a significant wilderness adventure and a nice house-crawl ala Shadowbrook/Amber/Tegal. It is plagued by some longish text but otherwise does a great job of recreating a kind of idealized land of wicked abbots, noble manor lords, and the civilized faerie folk. And remember, I’m unusually drawn to this kind of fairy-tale fey stuff.

That silly little blurb does not to this one justice. It does a great job of re-creating a kind of fairy-tale English setting. It has two adventures: a wilderness trek to find the burial place of a wicked, and dead, bard and a house-crawl similar to Amber. It does a good job giving the DM enough to get their imagination going … and then stays FAR too long in some cases.

The first part is similar to a hex crawl, but without all of the special hexes. An abbott is trying to break the charm on a young lass and he needs the bones of the deceased bard who placed the charm to interrogate him as to the solution. Except no one really knows where he’s buried. There are a couple of rumors to get folks started, but that’s all they are: rumors. There are different wandering monster tables for the Moors, Forest, Swamp, and Fairy Paths, all of which generally have a fairly heavy lean to the Fairy and wilderness/beast side of the house. In fact, the goblins, ogres and kobolds could be given a decent fairy bend with a little advice and work on the DM’s part. The manticore and displacer beasts feel a bit out of place in comparison. There;s not much given in the way of advice for the wandering tables, just a little expansion to the “Men” encounters. This is a little disappointing; this portion of the adventure relies a great deal on the wandering table and a little flavor would have been very nice. The party has another group on their heels for their wilderness crawl: The Three Very Fine Gentlemen. Fey, of course, who don’t want the body of their pal Red Tam found/disturbed. They annoy and confound the party with their fey ways, although not much advice is given in this area. While the NPC’s are painted a vivid portrait their meddling is not … although it’s implied that a couple could resort to combat. They make sure the party doesn’t have good luck; making noises when they hide and generally trying to cause a little mayhem as subtly as they can. Four general locations are described in a bout a paragraph or so and two are expanded upon. One is Damned John O’Crewet, a manor lord doomed to wander the moors, while the other is a set of fairy mounds where the body is. Damned John is a strange encounter. It’s full of flavor, and rather long at 3.5 pages for what it is, but it could essentially a non-combat encounter. What’s strange is that it’s surrounded by essentially combat encounters or generic encounters (from the wandering table) that are most likely going to be combat encounters after the Three Gentlemen have their say. The important fairy mound gets a great description, and the general locations are all very evocative, but there’s not a lot of more specific flavor.

The second part has the party being sent to collect Red Tam’s bardic instrument, a rebeca. It’s in a manor home that was burned to the ground to stop the petty evil that was there. Now it’s a fairy manor, appearing only from dusk to dawn at its former location. Played wisely, this section could be very heavy on role-play with not much combat. This is Castle Amber with more flavor, less insanity, more fairy feel, and more direction in how the inhabitants react. There are servants, guests, and the Lady of the House at home, as well as a bit of vermin lurking about. This section is VERY heavy on flavor. Generally each room gets between one and three of so paragraphs of description with some taking much more. The first paragraph usually is QUITE evocative and more than enough to get a feel for the room, while the ones past the first overstay the rooms welcome. A room decorated with wood panels painted with grand designs and fantastic birds of paradise, now deeply water-stained, with a cold wind blowing out of the empty fireplace. That’s a rocking description. It’s then supplemented by another telling how the doors are stuck and need to be forced open, and too much information about the contents of the room. The folks in the rooms get good treatment also, which also goes a bit long. The designer manages to paint a great picture of them in just a couple of sentences detailing their personality “Grampus is a sour, dour soul He is joylessly gaming at the table…” Great! Exactly what I need! Which is then supplemented by a paragraph detailing all of his stats and armor/weapons. The NPC’s really are well done, as are the encounters. Talking rabbits hanging in the kitchen, fire elements in the fireplace collecting their own firewood. Well done illusion traps, and grey elves “listlessly haunting this room.” That tells you ALL you need to know on how to run the room. It’s like you’re wandering through a fairy tale, say, Jack & the Beanstalk, encountering all of the animated objects and people, almost none of which are initially hostile. Besides the description verbosity the only other thing I’d comment on is the lack of an order of battle for the house. There are some hints here and there like “the occupants of room 13 will respond to sounds of combat” but just some general comments about “bodyguards reacting” or the “household mobilizing” otherwise. A short paragraph with more specifics would have been helpful.

The common treasure is very well done, each getting their own description, and usually a very good one at that. A giant milk pelt on a bed, electrum armband set with opals, or a silver torc set with amethysts. I LOVE descriptive common treasure; I think it adds a lot to the game. The magic treasure is a mixed bag. There are great things like a bell that acts like a wand of enemy detection, and a wand that slays insects, and a jewel that acts as a stone of weight, a light blue potion with a feather in it (flying) and another green one with a frog in it (poison.) Those are GREAT items that will cause a player to hang on to them and delight their imaginations. Then there’s the “Bastard Sword +1” carried by the evil manor lord on the moors. The dude gets 3.5 pages of description for his encounter, has his regalia described, but all we get for a weapons is “bastard sword +1.” ARG!

This is a wonderfully evocative adventure, especially is you have any interesting in victorian/edwardian/regency England and/or fey.