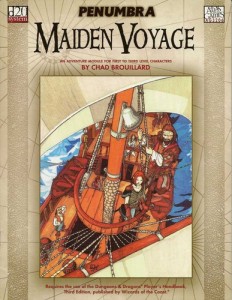 There’s a tale you might hear in a tavern by the docks if you catch an old sea dog on a dark night laden with rum. He’ll tell you of an all but forgotten sea god with a hatred for the living and their ships that so brazenly cross his waters without offering the blood sacrifice he demanded in the days of yore. The god’s powers have been waning, as brave sailors of all the races bravely cast off in search of far horizons and treasures to fill their holds, but on the darkest of days his might returns. The grizzled sailor may have known someone who set sail on the Sea Maiden, just before such a day three decades ago, and never returned. Others may tell you that the crew of the Sea Maiden was restless, and mutiny was in the air; the crew no doubt ended up hanged as pirates in a distant port. But your storyteller assures you he knows better: the dark god of the sea had his vengeance — and he will have it again one day soon.

This is an encounter with a ghost ship while on sea voyage, and was a pleasant surprise. It supports well the social aspect of the adventure and doesn’t go into great verbosity about either the ghost ship or the player’s ship. Instead it (correctly) concentrates on the people and the activities. This supports the DM in running the adventure. The adventure knows what it and it stays focused on it: it’s a zombie movie.

The Zombie Movie, like Science Fiction, has some underlying themes with the zombies (or zapper guns) just being a backdrop and/or pressure. They have a message, and it’s usually something social. This adventure sets the players up on a ship and then puts pressure on the social environment, both positively and negatively. An abrupt captain. A mistress that the superstitious crew don’t like. A card cheat. A naive cabin boy. A criminal is lockup. A surly cook. The list goes on. Each is a decent trope, and thus easy to remember. The social situation boils during the adventure, up to the point the captain is found dead. Things are then set in motion with the various people forming cliques … all while becalmed in fog. An abandoned ship appears and is then dealt with. It then returns to launch a couple of zombie attacks. That’s the critical moment in which all of the players actions in the adventure come to a head. Did they foster the cliques, treat the sailors like shit, or try to work for unity? How the zombie attack completes is based on what the players did up to that point. ((Not formally, there’s no table or anything, just some advice.) The adventure SUPPORTS the DM in running it, not by exhaustively providing stats or DC checks, but by providing opportunities and consequences and advice. It’s a sandbox social adventure, on a ship.

The player’s ship is described in about two pages. The descriptions concentrate on how the characters will interact with the rooms, not their mundane contents. They crew play darts here. The poker game is here. Bob hangs out here most of the time. People & Activities. This isn’t an exploration adventure, it’s a social adventure, and the author knows it and stays true to the material supporting the social and paying little attention to the exploration, as he should.

Let me cite an example or the setups provided. At the start someone is brought on board by the shore patrol that looks unconscious. The captain orders him put in the brig. A drunk sailor? Something else? The players later learn he’s a criminal being taken somewhere to be turned over to another country/city. If they talk to him he claims to be innocent/persecuted because of who e is. He’s sharp. The players probably figure that out. He works his way in with the crew, especially the marginalized ones. In the end he figures out what is going on before everyone. Now imagine this guy in a cell, up against the bars, screaming about a curse and ghosts and all that. You KNOW he’s a liar and a cheat and will do anything to get out of that cell. What to do, what to do … It’s WONDERFUL. There are a lot of situations like that. There are a lot of little details that bring the place to life, but are easy to remember and run. But it doesn’t go overboard.

I have no problem saying this is one of the better adventures of the d20 era and while not perfect it does a much better job of setting up and supporting a social adventure than almost anything else I’ve seen. Like all/most good social adventures, it could be used in almost any time/setting/genre, as long as you’re willing to throw in a few zombies. It needs a social cheat sheet to go along with the combat one, and maybe a summary of the ship/events also. Otherwise, it’s very good at what it does.