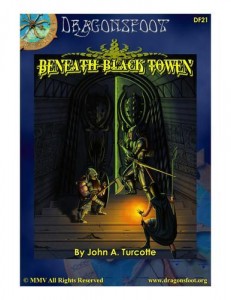 Once again evil threatens The Land Of Song and heroes must be found.

This is an adventure in the dungeons of a destroyed fortress where evil forces are beginning to mass once again. It’s got a lot of neat little details in it … which are surrounded by boring guard room encounters. A LOT of guard room encounters. A lame hook but a nice little OD&D feel at times … which is a compliment. 🙂 This is a sequel to Where the Fallen Jarl Sleeps. It does devils very well.

The cowardly northmen are at it again! After failing to protect themselves in Fallen Jarl the northmen once again seek out the heroes to save them Their old enemy has seemingly returned: Her Dark Majesty. The hook is short and not very motivating or clear. The wise woman foretells the evil ones return so the Jarl sends the heroes to take care of it. They have to be strong, they have to be true and they have to belong to the night. There’s a nice little rumor table, but the introduction and background are not very involved, which is a good thing. I hate being bored to death by backstory. There’s a decent little wilderness journey to get to the adventure site; just over a week probably. That’s going to be about 24 wandering checks, with a 1 in 10 chance. The lowlands, hills, and high mountains all get their own eight entry chart, charts which are very good. There are some wilderness hazards like avalanches and blizzards but the real attraction are the creatures. The designer does a good job providing a little extra information for each to make them standout a bit. Coffer Corpses, cloaks flapping in the wind, A Grim looking to help out, highlander berserkers, a helpful snow maiden, or refugees with horror stories to tell. They tend to have a paragraph or so of detail, amounting to a couple of sentences, and that;s generally just enough to make them stand out and provide a little assistance to help me run them. It gives a taste of the Northlands which could perhaps be a bit stronger, but the encounters do stand out.

The dungeon under the ruined fortress has four levels with about 35 or so encounters on the first three levels and about 20 on the lower level. The maps are not terrible complex, from a looping design standpoint and do also show a touch of the hated hated symmetry. They do, however, have multiple areas on each level that can generally only be reached by going lower and them coming up a different set of stairs. It’s not the full blown “multiple paths between levels” that is encountered so rarely but it does provide an extra little touch that I appreciate. There are also notes about creatures on lower levels responding to noise on upper levels, especially at the stairwell rooms. Well done.

I found the encounters frustrating to no end. There are all sorts of cool little details in some of them and references to stairwells that go different places and so on. That can get me very excited when looking through an adventure. I REALLY like an OD&D feel: that strange and wondrous combination of whimsy and idiosyncratic which is impossible to mi/max rules lawyer your way through. It can make a player think they have no idea what is going on. That’s exactly what they SHOULD be thinking since this is a fantasy world and not a Victorian catalog of botany. Open a door and billowing choking fumes roll out of it followed by swarms of carnivores flies … now that’s what I call a portal to hell! Or sit in a chair that summons an invisible servant to do your bidding, or command the skeleton in a room; these are all great examples of cool little things that help bring a dungeon to life. Those are the kind of details I’m looking for to help me run a room. This is supplemented by allies in the dungeon. No, really, allies! There are slaves, prisoners, and actual damsels to be rescued! There are even mushrooms you can eat that not only DON’T kill you but also provide nourishment! Far,far too often published adventures contain only things that want to kill the players. All food items poison. All damsels are polymorphed demons. That kind of adversarial design discourages players from really exploring and getting in to things. Why rescue someone when you just KNOW it’s a doppleganger/demon/etc? Why eat a mushroom; it’s just gonna be a save or die … None of that here; it feels a lot more neutral and because of that a lot more fun to explore, I suspect. Both this adventure and Fallen Jarl features devils in it and the devils are well done. They tend to be the leaders and use their illusions well. The devils feel like the evil masterminds they are supposed to be, and all without the railroady DM bullshit that some modules use to make the point. They are done simply and well. Bravo! There is also a little hook nin the dungeon which could lead to a truly epic rivalry, reminding me a lot of the Galactic North SF story. It would be really cool for the party to encounter to rivalry over and over again, in song, person, or symptom, as they pursue the rest of the adventuring career.

But those tend to the exceptions to the rule. There are a LOT of guard rooms in this place. That’s not really a problem. The problem is that the guard rooms tend to be boring. Another guard room with gnolls. Another guard room with evil dwarves. And guard room with the Black Watch. Zzzz… The room holds six duergar. They are armed with blah. They are armored with blah. Their leader is blah. He is armed with blah. He wears blah. There are coils of rope and fishing nets in the room. Repeat. Repeat a LOT. There is also a scattering of other rooms with creatures that can be boring also. The rooms need to be spiced up a little. Not all of them, but some. They need some variety. They could also use a better Order of Battle. These guys are supposed to smart and led by a genius; how they respond to the players incursion could be more laid out, which would be a great help in running it. The mundane treasure is generally well done, with good descriptions of the items. The magic items tend to be generic book items spiced up with a few special weapons, like a sword that does extra damage to fey, or frost-brands, or swords of wounding. I appreciate the extra details but they could have used a little more. Maybe a bit more description or a little more unusual effects for some of them. That kind of detail can turn Just Another Item in to a treasured item a player keeps long after it’s game usefulness ends.

There are at least three modules in this seres: Where the Fallen Jarl Sleeps, this one, and Stormcrows Gather. As I work my way through these modules (Stormcrows should appear next) they are growing on me quite a bit. The production values, which I don’t usually comment on, are top notch. I’m guessing this is donated time by the Dragonsfoot collaborators and they’ve done a fabulous job. The series proper is a good one, each one building the shared mythology of the Land of Song. Despite my mocking of the Northmen this is a very good series; one of the best, free or otherwise. My problems with them relate specifically to the ‘be a hero hook’ and my perceived view of the encounters being a little relentlessly monotonous at times. Yet more Undead in Jarl, or Yet Another Gnoll/Dwarf room in Towen. If you want vikings, or a human-centric campaign, then the series would ratchet up quite a bit.

2 Responses to DF21: Beneath Black Towen