DF19: Church of the Poisoned Mind 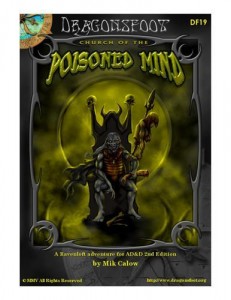 The party has come across a ruined church situated between a forest and a swamp. A thorough search reveals nothing other than a storm cellar door, which shows signs of recently being uncovered (the rest of the ruins are overgrown with weeds and grasses.) There is, curiously, no graveyard.

This is another expansion of the sample dungeon is the 1E DMG. The first three rooms are the ones in the DMG while the rest of the rooms attempt to expand on it. This one claims to have deep ties to Ravenloft but in reality it’s really just Yet Another Module with little to distinguish it. It’s supposed to come across, I believe, as a creepy old church whose brother monks have turned to cannibalism/tuurned in to ghouls/ghasts. That doesn’t really come across very well though.

This one pretty much jumps right in to the action. Without only a paragraph or so of introduction it adds a couple of new rule variations for undead: ghoul paralysis that impacts limbs instead of the entire body and some alternate energy drain effects. These are clearly meant to limit the impact of a couple of serious effects, but I like them anyway. Monsters should feel mysterious and dangerous and adding variety to them is a very good thing. I would never want a player to be able to quote monster powers back to me, verbally or subliminally, at the table. The game should be full of wonder and mystery and The Unknown, not a min/max exercise. These sorts of rules supplements are a welcome addition that help achieve that. I also like, in general, seeing additional information on the theme of a module. If you’re going to have an undead-heavy module then a few BRIEF additional rules/descriptions/thoughts on the undead are nice to see. Got lots of bags? Then how about a bag generator? Got lots of bricked-up walls? How about a few supplemental rules for breaking them down! The rules don’t have to hang around forever and Variety is Spice.

The encounters here are not that dazzling. In fact, it looks like even the first three, straight from the book, have been watered down. There’s no yellow mold. The rooms are mired in mundanity. Each one starts with a short, and generally uninspired, read-aloud paragraph followed by a paragraph of meaningless text. I know it was the style at the time to wear an onion on your belt, but the read aloud thing is stupid, especially as presented here. The supplemental text after the read-aloud is uninspired. The rooms are too mundane; there’s nothing much interesting going on. There are three exceptions. In one room you can find a body stuffed in a pickling barrel. In another opening the door will cause the contents to spill out, down the sloping corridor. Finally there’s a nice description, in the read-aloud, of a maggoty corpse: “When you open this door the smell that reaches you is enough to make you gag. Lying on the floor is the maggot ridden remains of a human male.” Yes, that’s a good one; something is going on. Otherwise … the rooms are not so interesting. Skeletons, ghouls, ghasts, trash … just lots of boring little rooms. “This room was once opulently decorated but has been allowed, almost encouraged, to fall into disarray.” What’s the point of that? Why not put that in the DM text and allow me to describe it? This room has two ghast lieutenants who fire crossbows as soon as the door opens. Not the most dazzling or interesting of rooms. There is an hourglass which opens a secret door when turned over; that’s an interesting and strange little effect. This adventure needs a lot more of that type of thing.

While there are no new monsters the variable paralysis/energy drain effects in the beginning should have much of the same effect. The mundane treasure isn’t too bad, with things like a golden hourglass filled with silver powder. That’s some nice detail that should distinguish it from just another XP-giving loot. The magical treasure is more disappoints, just being book items. Spear +1, “potion of clairaudience” and so on. I really dislike book items, although the emphasis on consumables is welcome. I want magic items to invoke a sense of wonders in the players and to be mysterious. That’s not going to happen when they find “spear +1.” More troublesome is the lack of treasure. You’re looking at about 2000gp in coins and not much in the way of items, with only one room really having anything in it.

Monastery of the Order of Crimson Monks did this much better.