DF18: Where the Fallen Jarls Sleep 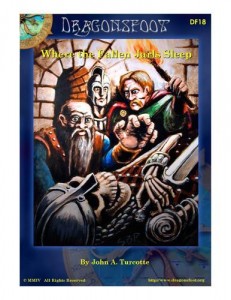 Take a little of the ICE supplement Bree & the Barrow Downs and combine it a dash of that room in which the earth mother was killed in The 13th Warrior. Creepy barrows with a shit-ton of undead. Gird the clerics loins boys! It’s Turn Undead time!

Evil, pure and simple! From the Eighth Dimension! Err… plane! This is an undead hack in a bunch of barrows/caves carved in to the walls of a valley/gorge. It’s got a lot of undead. A LOT … and little else. It also has some bullshit ‘be a hero’ in it. And the party gets gimped on treasure they recover. Stupid Northmen! You don’t want your ancestors tombs looted? Then don’t go hiring mercenaries to solve your problems!

The homesteads of the northmen are being attacked by evil! Undead! The leader has called in outsiders to help because Northmen are all cowards and/or quitters, being demoralized after six of their champions failed to return. The background/introduction here is only a page and a half or so. Long but not Russian novel long. There is an excellent four paragraph note on running the undead, since this adventure is so heavy on them. It basically consists of a brief rules clarification on the turning of undead and a little advice on running them. Ye old DMG1E has all of the answers and things I thought were broken in Turn Undead were clarified by the designer. Very Nice. He also does a good job in giving advice on running the undead, based mostly around descriptions, which should add a nice element of horror and quite a bit of mystery to them. I LOVE it when the players are left guessing about the monsters they encounter and that’s what a decent amount of the advice boils down to. Describe the creature, not the Victorian Categorization. Zombies, Coffer Corpses, and Mummies can look a lot alike. That’s good advice for ANY game.

There’s a short journey to the burial valley involved so there’s also a little wandering monster chart of twelve or so entries. Each entry tends to have a nice little bit of detail to help run the encounter in an interesting way. The Gnoll Raiding party, for example, has been having trouble with the wandering undead, the very problem which motivates the characters, and are willing to parley and negotiate. There’s also a nice Hag encounter, Berserkers that make sense, and some survivors with some pretty good ghost stories about their dead children returning to knock on their doors at night … that’s some good detail there. It does take some decent amount of text to provide that detail but it doesn’t feel verbose, or maybe it’s just on the edge of feeling verbose. I like a short encounter description with enough detail to get my own imagination going but not so much I have to wade through it to pick out the important details. This does a pretty decent job of hitting that while trending just a little to the verbose side of the house. There’s another good little bit that’s changed my thinking also. It’s a devil leading an undead patrol, but the devil is different. He’s using his illusion powers to appear to be a 7′ tall naked giant with a big carved pumpkin where his head should be. That’s quite an interesting take on a bearded devil, and why not? A world where devils ALWAYS use their illusion powers to appear to be something else, and someone out of human nightmares, is a much better take on a devil than Just Another Monster Manual Entry.

The players eventually reach the valley/ravine where the burial crypts are carved in to the walls. This is also where interesting things stop happening in the adventure. The valley is a bit like the one in B2: Keep on the Borderlands. The walls are lined with caves but unlike B2 the caves are really just a single room. Imagine a small 15′-20′ corridor and then a small 20′ round crypt/room. Then repeat fifteen or so more times. A couple of the crypts are a bit larger but not by much. The end-game crypt with the Big Bad has maybe twenty rooms over five levels. The problem is the large number of undead. The adventure seems to transition from a vaguely Finnish horror story feel to Just Another Hack, but this one with undead. A LOT of undead. One room has thirteen shadows in it and that’s not an unusual encounter. Good luck with those STR stats. The large number is probably mitigated by the Turn Undead power, but it’s still a lot. The real issue is that the monsters tend to be presented in a rather bland way for the most part. “Another pair of ghasts can be discovered here” or “within this mound await another 13 shadows”. While the crypts themselves have some token descriptions (insert ludicrous deeds of the fallen jarls as memorial runes) the undead themselves tend to not have any. They get turned in to the very generic Just Another Monster that the introduction warned against. I appreciate the advice but the sheer quantity of the undead means I’m gonna need a little more help with the various encounters. Help that is not present. There are a couple of exceptions, like the room with a couple of fat ghasts dressed like kings on a burial bier. It’s a longish encounter text that could have been much much shorter but it does provide that spark os inspiration I’m looking for to help me run an encounter. The number of non-combat encounters is an issue also. I like things for the players to play with in the dungeon as well as other non-combat things to do and those are generally missing.

There’s a decent job done on the treasure and monsters in the module. While most of the monsters are just from the book the advice in the beginning does make en effort to keep them fresh. The Gorecrows, Heartless Ones, and Black Watch are all nice little additions to the monster mash. The mundane treasure is pretty decent with at least a token description of each, such as “silver necklace set with jet” or “platinum pendant set with amethysts”. The magic items are generally book items with a few standouts. There are some ‘spears of fire’ or ;+2 dagger, +3 vs shape-changers’ which at least makes an effort at making the items a little more wondrous and magical. There’s just not enough of it though; most of the items come straight out of the book in “sword +1” variety of descriptions. That robs the adventure of the cred it’s built up with its horror and norse themes. There needs to be more items like the Berserker Cloak (fur cloak/skin that lets you take the form of a brown bear, and might curse you as a werebear eventually …) or the +1 shield with the name and standard of one of the former jarls. Better yet is the chunk of amber with a wasp stuck in it that can be summoned! That’s the kind of weird stuff and/or twist on a book item that I can really get behind and support. It makes the game seem to be something other than a book game. It lends an air of magic and winder to a game.