DF16 – Skein of the Death Mother 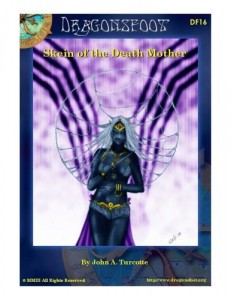 This is an alternate dungeon to swap in to Q1: Queen of the Demonweb Pits. The DM replaces the spider ship in that module with the dungeon found in this module… The Demonweb Pits! It’s a pretty good emulation of the style at the time … iand it’s mostly a hack-fest, just like Q1 was.

The designer was unhappy with the spider-ship finale in Q1: Queen of the Demonweb Pits and set about creating a dungeon that he thought was much better fit to the tone presented in D3: Vault of Drow. Once the final set of bronze doors is navigated in the web levels then the party ends up here instead of at the spider-ship. Several of the rooms have the same themes and occupants that the spider-ship does although the environment is completely different. The influence of the ICE/MERP Cirith Ungol supplement shows through as well and the Demonweb Pits turns out to be a mashup of the encounters in Q1 with a map/setting inspired by and similar to the Cirith Ungol tunnels. It’s been a long time since I’ve looked that supplement over but the nostalgic memories I have of it are certainly well represented. It certainly feels a lot more like the lair of the Demon Queen of Spiders.

The Pits are some caves that appear to have been eaten out of the natural rock of their abysmal layer. They spiral and curve and vary in width and open on to natural caverns. And they are FULL of webs. Some are completely filled with them and others just have them in abundance. There are spiders EVERYWHERE of all sizes … but those, as well as the dead husks of creatures are just windows dressing creep out the players. There’s about a quarter-column or so of flavor text that describes the general vibe of the place and it does a pretty terrific job of setting the scene. There was just enough information to get my own imagination going in to overtime. I also appreciated the small section on ‘burning the webs’, as will anyone else who has read the actual play report of the same dungeon in the DMG. The map has a pretty decent variety of changes in elevation and the like even though it is essentially just one level with about 37 rooms. The wandering monsters are spiders, spiders, and spiders, with spider-like things thrown in and a couple of demons, trolls and ogres for good measure.

The yochlol greeter, matron, and handmaidens show up again, although in different settings since these are not the polished interiors of the spider-ship. Instead we get the scene described earlier: web filled rooms with spiders and dried-out husks everywhere. This then is both the charm and problem with the dungeon: it’s cribbing a lot from Q1. I grinned when I saw the matron and handmaiden encounters, but Q1’s encounters were generally uninspired, according to my vague recollections of it. Room after room of guards and creatures for the party t hack down. It reminded me, as does this adventure, of the Norkers in WG4: a pitched battle develops and everyone shows up to join in the fun. Lolth and the demons are smart and they are going to organize and hunt the party down, gating in as much help as is needed, until the party dies. The party in turn is going to have a terrible amount of hacking to do.They might be able to do it in something other than a pitched battle if they are good, but that just means the monsters die alone in their rooms instead of together with their buds in the next room. The rooms here are just not that interesting. Lolths throne room is described well enough since it will likely be the scene of a large battle, and there a nice little evil temple for the creature LOLTH prays to. I found that to be a pretty nice little encounter. Otherwise though the party is just facing trolls, ogres, spiders, demons, and more spiders in rooms have nothing interesting going on in them. One or two have some nice gruesome descriptions but that doesn’t excuse the fact that they are just a different setting to hack something in. There’s more than one “demon pretending to be a beautiful girl/boy” encounter. You know what I’d do in this situation? Kill em and let Pelor sort’em out. It’s the frigging Demonweb pits … I figure I get a pass from the big sun guy for kill the demon queen of spiders and patron of the Drow.

The mundane treasure has nice detail (copied from Q1? I wish I wasn’t on a plane right now.) to it but it’s still of the pretty standard gems/jewelry variety. The magic items are almost all book items, although some of the more unusual items appear, like an iron flask. Arachrist also makes an appearance, which I seem to recall originally being in Cirith Ungol.

This is an interesting adventure and a good replacement for those turned off by the spider-ship in Q1. It does a much better job of capturing the feel of the Demon Queen of Spiders even if it does suffer from ALSO being a hack-fest (GDQ a hack-fest?!?!?!! *gasp* Say it isn’t so!) I’m happy to say it avoids most of the gimps that high-level modules usual come up with. The restrictions from the planes are still there but otherwise just some stronger spider-venom shows up, and at pretty reasonable -2,-3 save vs. poison levels. It’s a cute mash-up of Q1 and Cirith Ungol and worth looking at if you’re familiar with both. I wouldn’t have a problem replacing the spider-ship with this … but G1 and D3 are really the only decent modules in that series anyway.