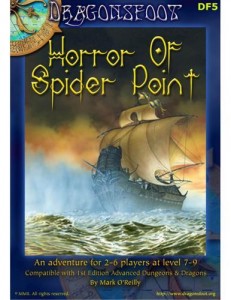 Being dropped into the middle of a strange and eerie island, your adventurers have to fight for their lives to escape the evil that inhabits this weird island.

This is yet another adventure in the “Night of the Living Dead/Zombie Assault” genre. You can check out my review of Dusk of the Dead for a similar adventure. This one is set in Ravenloft and covers most of the required horror bases. It’s not terrible but nor does it particularly stand out. There’s a set of additional higher quality maps available at Dragonsfoot for those who are interested in that sort of thing; I’d use them if I ran it.

This is a timeline based adventure. The players are transported to the island just just before dawn through some DM fiat mechanic. ‘The mists’ are suggested but I believe something like a reprobate sorcerers spell would be appropriate also, as would a curse or geas. Anyway, the players arrive on a beach that is the scene of bloody carnage. A large number of zombies with meathooks come shambling out of the ocean and engage the players, only to retreat back in to the ocean a few rounds later as the sun rises. This starts the countdown; it should be pretty obvious to even the most clueless players that the zombies are going to be back at nightfall.

Investigating the very small island reveals two key features: there’s a small boat with a gash in its side that could be repaired given enough time, and there’s a house further up in the island/hill. The house has boarded up windows, some smashed through. All of the doors are off their frames. The inside is full of spilled blood and scratch marks and appears to be the scene of many a last stand. Tick tock, tick tock, look at your watch now ….

The timeline covers the period from 6am to midnight and has two types of events on it. First there are the four zombie horde attacks. These happen from dusk through midnight and simply indicate which group of zombies attack and what their tactics are this time. The second set of events are all flavor-text. Screams from elsewhere in the house, blood oozing from walls, frost in the basement, and a mysterious bonfire lighting. An examination of the boat reveals it won’t be able to be seaworthy until 9pm or so, well after sunset. The players are clearly meant to make a stand in the house. Searching the house reveals some journals describing some history or the situation and a parts of a broken artifact and the spells required to make it work. There are also a couple of things to help fortify the house: planks and acid chiefly. That then is the adventure. Players are stuck, they search fortify the house, the zombies attack, the big bad appears/attacks at midnight with the last horde and then the players dismiss him with the artifact.

The sea zombies are pretty good. There’s a decent horrific description of them and their meat-hooks have a nice effect where they ‘hook’ a character and drag them off. Similarly the Big Bad has decent horrific description. There is almost no treasure at all though. A +1 dagger, a basic spellbook and a couple of coins. I know the module is going for a horror feel but this is AD&D; the players need treasure to get XP.

I’m not really sure about this one. The zombie assaults have 30, 45, 45, and 90 zombies, respectively. That’s quite a few. The players could potentially have some 9th level spellcasters which could make the boat repair much much faster. I know it’s supposed to be a slow build up but I’m not sure there’s enough to keep the players interested during the adventure. In addition, the breaking down of the boarded up windows and doors, as well as zombies climbing the walls, are a major part of the adventure; some guidelines on running that or some new mechanics would have been a good inclusion.

If I was forced to run a Night of the Living Dead adventure on a moments notice I would pick this one, but I’m not sure that’s high praise.