DF12: High Atop Dragonmount: The Legend of the Stronghold of Arolon 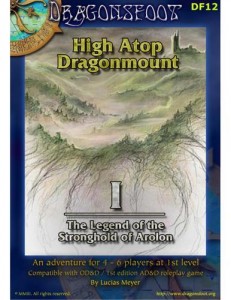 … Even today, in the darkest times for the once great Empire, legends persist about the wealth of Dragonmount. Anyone who spends an evening in any tavern throughout the Province of Karathfen is sure to hear at least one exaggerated tale of the place. It calls to adventurers like the winter calls birds south.

The adventure begins with about a page long description of a hill, as well as the fortress and keep located on the hill. It’s a longish description but would be a great introduction for a megadungeon. It has just enough mystery in it to pique someones interest and make the “like the winter calls birds south” line plausible. This isn’t a megadungeon though, it’s just a couple of levels of a ruined fort that sits on top of the hill. There’s no reason offered for the players to explore. Hurray! I HATE it when the characters are sent on missions. Actually, I find it generally off-putting and am much happier when the PLAYERS are engaged rather than the characters. PHAT L00T! is a great way to engage the players.

The fort has two levels with about thirteen rooms/encounters on the first floor and another six or so on the second. The maps are pretty symmetrical and I REALLY don’t like that. I think it removes a lot of the ‘exploring the unknown’ element in a game if you know what to expect. The designer notes that he dislikes symmetrical maps also, but justifies it because the adventure is for new players and they should get an easier dungeon. Plus, he says it makes sense for keeps to be designed that way. Maybe … but I’m not looking for realism in a game. I want to have fun and symmetrical doesn’t hit that. Besides, if you’re going to put in a symmetrical map then use that to your advantage: put in a secret door or something that rewards players who pay attention to the map. “Hmmm, there should be another room here …” The wandering monster table comes from the creatures in the for but is uninspired: rats, cockroaches, skeletons and Evil Monkeys.”

The encounters are not that bad but I don’t seem to be able to get excited about them. Maybe that’s a better description of the entire adventure: decent, but I’m not excited about running it. The rooms all seem to have a little something going on in them. I don’t mean just a monster, or a trap, but something more interesting. Graffiti on the walls, or a locked room whose door opens _just_ a little … enough to tantalize the players and frustrate them in their efforts to get in. Actually, that rooms a decent example. It’s a room whose door is held shut from the inside by an Immovable Rod. It’s a bit loose, so the door opens just a couple of inches .That is a GREAT room! Unfortunately it takes the designer two longish paragraphs to describe the room. That’s a total buzzkill. There are other great rooms also. One clearly has something locked inside of it. Another has a spellbook trapped in some green slime. The place is littered with dead adventurer bodies. All in all, most rooms have something quite interesting going on which gives the place a sense of life … which is then trampled by the excessive text.

The new monster, a monkey with a kind of scorpion tale, is nice. It drains DEX until you’re paralyzed. There’s also a decent good done on some of the mundane treasure. Fine wine, silk shirts, rings still on fingers and so on. In contrast. most of the magical treasure are just book items and not presented that interesting. The rare exception is a potion of poison which gets a nice little description. That’s the kind of thing I’m looking for in monsters and treasure: something fantastic. Something with a little something going on so I can expand it further. “sword +1” is boring, but add a little flavor text and give it some unusual power and now I’ve got something my feeble imagination can run with. A couple of the creatures also have names. In my mind this implies that they can/will interact with the party in some way other than combat. I wish something a little more explicit had been done with them; as it stands they seem to just be there to be hacked down. The ghoul and bugbear could have offered up some interesting interactions. I’d note, also, that the climactic battle with the stinger monkeys fails to mention how many monkeys there are. Oops.

It’s a decent, if a bit generic little adventure module. It suffers from too much descriptive text but it’s not at the level of 3.x modules. It’s got some decent little rooms. A little bit of work on the magic treasure, names monsters, map, and some editing could turn this in a great module. It’s a cut above other freebies, but I’m not sure how much of a compliment that is.

1 Response to DF12: High Atop Dragonmount: The Legend of the Stronghold of Arolon