The Forgotten Temple of Baalzebul 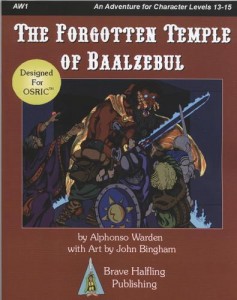 Several centuries past, a shadowy sect sought to enslave the world in the name of their dark lord, Baalzebul, one of the arch devils of Hell. They carved out a massive subterranean temple. The clerics of Tyr were eventually able to raid the temple before their ambitions could be fully realized. Cut to the present: A company of clerics calling themselves the Order of the Black Lotus have journeyed to the evil fane with the intent of reviving the forgotten cult of Baalzebul. It is up to you to see that they don’t fully unite with the undead servants of Baalzebul, unleashing the arch devil’s horde upon an unsuspecting world.

An overly-complex, and not in a good way, dungeon full of deathtraps and monsters in stasis. A throw-back to jr. high dungeon design where the DM was antagonistic.

Sit down and really think about this: What’s your favorite Gygax module? Some people like T1; the village and dungeon are pretty good. I prefer G1 and S3, ranking them among the best adventures modules ever produced because of their maps and the nature of the encounters. Some people prefer Tomb of Horrors. I think those people are morons. It reminds me of the worst of the antagonistic DMs I ever played with. Recently at a gaming party someone invited me to his 3x game. He was looking for a group of players who worked well together “because no group has ever been able to beat me as a DM.” Uh … No. That’s not what D&D means to me. It means weird. It means strange. It means fun with friends. It’s not a competitive game with sides. I’m not even sure the old TSR tournament modules were that competitive; they didn’t seem like killer dungeons. Tomb is a killer dungeon. It seems a little competitive. This module is SUPER competitive, to the point it feels like the designer hates his players. It doesn’t feel tough it just feels … I don’t know… antagonistic? unfriendly?

There’s about five and a half pages of background and introduction at the start of this adventure. ‘Long introduction’ is one of the things that I’ve found generally means a product has problems. The designer feels the need to lay EVERYTHING out and explain the backgrounds of everyone. No exception here. We get the history of the temple, from the ancient past to the recent days, almost none of which is relevant to the party and their adventurers. The hooks are pretty poor i relation to the adventure. The suggestions are that the party is contacted by a cleric to look for his friends, lost in the temple dungeon, or an injured adventurer who wants the party to bring back the bodies of his fallen comrades in the dungeon. Those would be fine, if generic, hooks for a normal murder-hobo run but in this case they are disingenuous. The actual point here is for the party to SAVE THE WORLD. Yes, the party is meant to discover that somehow the mess in the dungeon is leading to the end of the world and they need to kill everything in sight in order to save it. But that’s not the frame of mind the party is going to be in. They are going to be in some other mode: find the clerics, find the bodies, or maybe find the big booty elf chicks and bags of gold. When all of the super-obscure clues start to pop up it’s very unlikely that the players going to be bothered working through the clues and riddles to figure out that the world is ending and what they need to do to save it. I did find one part of the intro interesting: there was once a giant demonic statue in the forest, in the middle of nowhere. It has recently disappeared, replaced by a large hole in the ground … That’s a nice dungeon entrance.

The dungeon has three levels and about 66 rooms. The final level is really just a throw away with four rooms in a straight line though, so that one doesn’t really count. Levels one and two have some very simplistic maps. They are really nothing more than a kind of branching star arrangement. Work your way all the way down one leg and then backtrack to work your way down the other leg. Repeat until your players get phone calls (their phones were on vibrate) from their waves summoning them home to [insert excuse.] This is a common occurrence with temple maps. They seem to have a kind of symmetrical nature built in for some reason. It’s pretty boring in play, I find. I’d prefer a map with some loops and so on so that the party can skip past encounters, or get ambushed by monsters or head ’em off at the pass, and so on. This sort of exploratory play helps develop a much deeper feeling of mystery and the unknown, in my opinion. When you know where a road goes the magic of where it MIGHT go is no longer present. There are no wandering monsters
and only one way down to the second levels and one way down to the third level. DO WHAT THE DESIGNER WANTS YOU SILLY PLAYERS!

The encounters and rooms are the real heart of my problems with this. First, the place is SUPER EVIL so clerics get a -6 to their turn rolls. If you have to gimp the players to challenge them then maybe you should rethink your encounters? Why not just make the undead special? Why force the party to kill the thing? The dungeon is full of explanations and other silly things. Continual light sconces, walls invulnerable to all but a wish spell, and so on. The rooms generally have some combination of obscure riddles, stasis monsters, and death traps in them. Iron golems, stone golems, illusion black puddings, stasis stone giants, stasis frost giants, and a few undead/demons/devils. This is combined with doors slamming shut when the party enters the room, symbols of death, etc. It’s not the death traps that are the issue but rather the relentless, arbitrary, and boring way in which they are presented. Die in a round. Die in 2 rounds. “The doors slam shut. If anyone so much as touches …” Touch the alter and get disintegrated. This is a hell of a place to be an apprentice! This is combined with inscriptions to relate (obscure) clues to the party. And it’s all combined with a meticulous descriptive style that includes lots of boxed text and lots of descriptions for the DM. What the rooms was used for. Was the room originally contained. What it contains now. Why the creature is here. What the creature had for lunch. This is way too much detail. It makes picking out the important parts of the room much more difficult. There is a particular style of D&D at play here (beyond the antagonistic nature) that I dislike: the ‘magical society’. Everything has to have a reason and everything has to obey the law. Light? Continual flame sconces. Acid trap? That’s a reason to go in to great detail on the how, why, and wherefore of the trap. Magic mouths explain things. Food gardens and fresh water sources. I don’t think I saw toilets or sphere of annihilation garbage disposals but I may have missed them. This sort of things wears on me to no end.

The module is an excuse to toss a bunch of death traps and monsters at a party. It doesn’t do it very well, repeating tropes from other works by the designer like negatives to turn, doors that slam shut, and monsters in stasis. I’m passing on this one.