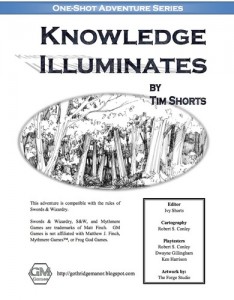 This is a short little adventure meant to completed in one night. It has a small wilderness area and a small eleven room dungeon. It has some decent encounters but feels bland. It doesn’t suck, there’s just not enough to it.

The idea is that there’s an old wizards workshop out in the wilderness. The players will wander around the wilderness having adventure until they find the workshop. Unfortunately, in order to get there we have to suffer through three pages of introductory text. Descriptions of Gods, descriptions of some kind of secret do-gooder society, descriptions of demons, the history of the wizard and his workshop. There is way, way too much of this stuff. Highly detailed backgrounds and exposition are nearly always wasted space in an adventure and this is no exception. Almost none of the information is needed to run the adventure; it’s just fluff, feels like padding, and gets in the way. The worst part of this is the hooks. They suck. You can track a strange creature you see. You can investigate the disappearance of a tinker. You can go on a mission for the Do-Gooder society. You can hunt bandits for villagers. You can learn of the lab from older mages who remember it. These are piss poor hooks that do nothing to get the players excited about going on the adventure. The hook needs to motivate and these do not. They amount to fantasy rationalizations, and I hate the rational in my Fantasy RPG’s.

The wilderness crawl takes place on a map that’s maybe 10 hexes by 10 hexes, each hex being a 1/4 mile. Road, stream, forests, and a couple of hills contain seven locations to discover. The encounters are pretty good ones. An ankheg living in a giant skull with the remains of victims in it. A hangmans tree. Bandits with some personality, etc. All of these have some little detail to make the encounter more interesting. The writing style is very conversational and that makes all of these encounters take up more space then they should. There’s s a statue encounter that takes up three paragraphs because we have to be told all about it … gamewise there’s a silver clasp hidden in the base. I was a bit surprised to not see a wandering monster chart. Having the players wander all over the map looking for the wizards lair is going to take some time and that time is traditionally filled with wandering monsters.

The wizards lab is a short little eleven room affair. It’s very very linear. Rooms 4-11 are all in a row: come in one door and go out the other. Further, there are no real creature encounters past room six, leaving the second half of the lab a little anti-climactic. There are a couple of traps, pits and poison gas, and a couple of decent little encounters. Ghouls who gnawed their arms off to escape from manacles. A ghostly shadow next to his body in a magic pond. Two creatures arguing over an item. There are occasional bursts of good imagery. For example, skeletal bodies still grasp the handles of the chest they were carrying when they died. Otherwise … lots of bits of disparate and, IMHO, irrelevant, information, especially in the rooms in the back half of the lab.

There are a few standouts in the adventure. Arrows of Fireball are a new magic item. I like these sorts of twists on standard magic items. Err, or maybe I should say that standard magic items are boring and should never be used, especially in an adventure module where I’m paying for creativity. There’s also some flowers that can bump up the effectiveness of healing potions. This is a nice little way to get the players carting around ingredients and getting them more interested in the non-traditional and i like it. A portion of the adventure revolves around Viz, little magical pellets that a wizard can use to cast spells without using a slot. There’s A LOT of viz in this adventure. In fact, there’s a pool that it can be harvested from. I like the idea, it sort of acts like a scroll for a spell you’ve already got memorized, but there’s WAY too much in this adventure. That’s pretty easily remedied though.

So, it’s linear, missing a few things, and a bit bland in places. It’s meant to be an introductory adventure but I’d rather have a really kick-ass introductory to get the players genuinely excited about the game, and I don’t see that happening with this. Still, it’s better than most published adventures.