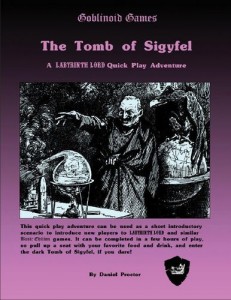 Legends of the dark-hearted sorcerer Sigydel around in the local town, despite the fact that he has been dead for centuries. His evil exploits are the topic for many late night fireside stories, and to this day the townspeople often paint a red eye above their doors to ward off Sigyfel’s evil spirit …

Different standards for free products?! BAH! This is a small tomb with 10 rooms that just about fits the profile of a one-page dungeon .. except it’s three including cover page and OGL.

A dead body has turned up on the road, it’s face frozen in terror, and the party is expected to investigate on their own, or get hired by the mayor for 300gp to investigate. That’s a pretty bland hook for what, I assume, is a product intended to get people excited about Labyrinth Lord. I generally find that motivating the PLAYERS rather the CHARACTERS is the key to getting things off to a good start. Sometimes you can do this with a decent bit of fire & torture on the villains part and sometimes you can do it by dropping some !!SERIOUS L00T!! rumors in town. I recall one group following a drunk farmer out of the tavern, confronting him, and then chasing him when he ran off. They shot him in the leg with a crossbow and *ahem* applied pressure, in order to learn more about the !!SERIOUS L00T!! he implied was nearby. Now THAT’S a group of motivated players!

The only wandering table is for the countryside on the way to the tomb. Wanderers only show up in the wilderness. And at night. And you only roll once. And they only show up on a roll of ‘1’ on a d6. Uh … it strikes me that the inclusion of a wandering table may not have been warranted. The dungeon has ten rooms. There’s an entry hallway that divides in to three corridors. The dungeon has two traps, neither of which is likely to be avoided, and three monster encounters. Skeletons, Orcs & an evil cleric, and a ghoul. Each room has a 2-3 sentence description which is just about as generic as the hook. There’s absolutely nothing here of interest. It’s just about an unimaginative of an adventure as you can possible generate. “The doors to this room are locked and it’s full of wooden debris.” or maybe “the room has rotted silks and tapestries and a table with a box on it.” I like a terse description but I DO expect the text to provide a bit of inspiration. There’s nothing inspiring here at all. It’s a static place with generic monsters just sitting around in their generic rooms waiting for the party to kill them. At least there’s no plot.

This is meant to be a kind of introductory product. Giant stone ape heads shooting red disintegration beams out of their eyes, and brains in jars that grow tentacles, and reprobate wizards … that’s the kind of stuff that make D&D a game of legends and stories. Not an empty dusty room.

3 Responses to The Tomb of Sigyfel