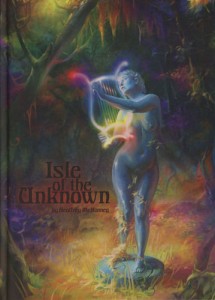 by Geoffrey McKinney
for Lamentations of the Flame Princess
LotFP/D&D
Wilderness Hex Crawl
This is a hex crawl. AFAIK, there are only two extensive examples of hex crawls: The Wilderlands series and Staters NOD/Hex Crawl Classics line. It’s inevitable that any hex crawl will be compared to these, especially Wilderlands. I love hex crawls for their adventure seeds and I was struck by just how different I found Isle of the Unknown to be from Wilderlands and Stater. I like a lot of the ideas that Geoffrey produces … but I didn’t find Isle to be very useful.

There’s a definite OD&D vibe in Isle that I can get in to, but it is overshadowed somewhat by the formulaic entries. Two types, in particular, stick out and are what got me thinking about other hex crawls in comparison. There are giant hybrid monsters on the Isle as well as magic-users. Individually these encounters suffer from what I’m going to talk about later, but taken together they get formulaic. “Oh, gee. look, another giant hybrid monster. Ho hum.” A giant four-legged eagle who’s body is covered in feather faces. An 8′ tall humanoid swan with three human faces on its chest. A 240# giant mantis walking on its hind legs. A 4-legged pigeon the size of a large dinosaur. The book is relentless in the appearance of giant animal hybrids. They get a little “all the same” after awhile. Hmmm, or maybe “anticipated and therefore boring.” is a better way to describe it. Also along for the ride are the magic-users. Basically, a random person you run in to is a magic-user with weird powers, and probably some animal buddies. It seems like there are A LOT of these guys. I like a good OD&D magic-user but between them, the giant animal hybrids, and the statues things get REALLY repetitive.

What I’d really like to talk about though is the way the various hexes/encounters are presented in Isle. Here’s a typical entry from three hex crawls: Isle of the Unknown, Wilderlands of High Fantasy, and Staters HCC1 – Valley of the Hawks.

Isle: “Orchids grow from the rumps of squirrels, rabbits, chipmunks, etc that are prolific in these woods.”
Isle: “A 6′ tall wolf-man slithers on the ground, moving with its arms. It has antlers on its head.”
Isle: “A 7′ long caterpillar has skin made of metal. It can crawls on the walls and ceilings as easily as the ground.”

Wild: “Abode of four huge ogres which relish human flesh. Every ogre has 3 eyes and flaming hair. A pet giant crocodile follows them to feast on their leavings.”
Wild: “3 Harpies harass 12 dwarves on this rocky land fall. Unknown to all except 1, a yawning cave is the treasure trove of pirate. 3 chests are guarded by 4 skeletons.”
Wild: “A blackened Great Keep whose roof has caved-in and the gates have rotted down, provide shelter for four giant pigs.”

HCC1: “There are a number of tall conical spires here topped by large balancing stones. If the stones are removed then thousands of mechanical locusts will pour from the spires and descend on the Valley, making it a wasteland until stopped.”
HCC1: “An old, grey horse wanders this area, grazing on the grasses and accompanied by twenty zombies in leather harnesses and carrying barbed spears. The zombies were under the command of the necromancer Bethnay, whose body is still dragged by the horse after a fall cracked open her skull. The zombies accompany their mute master, waiting for new orders. The remains of Bethnay still hold a treasure map in one boot.”
HCC1: A small village of ancient men in his hex is plagued by pixies. The woodsmen live in leather tents surrounded by a thicket. They are tall and thin, with golden skin, reddish-brown hair and long noses. The men are bison riders, capable of communicating with and controlling not only their bisons but all mammals. They wield throwing clubs called knobkerries and long, serrated daggers and wear leather armor.
Stater is certainly a bit longer, but not nearly 3.x “we pay by the word” length. Ignoring length, the HCC hexes give you a decent little encounter to flesh out and its readily apparent what’s going on. There’s something strange in the hex and there’s something strange going on with it. Wilderlands has decent little setups also. The harpies and dwarves encounter is a good example. There’s enough information there to flesh out and run an encounter. “There’s an X here and Y is going on.” The Isle examples are different though. They name something, and do little more. “There is a book in this hex.” or something similar. There’s something missing. The description needs more to turn it from being a THING and in to the basics of an encounter.

Oh, and while it’s gouche to do so in another mans review, I encourage folks to check out Staters Land of Nod (Lulu print and PDF) and Hex Crawl Classics (Frog God Games print and PDF) lines. He’s one of the best producing work today, and also one of the less visible.