Tower of the Stargazer 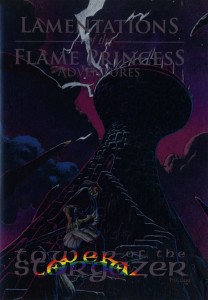 Legends tell of a wizard so arrogant that he felt the entire sky was naught but a lens for him to view the stars. So great was the hubris and defiance of this man that the gods smote him with the power of storm and fire. Oh did the wizard laugh at such a pathetic gesture. He did not fear the gods, for he drew his knowledge from something greater. Something darker The legend of this wizard grew, first whispered by men in fear, and later in awe. The wizard, they said, attacked the gods just as they had attacked him. And his joy only grew as the land around him died. But then there was no more news. No more talk. Something had finally brought the wizard low, for though the sky still blazed down on him and his abode, he no longer blazed back. And now you’re going to walk right through this wizard’s front door.

Stargazer is very good and can be very deadly, in spite of the low creature count. It’s one of my favorite modules to run at cons. Unlike most of what I review, I HAVE run this. About 20 times.

The module is in digest format and sometimes manages to squeeze three entries to page. Raggi does like to fill a room with words, ad there’s a little bit of this that goes on in the module. Unlike many 3.x modules though it doesn’t feel TOO excessive. Many 3.x modules feel like they are being padded in order to exploit a ‘cents per word’ payment rate by the publisher. In this product though it feels lie it’s genuine excitement over the room and setting. The module is also meant to be a kind of introductory work and thus there are some extensive notes in certain areas. These are a kind of combination designers notes and advice to the DM; advice both on how to run the room and the design behind it, in order to guide a new DM and help them run better games in the future. I LOVE designers notes and don’t really have too much of a problem with them being integrated in to the main text. The advice also does a decent job of conveying the feel the designer is going for. Most games are shooting for a certain feel and it can frequently be difficult to figure out what that feel is. This helps.

Stargazer only has about 26 rooms, spread out over the seven levels of a wizards tower. Each level only has three of four encounters in it however it manages to deliver a good Exploration feeling, the kind that’s very rare in a setting with so few rooms. It does this primarily through two mechanisms. First, it’s the tower of a reprobate wizard, and thus there are many strange, bizarre, and weird things in it. This does an excellent job of setting the mood of the various rooms. Secondly, there are multiple ways around many of the levels. Three of the levels are only accessible through a levitating platform, and two of the levels are NOT accessible through that platform. Three levels also have no stair access while two levels only have stair access and two levels are connected by multiple ‘stairs’ and have areas not accessible by the other stairway. This map complexity to some decent Exploration elements in the tower, which, combined with the atmosphere, leads to the players not quite knowing what’s around the next corner, even when it’s obvious there is no next corner. Eventually though this leads to “find the missing room” syndrome, which is not necessarily a bad thing. The players get to experience both the mystery of the tower AND have a mostly-satisified feeling of having explored everything.

This being Raggi-land, the module is short on opponents and full on weird and death-traps. There is not, though, a feeling that the traps are arbitrary or unfair. Carry a ten-foot pole though a lightning field and take your chances. Go through the eighteen steps required to use the telescope and suffer the consequences. Perhaps the only borderline example is the front-door, but even then it can serve as a good example of how old-school play proceeds and it certainly sets the stage for what is to follow. I don’t have problem with it since I use this frequently in con games with a boat-load of pre-gens available as replacement characters.

There is a SHIT-ton of stuff to play with in this adventure. Lots of stuff to drink, or to open, or to mess with. Some good, some bad, and almost all of it weird. I LOVE this kind of stuff and this is what OD&D means to me. It’s the weird and strange and its use to invoke a sense of mystery in the players. There’s absolutely no telling what some of this stuff will do. This instills a kind of apprehension in the players and keeps them off balance. It’s terribly hard to min-max things through the rules when encountering the weird and non-standard. Almost every room has something interesting in it. I particularly like the crate room, the anatomy room and the wizards room. The wizards room, in particular, provides an enormous amount of fun in running, both for the players and the DM, in my experiences. The players generally think they are getting one over on the DM and the wizard is A LOT of fun to role-play. I only recall there being five monsters in the module, two which are NICELY bizarre and two of which are classics. It’s not a combat-heavy affair.

The only criticism I have is that it can sometimes be a bit slow. Most of the combat encounters are clustered in the same area. This can lead the rest of the tower to feel a little slow.

I like this module a lot. I keep it in my “quick-start” kit, along with Death Frost Doom, Tomb of the Iron God, and Shadowbrook manor. Those four choices, along with a pad of graph paper, a big stack of 1st-level pre-gens, the magenta D&D basic book, and dice-pencils make for a PERFECT “zero effort” D&D kit. This module, along with that kit, makes it possible to play D&D IMMEDIATELY. Anything that lets you play more D&D is a good thing.

10 Responses to Tower of the Stargazer