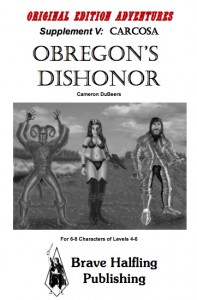 THERE’S NO PLACE THEY AREN’T A LITTLE BIT PURPLE! South of the Thaggasoth Peaks lies the mining town of Jaftgong. It is a rough place to spend time, a mining town with slaves and freemen alike toiling to extract rubies from inside the mountains. You and your team of adventurers like this place, there is no itch that cannot be scratched in this thriving community that is growing too fast for its own good. Your purses have emptied and your lusts are sated-for the moment. Now the time has come to make some gold and maybe bust a few heads in the process, and you have begun looking for work. A purple woman has been frequenting the roughest tavern in town, looking for a group of men and women who know how to use a sword. Oh, yeah. There is just one thing you ought to know about her …”

As I type this I am a bit misty eyed. I’m on a long ass plane ride to San Francisco and this is my second module review in a row on the plane. The first was Larm, a pretty forgettable product. The second is this one, an OD&D product that uses Carcosa. The differences couldn’t be more striking and I am reminded once again of the joys of the OD&D style. And for what it’s worth: the vile parts of Carcosa don’t show up.

This thing comes in two parts: a dungeon adventure to retrieve an artifact and a short couple of pages to describe the adventure/actions that happen next. The dungeon, with map, is only about 9 pages and about 25% of the product. The follow-up with only a couple of pages more. What’s the rest? I’m not sure I can completely tell you … a glorious glorious mess? Not in a Judges Guild way, but more in a : I’m going to go on and on about the adventure setup up and include a bunch of support materials. I Love it ! Ok, so, I normally hate super long intros, but this is Carcosa so it’s fascinating to see the alien culture. It doesn’t quite come off as gonzo and alien as ASE1 … uh until the tech starts showing up.

A Champion of Law got in a big battle years ago, kind of won, but had his soul sucked off to the nether realms. Years later his second in command receives a vision form him and sets out to save his soul but to do this she needs to retrieve an artifact from a nearby abandoned monastery and and then go do a ritual on the old battlefield with the blood of someone who loved him. Her blood. She hires the party to help her.

Imagine a conservative sundowner town in some conservative place, say in Ohio. Picket fences, etc. Now imagine they discover rubies right outside of town and it turns in to some Deadwood style boomtown. This is the town that the party is in and get hire from . There is some pretty seething racism in Carcosa, and the boomtown nature is forcing it to the surface as the diverse miners try to coexist with the conservative green man town. This isn’t really explored but what there is does provide the DM some fodder for setting up some encounters in town.

Room one of the dungeon has 40 morlock-like creatures in it. Room two has 128 giants ants, with more appearing every round until 1000 show up. Oh, D&D, how I love thee! (Get it?! Get it!?) How can you not like something like this? Screw you and your lame ass story, the story is getting created right here and right now by the players as they face off against the crazy shit IN THE FIRST TWO ROOMS! It’s sometimes a little hard to pick out the monsters in the rooms, but they range from skeletons and centipedes to a group of mummies looking for the same things the party is. What?!! Yup, and they are not immediately hostile either. This is great! I love it when the party can talk to intelligent creatures in a dungeon, and I love rival adventuring parties in a dungeon; both really mix things up for the party and give them breaks from a pure on hack fest. Making them mummies, with actual names and professions, make the encounter even more gonzo and therefore totally more awesome. If you don’t like this kind of stuff then you have no soul. The map is great. Not really symmetrical, multiple doors in to the same room, multiple hallways and lots of loops. This gives the party lots of options when exploring, allows them to potentially bypass encounters with careful play, set up ambushes … and allows the monsters to do exactly the same thing to the party! It’s one of the better maps I’ve seen in this regard.

Eventually the party will find the McGuffin and go to the battle plain to do the ritual. It;s at this point that their employer will discover her mistake: that lawful guy was actually Chaotic! She shows up through the portal, with a very powerful chaos creature in tow, screaming like a madman that he’s about to summon all the Great Old Ones. Oh yeah, and you know that guy he was battling originally? Well their employer gets a message that he’s on his way to the boomtown with an army to sack it. Moral Dilemma time: Save the townspeople, who are in danger RIGHT NOW and let he crazy guy go, or chase the crazy guy and stop him from summoning Cthulhu, etc, accepting that the town is about to be mostly massacred as it, and its mines, are taken over? Notes are given for both of those options, as well as “the party just leaves” and “the party splits up.” On a very interesting note, the module gives the order of battle for the town conflict, including suggestions on how to model the parties involvement (additional recruits, better morale, etc) and suggests a mass combat system for those inclined to run the battle that way.

This being Carcosa, there are no real magic items, just a variety of tech items. The mundane treasure ranges from moderately interesting (jeweled dagger with emerald inlaid pommel) to boring (400 of jewels.) The new creatures are also a bit of a let down. There are two spawn of The Shub but both are essentially just humanoids with no unusual attacks or defenses. That makes me sad; I would have liked to have seem some more strangeness. The wandering tables do include a motley assortment of the denizens of Carcosa which appreciate.

Its OD&D. It’s Carcosa. It’s light on the vile and heavyish on the tech, with a nice moral quandary thrown in. The parties actions, either way, have consequences. It’s good and I don’t think I’ve done a very good job communicating that.