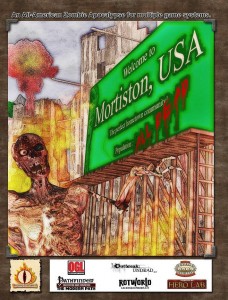 by Mark Cookman
for Scrying Eye Games
Multiple Systems
I’m reviewing this out of order, and out of genre, because it’s soooo good. While at Origins I saw a postcard on the tables near registration that was advertising this. It looked neat but I promptly forgot about it. Later when I was wandering the dealer hall I stumbled upon it at a booth I wouldn’t normally visit (bad me! BAD!) that looked to be selling maps. Picking it up to thumb through it I could tell immediately that this book was something special. Further reading confirmed that initial impression. This is one of the best books published recently for ANY rpg. It describes the town of Mortiston during a modern day zombie apocalypse. And it does it in a way that is complete and yet easy to use.

The book is roughly divided in to six sections, roughly, with some commentary and filler scattered throughout. First we have the personalities. There are 19 or 20 core NPC’s described in the book, one per page, with about half the page being three of four paragraphs on their personality and history and the other half being stats for the five systems the book supports, along with some typical equipment. Any good fantasy village revolves around the NPC’s and heir personalities and this book truly gets it. The various descriptions do an excellent job painting a picture of the person and their personality without railroading the GM down a path. You truly get a sense of who these people are and how they would/will react to various situations. In addition the various folks tend to have strong personalities: people they like, people they dislike, preferences, and strong quirks. Some of them skate a very fine line between being over the top but they all break short of that line, in my opinion. In fact, I’d say they fit perfectly next to that line. This is, after all, an RPG in which we’re all trying to have fun to having some strong and non-bland personalities is virtually a requirement. We’re not talking People of Pembrocktonshire levels of strange, but someplace just short of that. You’re going to find criminals of various type, from hugs to masterminds, and heroes from those duty bound to those who morally do the right thing (for various different reasons) to the hangers on and normal people. These are all well developed people with motivations for what they do that make sense. Each one also has a brief section that lets you know where are during the various portions of the outbreak timeline.

The timelines are GREAT! There are two major ones. The first is a detailed timeline, almost minute by minute in some cases, of the first day of the zombie outbreak. This timeline takes place over four pages. There are a few incidents before 11:00am that provide some great atmosphere for the day to come, and then at 11:00am all hell breaks loose. And continues to. At work I’m fond of saying that any idiot can fix one problem. It’s when TWO problems happen simultaneously that things break down. Well, Mortiston has A LOT of problems that first day. We get a full list of major events and what our 20 NPC’s are doing throughout the day: where they go and what they do. At the back of the book is a two page timeline that covers details over the first 111 pages of the outbreak; with a focus on major events and ‘programmed’ deaths. IE: It’s two pages of plot hooks for the characters to play with. For example, the last entry is “Cadet T from the Gaiten Academy is on a mounted patrol and is ambushed by Z’s and breaks his leg. Lacking a trained doctor he dies of internal injuries on day Z+129.” If that’s not a plot hook I don’t know what is! And by this time the party is going to have an emotional attachment to these NPC’s, like Cadet T, and, more importantly, they are going to be in a certain mindset. Too many times an adventure introduces a loved one or NPC only to have them threatened and/or kidnapped as a plot hook for the adventure. This happens so much that some players will never involve themselves with people in order to save themselves the trouble. But in this supplement the characters already know the trouble “Z Day”, and they are going to spend the first 111 days getting to know Cadet T and know that he can take care of himself, can be relied upon to help, and is a force unto himself. The plot putting him danger doesn’t happen right away and because of that the party will have a deeper motivation with regard to him. And that’s just one example from the timelines. I LOVE these things. It’s built in action for the party to interact with while trying to survive the Z’s!

There are 29 developed locations described, each getting one page of text. There’s a paragraph or so on the locations background and history and then three of so paragraphs on the physical description of the location: it’s layout, dimensions, building materials (Z ‘s on the loose, after all) and so on. There’s also a section on resources. This details what kind of goods can be found at the site, both mundane and anything special. This is further supplemented by rough timeline that indicates the degree of looting of the site that takes place. Great! A real sense of time and events passing! Then there are a couple of sections that describe the people present. Who they are, what they are doing, when they are present and when they leave and when they change locations. This is supplemented by a brief chart that shows how the owners/occupiers/etc relate to the other groups in town. This ranges from ‘Foe’ through ‘Cold’ and ‘Neutral’ to ‘Warn’ and ‘Friendly.’ With just a quick glance the GM can help orient the NPC”s towards the party and anyone accompanying them.

Factions my friends! That means factions! It should be clear by now almost all modern interpretations of Zombies use them as a sideline and motivator for other action taking place. In the video game Left for Dead they are the speed bumps that distract you while the special infected attack. In several various movies (28 Days later) Tv shows and comics (Walking Dead, etc) they zombies are basically red herring; the real action is what the characters are forced to do and how they struggle with it internally and between themselves. Factions and NPC’s make the world go round. There are roughly eight factions present in town who all feel differently about each other and are described in a coupe of pages near the back of the book. These range from the former powers (sheriff, mayor, etc) to a motorcycle gang, a group of orphans, organized criminals creating a crime/slave society, roving ‘good’ warriors, a military academy, the guys at the radio station, and the local religious looney. Each one gets a couple of paragraphs describing them, their motivations, their leaders and members, how they feel about others, etc. In addition to all of this we also get plenty of other smaller groups scattered throughout the text. The local native american tribe. The loggers. The ‘historic’ and affluent district. This place is CRAWLING with factions, and therefore plot hooks and NPC interactions … all with a healthy dose of Z’s.

Finally there’s a section in the page, six pages or so, that describe major things for the gamemaster. The state of water, electricity, cells, etc over the timeline. There’s also a set of tables that describe he various sections of town, their flavor, and what kind of stores you can find there, apart from the major locations that get their own full page descriptions. There is a LOT for the GM to work with provided by the section. This place is absolutely insane. I usually don’t give a shit about providing spoilers, but I’m going to hold back this time. There is SO much going on that’s absolutely WONDERFUL and I don’t want to ruin your first read through of that section of the book.

Those of you that follow my blog know that I have some pretty high standards. Well, this booklet is just about perfect. I can’t find any fault with it at all. If you have any interest at all in modern settings, zombies, or post-apoc play then you should pick it up. Even if you don’t you should pick it up; it will inspire you and the authors/publishers deserve to be rewarded for producing such a fine book. It’s a perfect example on how to create a living breathing environment. Strong NPC’s, lots of factions and relationships, and lots of potential plot hooks. It provides a wealth of detail without being burdensome and remaining easy to use.

This is available at DriveThru.https://www.drivethrurpg.com/product/102906/Welcome-to-Mortiston-USA-An-AllAmerican-Zombie-Apocalypse?affiliate_id=1892600