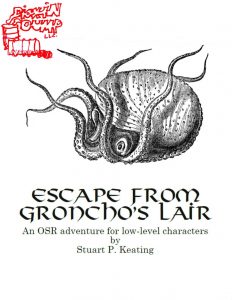 Most adventures involve getting to the absolute bottom of a dungeon, blithely swinging hammers and swords through warriors and civilians, pillaging and looting along the way.This adventure inverts the traditional model: The adventurers easily run through a surprisingly unpopulated goblin warren and then get struck with amnesia at the very bottom. They know their identities, skills and class abilities but have no idea what’s happened over the past several days.

This is a 16 page, thirty room reverse dungeon crawl in goblin caves. You start at the bottom and make your way out, having suffered from limited short-term amnesia. IE: you can remember who you are, you just can’t remember your dungeon crawl to this point. It’s got a good mix of encounter types and a decent variety of topical dungeoncrawl humor that everyone should get a kick out of. It can be hit or miss at time with the descriptions, and the font selections make readability suffer A LOT. I like it, but I dread actually trying to use it, because of the readability issues, if you get what I mean.

The party starts out in one of the last rooms. In a room with a chest, a dead person, fried & still smoking, laying in front of a chest. Everyone knows who they are, but the memory of the last couple of hours no longer exists in their minds, evidently the results of the trapped chest. It’s a nice little in medias res start to the adventure that glosses over all of the rumors, rewards, backstory, why we adventure together, and everything else. You’re in the dungeon. Go!

The encounters here are a decent variety. There are a few straight up combats and more than a few more with cowering goblins or even goblins who are willing to talk and/or goblins who are willing to join up with you. The variety here is much more than in the usual dungeoncrawl and gives it that factions feel and adds that element of negotiation and diplomacy that most non-faction dungeons lack. To compliment this faction play is a decent variety of weirdness, things to screw around with, traps, and even some little set-piece like encounters … usually something to do with terrified goblins trying to protect and respond to the “Reavers” that have invaded. All the while the party is confronted with the results of of the typical dungeoncrawl: bodies, death, destruction, well-looted rooms, cowering women & children. It adds a nice touch of lightheartedness without going for over the top humor. A statue to fuck with, a dead dwarf body that could be a boon or bane. Nice little touches. There’s enough variety that things don’t get monotonous in one direction (combat) or the other (another empty room.) It’s really a positive example of design from that standpoint. (And cheap, so easy to check out.)

The primary negative is that the thing is impossible to read. I don’t bitch much about this sort of thing, but this is a bad bad example. It’s some combination of the font size, margins, font weight, mixture of italics and standards text …  the whole thing just combines to wash all together in a head dizzying spin. I know this is petty, but if it gives me a headache to read and it’s hard to find things in the text then it’s hard to use at the table. It can also be … mechanically? lengthy at times. The descriptions, proper, don’t seem to run on too much and are at times quite short. This contrasts to the DM notes which can be long because of the mechanics presented. Mechanics? DM notes? I’m not sure what to call it. Some rooms can be a column long because of this. Further, some details are buried in this DM text, forcing you to be familiar or pick out the text at a glance … which is hard to do because it’s buried further down and/or the font/italics/text issues.
There’s also this tendency to abstract. Here the entry for room 21, the Pantry: “Suprmeley foul food closet. No real treasure to speak of, unless you’re into rotting carcasses and garbage. Roll on the encounter table.” That’s not terrible and you get the idea, but it’s also abstracted. It tells you it is grody (a conclusion) instead of describing it and letting you make the determination. (Although  “if you’re into rotting carcasses and garbage” is pretty close, it’s still an abstraction.)

It’s also got some mechanical issues with descriptions. This is something that I’ve only ever seen one or two other adventures do. There are critical details missing in places. The last encounter has the party leaving the cave complex and being confronted by the boss outside, with his giant boar,  2 mercenaries, and a line of crossbowmen. How many crossbowmen? We’re never told. Further, the encounter implies, later down in the description, that there may be captives outside in the mix also … but it’s not very clear. Oh, and the treasure descriptions suck ass, just boring old mundane stuff.

It’s got a good design it just suffers from the ability to communicate that creativity to the DM in the most effective manner. This is something I’d love to run and think everyone would have a great time … it would just be a pain to run from the existing text.

2 Responses to Escape from Groncho’s Lair