T1 – The Thing in the Valley – Pacesetter Games & Simulations 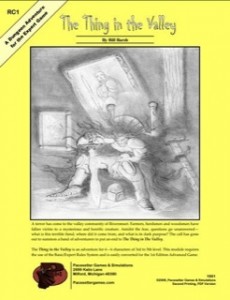 I made a lot of old school purchases at GenCon. Just like in the D20 days, a lot of material for OSR is being produced that is of less than stellar quality. Occasionally though I stumble across something that is good, and this is one of those times. At it’s core the module is fairly simple. Something is haunting the valley and the villagers would like the PCs to investigate. There’s a brief wilderness jaunt/search until the party finds the lair. The lair is explored and the baddie dealt with. Fairly standard stuff, but made wonderful by the evocative nature of the encounters Bill Barsh scatters throughout.
First up we have the village. This will most likely be the first stop for the party. The village isn’t really detailed, just the encounter in the local tavern where the villagers implore the party for help. This section is short, just about a single column, but it sets the tone for the entire adventure. The villagers packed in to the old tavern, their faces etched with fear. An old crone by the fire. A nervous villager acting as the spokesman. It’s presented as read-aloud boxed text but can quite easily be broken up for more free-form use. The text itself is very descriptive and yet brief. It perfectly paints the picture of a group of relatively isolated villagers gripped by fear. At the same time the individual personalities of the villagers shine through. The tale they tell is one of uncertainty, horror, and desperation. There’s about a page more of additional information in unboxed format. Again, it is very well done. The very brief descriptions of the NPC’s, just a sentence or two, brings them to life AND provides ample resources for the PC’s if they follow up. For example: “the old woman will give her ring to the most outwardly brave of the PC’s. Also, it is a gift and she will not ask for it back at the conclusion of the adventure. if the PC’s try to haggle for a reward (none is offered) she will not offer the ring.” That’s the entirety of her text; it communicates a lot and gives the DM a lot to work with in bringing the encounter to life. And that’s just one example of many I could have pulled. It’s done VERY well and sets the feeling for what’s to come, both in mood for the PC’s and in flavor for the DM to impart.
There’s an overland wilderness portion to the adventure, essentially a hunt for The Thing. The valley is about 13 miles wide and 30 deep and has 8 keyed encounters in it as well as three events for the DM to throw in. Two of the events are mostly role-playing events while the third has the party being assaulted by bandits while they hole up in an abandoned farmhouse in the driving rain. Events usually mean “railroad” however in this case the first two events can easily NOT lead to combat (they are not combat by default) and the third provides some clues that it is coming. In any event, none of the events are required for the adventure and are more of the “wandering flavor text” variety. They are, however, VERY well done. The NPC’s descriptions and the setups are very well done and interesting and provide memorable encounters. There’s also a small wandering table. I’m happy to see no humanoids on it (Trolls & Ogres don’t count in my book.) I’m happy to see that the wanderers match the flavor of the adventure rather than “here’s some random goblins and orcs to fight.”
The keyed encounters in the valley are interesting as well. They involve about a column or so of text each and do a good job in that small space of describing the encounter and making it something that fits with the adventure and provides something memorable for the characters to do/explore. There’s only one unavoidable fight in the keyed encounters, and that’s directly related to the adventure. It’s also done in a very spooky way that, with a modicum of DM effort, should get the party nice & creeped out.
The final location is a ‘haunted house’ where The Thing dwells. It’s backstory is well done and the house has a nice variety of traps & tricks which fit with the overall feeling of the module and with them being in a house.  It reminds me a lot of that unknown feeling when exploring the Saltmarsh home, except I’d say this one is better done. It communicates well the creepy nature of the location and smart parties should be able to put the entire story together and get a leg up on the Thing.
I’m VERY happy with this module. It uses ‘standard’ monsters sparingly, has a set of new monsters for the party to figure out, and it’s ‘feel’ is communicated well throughout the entire piece. The entire module is built around a single monster, and, just like with the Harn Troll village/module, it’s a perfect way to illustrate how to do just that. This sort of well done work fires the imagination, which is exactly what I’m looking for in a module. It has about 30 pages and I’d rank it as a solid BUY. There’s a lot of dreck in the RPG module world; this is most certainly NOT one of them.
This is available at DriveThru.
https://www.drivethrurpg.com/product/167998/T12-The-Thing-in-the-Valley?affiliate_id=1892600