FGG1 – Fane of the Fallen 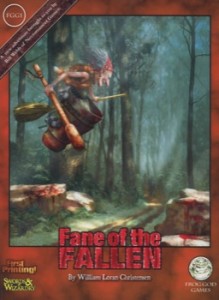 This is a large adventure that centers around a ‘new’ race and their attempt to free a powerful demon. While it is plot based it has a great deal of freedom associated with it. The various encounters tend to be very interesting and there are many non-combat options available.

It is a fairly universal truth that demon gods tend to be jerks. In ages past a race of demons betrayed a demon god and as a result had their demonhood stripped and were banished to the material plane. Recently a demon lord has promised to return their power to them. As a part of that plan the fallen demons are trying to free a powerful demon that was trapped in a magic axe by the forces of Law. To do this they need to steal a book, find the axe, and sacrifice over 700 innocent souls to the axe. Simple enough. Then the party shows up …

The adventure has two distinct parts. In the first the party probably is involved with a raid on a library near an inn they are staying at, followed up with an investigation in to why the humanoids raided a library. In the second part the party learns of the main plot and attempts to foil it. The core of the adventure is very simple: talk to some orcs, grab the axe, and then maybe kill the leader of the fallen demons. The extra detail available is what really sets this adventure apart. There are lots and lots of places to poke in to if the party doesn’t get on the railroad. This is the way I like to see these plot based adventures take shape. There’s a plot taking place and there are a lot of places between the party and the plot. Those places might have information, they might not. They might be friendly, or not. The party gets to poke around and take things at their own pace and get to decide how to proceed, where to go, and what to do.

As an example, there’s a trail through a forest. It passes next to/near a barrow mound. Does the party poke around? Side Trek! Another example revolves around a poor farm widow. Her only love left in life is her small daughter (everyone sees this coming right?) When the party passes by she rushes out of her house to give the party a freshly baked apple pie. No, sorry, just kidding. She rushes out to tell the party her daughter was snatched up by a giant bird earlier in the day and implores them to help. Thus starts a little side trek up the side of a mountain to the giant birds nest. Along the way the party may encounter a hippie yeti drum circle, a reticent stone giant tribe, and others. As with most of the encounters in this adventure, the various humanoids are not immediately hostile, have their own things going on, and may have some information for the party. They generally act like those sorts of humanoids might. The orc king doesn’t get too upset if the players kill some of his tribe if they offer a good explanation. “They annoyed me” is an explanation the king can understand. These encounters are BIG. 90+ yetis. 30+ stone giants. The lairs take several pages to describe and are full of quirky little things, mostly with the personalities of the inhabitants. And yet, these are mostly optional encounters. Oh, and the little girl has formed an attachment to the mommy roc and her chicks. Mom is getting a bit on in years and mistook the girl for a chick. Good luck gang!

Those sorts of things abound in this adventure. There is a pretty decent assortment of places for the party to poke in to and explore as they try to find the tracks. Most of them offer guidance on how to get back to the main adventure. And yet it doesn’t feel forced and these optional encounters add a lot of atmosphere and are dripping with good roleplaying opportunities and social interactions, between the players and between the NPC’s. There are only two areas that stick out as being issues. First, there are not really regional/area wilderness maps. There is a diagram or two, not to scale, with the general locations of the encounters noted on it. The text then says things “it will take two days to get to Farmer Ted’s house.” This is a bit unusual, IMHO. I probably don’t need the scaled maps … but I like them anyway. Secondly, there is one major location missing, that of the humanoids who actually raided the library. That MIGHT be an issue, although I suspect the players will ignore it given the large amount of other information that can easily pop up. On the plus side, there is some excellent advice sidebars for handling certain situations (How do we get 700 prisoners out of an evil city?) and some good notes on how various organized creatures respond to incursions in to their lairs/homes. I fee that this shows some serious playtest chops and corrections/additions made from those playtests. RPG players can be very imaginative but the degree to which tis module covers certain situations, without feeling forced, shows some pretty comprehensive thinking/playing of the adventure.

Earlier I described this as a plot-based adventure. I may be wrong in that. There are many locations, including a finale location, and the characters have some goals and discover some others. The fallen demons have their own agenda that they pursue regardless of the characters actions. Perhaps it would be more accurate to say that it’s laid out like a plot-based adventure however it is, at its heart, a set of locations for the party to explore/interact with.

This entry was posted in Level 9, No Regerts, Reviews. Bookmark the permalink.

1 Response to FGG1 – Fane of the Fallen