I1 – Grave of the Green Flame 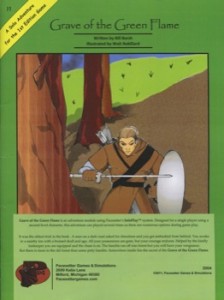 This is a solo module. It can be very tough in places. It has some editing problems. I have also played it more times than any other module I own, with the exception of Keep & Steading.

You are a lowly second level character. While traveling down the road you are ambushed by bandits! Waking up in an inn you find you have been looted. Oh the humanity! You are provided some sparse starting equipment and set off to bring justice to the bandits. The adventure is laid out in a format very similar to a Choose Your Own Adventure. The map is divided in to grids from A to GG. Each section is further divided numerically, A1, A2, A3 and so on.

The booklet has some issues with editing. Several of the paragraphs, especially in the later parts of the adventure, all refer to “paragraph X.” While normally this would be a Game Over condition for a Choose Your Own Adventure booklet, it’s not the case in this one. It’s pretty obvious form the map where the trail/path leads next so you just need to turn to that section. There was only the briefest of slight delay encountered during live play when this first popped up.

The adventure is a tough one. There’s a Shadow, encounters with multiple 1HD bandits, a double dose of killer frogs (they killed my kids, how … Moat House) a trio of zombies, and a 6th level wizard. These are going to be some very rough encounters for a 2nd level character flying solo. There are generally a nice variety of challenges presented: ranger tracking, thief sneaking and so forth. Some of the character classes and abilities will require a bit of on the fly adjudicating, none of which should be too tough. The adventure proper is a nice mix of elements. There’s a barrow mound, a crazed lizard man, ruined towers, bandit camps, mysterious fogs and so forth; just about every classic outdoor element is touched upon. I enjoyed it. My wife enjoyed it. My kids enjoyed it (although they complained about using Holmes instead of 4E. Philistines!) I eventually won, without cheating, using the mightiest character class of them all: Wizard. My 2 Hp self conquered where none others could … by Sleeping with extreme prejudice. We’ve played this AT LEAST 20 times.

And therein lies this modules special power: you can pick it up and play it. No prep work. No goofing around. Just pick it up and play it. I combined this with my Holmes “3d6 down the line, d6 weapons” rules for a <1 minute character roll-up. It takes more time to prep for Solitaire than it does this module! I would pull this out, we’d sit down and play. Just play. I don’t think I’ve been able to do that in 25 years, since high school or jr high. I’d DM and she’d play, or she’d DM and I’d play, the DM rolling for the monsters and reading the text. Same with the kids, I just doubled the number of monsters in each encounter. It was simple, it was IMMEDIATELY accessible, and therefore we’ve played the crap out of this thing.

There is a significant business opportunity being missed here. While we were hot & heavy in to this, right after GenCon, two friends came over. They game. While they were here I was struck with a thought: Why don’t we play D&D in these cases? We have 3 players and a DM, why not play? I’ll tell you why, because it’s a chore. Haul out the gear, prep/read the module, make characters, pick equipment, BLEEECH! The threshold is too high. It seems like it always easier to play something else. An adventure module like this one needs to be packaged in a small box with some pre-gens in it. Friends come over? Pull out the box and play D&D. No character prep time. No module prep time because it’s either CYOA or something very similar to that. You could toss in a very simple rules pamphlet, like MicroLite 74 or something, but that’s not the key. The key is the pre-gens and an adventure you don’t need to prep. Instant one shot fun!

Boxed text doesn’t have to be bad. This module uses it and has done more to get me playing more D&D than any other product  other than my first one ever: Holmes. I would LOVE to see more products like this. Being a solo module, this has a lot of lengthy text, however a DM version could have quite a bit less. If some serious thought went in to it then you could have a zero entry-barrier module with BRIEF but good boxed text and a couple of follow-up bullet points

“This is a moldy bedroom in disrepair.”

6 Responses to I1 – Grave of the Green Flame