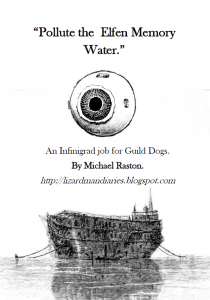 Dude from Lizardmandiaries wrote Tower of the Weretoads and I liked it, so I’m taking a chance on something that seems Eberron-like … also, I need to apologize to a guy who loves Eberron, so this is part of that. So … yeah. This is pretty fucked up right here.

This nineteen page adventure details a small building in a town suburb that the party is tasked with infiltrating to corrupt a shipment of water. It’s evocative, terse, well-organized AND BAT SHIT FUCKING CRAZY. Danger Wil Robinson; Bryce likes Gonzo!

Eberron, fantasy-punk, Misty Isles of the Eid Fantasy2/Madlands … anywhere you can have some corrupt elves and/or a a fucked up city (Drow or demon city, anyone?) you can put this thing in.

I don’t even know how to begin. Your client is “Equis Jud, makers of fine magical robes and assorted garments. They work aboard a converted prison hulk, a monstrosity of wrought iron. It churns along The White River, polluting it with magical effluent.” The Equis is a guild/business which … “Equis Jud is composed entirely of eymen, brittle, fragile people – vaguely humanoid but having heads of pure round eyeball orbs. They are always heavily armoured, wearing long full body chain suits and thick ornate helmets to cover their delicate all seeing heads. Communication is conducted through lip shaped amulets that speak on behalf of the eymen.” You’re given some vials to corrupt the water shipment, they are “will supply the party with a small bottle of red liquid in a bull shaped glass bottle. The eyes are tiny green gems.” The elven memory water jars (the things to be corrupted) are “Memory Water Jar: A glass container, about half the size of a barrel, filled with milky water. A braid of writhing pink tendrils stoppers the container while dipping into the liquid and splaying out the top.” AND THATS ALL ON THE FIRST FUCKING PAGE.

Ignoring, if you can, the more gonzo elements, and focus on how the writing cements images in your mind. The memory water. It’s not just a barrel, it’s a glass jar HALF the size of a barrel. Milky water. And that’s all before the tentacle stopper is reached. These are quick little elements that go just a little bit extra. We’re not dealing with your standard barrell. This is more. This is different. All of that is signaled through the description. It’s short. It stands out to the DM and the players. The ship “pollutes with magical effluent.” That’s so much more interesting than a boat on a river. All ships pollute, but by calling attention to it it really raises the bar of the description. The ship is not big, or large, or even huge, it’s a hulk, a monstrosity. This is the power of the language to go beyond the generic and in to the evocative to cement imagery and overload the description. If all you’ve taken from that is “Bryce likes gonzo” then you are a fool. Generic != Vanilla. This sort of writing is EXACTLY the sort of stuff I want to pay for. THIS is adding value.

The factory sits in a suburb, a little map of about thirty locations. Each one get a one or two sentence description. First, good inclusion of the neighborhood. This is a kind of caper mission, and the neighboring locations are always important for that sort of thing. Second, the locations don’t overstay their welcome. Location is 1 “Manbat infestation crawling along the ceiling of a semi flooded hovel, additional cockroach crab infestation in black filthy water.” Well, there’s something you don’t see in many adventures. Not your style? How about a merchant then? “Oam Mu, Black eyes, wears cloak of birds, untold cages of catlike animals available for purchase. Convinced Jzzkk the scrabmen running the eatery (22) is stealing, cooking and eating his cats. Willing to pay for him to be killed.” These are GUD. Again, don’t focus on the gonzo. They are short and yet they communicate everything you need to run them. There’s something of a physical or quirk to roleplay the NPC, and something to interact with when the party shows up. It’s focused on play. Some of them involve other locations, giving the play more life, a connectedness, than it would otherwise have. All in about a page and a half.

The rooms, proper, of the factory, give a one line description and then bullet point out the rest. Room five tells us:
5. Frigid and icy. Vegetation here is dead and withered. Blocks of ice stacked against wall.
* Pink tendril worms frozen in blocks of ice.
* Some blocks have melted and pink tendril worms either wriggle slowly half frozen or plop onto the frigid ground.

Note how it moves the from the general description, as the first line, to the additional lines providing more info if the party looks closer. The wanderer table has them engaged in some activity. The rando flowers on the wall get a little rando table. The monsters have short descriptions, with goals and motivations clear and terse, the writing focused on party interactivity.

I might note that the map is a bit crude, and could use a little more detail. One point of the roof is caved in. Imagine the party in the sky looking down and asking what they see and the DM digging through the adventure keys, reading each one, trying to figure out what to tell them. By putting major details on the map you know what to look at in the keys and focus on.

This is Pay What You Want at DriveThru, with a currently suggested price of $1. There’s no preview. AND NO SUGGESTED LEVEL. Grrrr…. Hey, how about throwing the consumer a bone?
https://www.drivethrurpg.com/product/256196/Pollute-the-Elfen-Memory-Water?affiliate_id=1892600