(5e) The Gauntlet of Spiragos 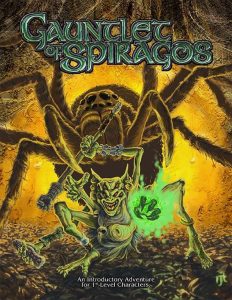 For centuries, titans bestrode the world, colossal heads and shoulders lost in the clouds, carelessly smashing and crushing all beneath. When the youngest of them had enough and declared war on their ancient parents, even the land itself suffered. These scars of the Divine War, which ended less than 200 years ago, have still not healed. One such scar is the Chasm of Flies, a rent in the earth created when the titan Spiragos the Ambusher was smote down by one of the young gods, Vangal the Ravager. Now, the Chasm is inhabited by spider-eye goblins and their spider allies, but it is also thought to be the resting place of powerful artifacts from that elder age.

This thing is a fucking mess.

This 45 page adventure is extremely linear, and, in the modern way, has so much text that it is impossible to follow and/or pick out the parts of the text that you need to run it. It’s got a good mythology behind it, and the dungeon setting is nice, but none of that justifies the excess for the actual content.

Forty five pages? Well, The actual “dungeon” doesn’t start until page twenty five, and the appendices with new monsters start at page thirty five, so you get a ten page dungeon. That contains maybe … eight encounters? Asides, advice, history, backstory, repetition … and it all works with a kind free-flow description style that bucks the room/key format … making the entire thing nigh incomprehensible.

The gimmick here is that, of the three magic items you are looking for, you are actually adventuring inside one of them. A titan’s hand, inside his gauntlet, is embedded in the earth and that’s the pit/chasm you descend down into. Nice setting, with metal cave walls, old bone columns, etc. It’s nice, as is the titan war backstory/setting.

But fuck me man. There’s A LOT of read aloud. And it’s all in a small italic font, making it a pain to read. The goal is to help the DM not make their eyes worse. If I have to hold it up to my nose, instead of laying it flat on the table, it wasn’t a good design decision.

The linearity is stupid. “Here are three optical encounters the party can have on the way to the pit.” They are all just combats, nothing more. And there’s a fourth provided, a kind of hit & run necromancer to dog the parties tails. Again, all optional. The actual dungeon is just more of the same. On the way down encounter this, then this, then this. And it’s all fucking combat. You might as well be playing Descent.

The worst part is the free form layout. It’s linear, but without an encounter/key format. It’s all “ then this and then this” and mixes advice, history and backstory in to the text. It’s IMPOSSIBLE to figure out which area is being described, transitions, etc. It’s one of the most stream of conscious styles I’ve ever seen.

I loathe modern design. “At your discretion this body may have any treasure you wish to give the party.” Well no fucking shit sherlock. How about you add some value and put something on that body? This whole “optical combat” and “freeform treasure” design style is loathsome. Provide some fucking value for christs sake.

This extends to the adventure format proper. There are no real maps and the adventure essentially relies on skill checks. Want to find a trapdoor down to the next level? Make a skill check to find one on your current level. Just roll the fucking dice and master the combat rules; that’s all there is to this adventure.

It does have a decent synopsys, which I wish more adventure had, and the new magic items are decent, leaning toward the low-powered artifact end of the scale. They don’t quite feel wonderous, but they are a cut above the normal slop and include notes on how to destroy them. That lends an air of mystery to them, which is what magic items SHOULD have.

This is free at DriveThru. The preview is six pages. They don’t really reveal what the adventure proper is like. At best you have to discern that it takes six pages to get to the hooks. That’s not good.https://www.drivethrurpg.com/product/171523/Gauntlet-of-Spiragos-free-5E-OGL-adventure?affiliate_id=1892600

1 Response to (5e) The Gauntlet of Spiragos