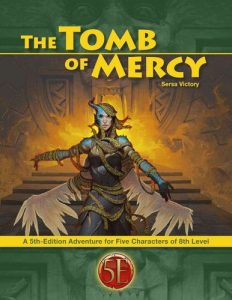 Humanity’s Last Hope Corrupted! The Tomb of Mercy was built centuries ago to house arks that would preserve the souls of humanity from an infernal invasion. Now you must travel to the Wasted West, unseal the Tomb, and send the last ark safely on its journey. Fail, and humanity faces extinction!

A DriveThru Hot Seller! Let’s see how much I regret the purchase …

This thirty page adventure is a linear crawl through a dungeon with twelve rooms. The core adventure appears on ten pages, leaving the other twenty pages to fluff, monsters, pregens, etc. This could be a cool one-shot con adventure, but is too limiting for anything else.

I have opinions on this one. I feel like I was ripped off; that the marketing doesn’t actually tell you what you’re buying. Given the rather niche corner this occupies it feels important that expectations are set pre-purchase. This doesn’t do that, not by a long shot.

Did you know you could win D&D? Yes! It’s true! In this adventure the DM and players compete with each other to draw Augury cards. At the end of the adventure they use what they’ve drawn to try to figure out which three random cards were sealed in an envelope at the start. Whoever guesses more wins the game!

And there are respawn rules! If a PC dies then they respawn the next round next to an ally. That’s nice, isn’t it? Oh, but if PC’s die six times then the DM wins automatically, so …

[The adventure commits two unforgivable sins, and this is one of them. D&D is not adversarial. Any hint that it is needs to be stamped out. There is no greater mindset of evil than “Adversarial D&D. Respawn? Ok. Die six times and the DM wins? No.]

I want to touch on two other issues before I get to my first bullet point. First, an emphasis is given to terrain that I don’t usually see, except in 4e adventures. Second, killing things/defeating challenges give you the key to get to the next room.

You now what this feels like? A boardgame. A scenario for Descent, or some Neverwinter Nights scenario. As a one shot con game that’s fine. Weird rules for three to four hours and then you’re out. No commitment beyond that; it’s fun. As a standard adventure… well … This is a one-trick pony.

Read-aloud is in light green italics, which makes it hard to read. In spite of there being twenty pages of support material, the map is all on one page, in some weird scale. It’s gorgeous, and clearly meant to be printed out, but is too small to do that. But, hey, they got it all on one page.

Magic items are good. Unique items like a shield you can feed monster bodies to in order to get a breathe weapon attack. They feel mythic.

On the monsters, well …

The first monster is a “conjoined bonewraith dust goblin spirit caller.” It’s hard to take that seriously. I’m guessing this is some templated build? I don’t understand that shit. Just slap some stats down; why do designers feel the need to use the rules to build a monster? And if it’s not a templated build, then why the fuck would you give it a six word name that seems like a template build? It’s hard to take seriously when adventures do this. Not to mention the monsters are long. Like, a page and half in one case. There’s this style of adventure that seems to take rules lawyering to a new heights, and this is one of them. Everything explained using current rules and two paragraph entries for new monsters. Didn’t the OD&D mind flayer just each brains on a 1-2 out of a d6? Seems easier to run than digging through 1.5 pages of stats to read two paragraphs while you’re trying to run a combat with six players.

The read-aloud is ok. It’s certainly evocative although it tends towards to the unnecessarily flowery novelist style. And while there’s a LOT of DM text it’s formatted rather well in most cases. Too long, way too long, with too much crap in it that doesn’t matter during the adventure. It does matter if you are reading the adventure for fun … nice fluff. Which, of course, is also a major sin of adventure writing. More is not more. More gets in the way of running the adventure at the table.

This thing is the definition of idiosyncratic. The “Winning”, respawn and six deaths things. The setting is a world overrun by hell with the PC’s launching an ark in to space with humanity’s last souls. The pregens are all female and named “Sister of Mercy” and “SIster of Judgement” and “SIster of Fury.” [Sadly, no one sang corrosion to me during the review.] This is hard to use during a normal game and probably a decent con game. But then, the pregens are not formatted for easy printing, running to multiple columns. And the monsters are hard to grasp. And the map is not optimized for a con print.

I’m going to give the designer the benefit of the doubt. I think they wrote an ok convention game. And then the Kobolds got ahold of it and fucked it up by putting the map on one page, spreading the pregens over multiple columns/pages, and forcing a “standard monsters format” and mechanics bullshit. Then hey marketed it as an general purpose adventure instead of a one-shot … which I fucking HATE.

The preview s five pages. The last page shows you the map and the second to last shows you the first room. Nice imagery, and mechanics associated with it, but WAY too long.
This is $7 at DriveThru.https://www.drivethrurpg.com/product/240933/Tomb-of-Mercy-for-5th-Edition?affiliate_id=1892600

9 Responses to (5e) The Tomb of Mercy