(5e) The Chapel on the Cliffs 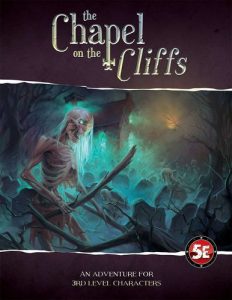 It’s been fifty years since the curse struck Kennmouth. Since then, few have dared brave the dangers of the abandoned village. Even fewer came back in one piece. Kathryn Reed has her eyes set on the fishery waters of Kennmouth Bay, but she needs adventurers foolish enough to lift the dark curse. Will you be the heroes who finally rid Kennmouth of its denizens?

This 38 page adventure details a cursed village, empty by day and patrolled by undead at night. Sandboxy, not a railroad, and rewarding thoughtful exploration, it’s organized well and has great imagery. I am not mad as this adventure. (It also comes with a 25 page supplement that scales the adventure to various levels and has full monster stats.)

This adventure is focused. It knows what it wants to do and it’s focused on doing that and little else. The setting is a ruined village. While a village map is provided, the only structures described are those related to the adventure. You can pick up a rumor about a witch being hanged at a tree, so the tree is described. There’s a lighthouse that, if you climb, you can see a couple of new locations to go look in to. The carpenters shop has tools and supplies to fortify a house (against undead attack at night) so it get a few words.

The details provided all directly relate to how the party interacts with the world. It’s like the thing was playtested and additional detail provided based on those playtests. Hmmm, need chase rules and/or skeleton siege rules. Hmmm, players want supplies to barricade themselves. Better put some help in for the dm.

It’s got more than once path to look in to. There’s an (obvious) green glow coming from a chapel on the cliff at night. There’s rumors about a hung witch. There’s obviously some ancient barrow-mound shit going on. Not exactly false trails, since they can contribute to things going on in the village also. Clue trails that lead to other things, in other words. This thing is DESIGNED, something few adventures seem to be.

Ghost ships, erie green glows from the cliffside chapel, the entire concept of a cursed/haunted village, disturbed graves, skeletons clawing their way out, a pale thin woman trapped in a sea cave … this thing also brings the evocative. It does a great job of creative a vivid picture with only a few words.

Which is not to say this is a terse adventure. It has something else going on. The page count is a bit up there. Some of that is related to the formatting. It uses sections titles, formatting, and whitespace to good effect, but that also contributes to the length. As does the anticipation of the needs the characters might have; that DM advice takes up space. The text can get long in a few sections and a little bolding would have helped. I’m thinking of the Green Mold curse, which gets a column of text. You’ll need to dig through it to find the mechanics for when the party encounters it. The NPC’s also tend to get an opening paragraph description that’s a bit conversations. A little bolding, to call out their main traits, would have helped with scanning during play. It DOES make good use of bullet points, and in spite of my nits IS organized well.

The hook is also a little … 5e. It’s oriented around a businesswoman wanting the party to look in to things for her so she can used the cursed villages harbour. How pedestrian. There’s a lot of rumors and information to follow up on in the nearby village by the mundanity of the hook is lame. A curse/haunted village nearby, with rumors about it in town, and maybe some related small hooks (which are interconnected with the businesswoman) might have been a more natural fit. But … there is a lot of rumor and information in the nearby town and it’s done well. The italic text, used for read-aloud, in an offset color, doesn’t work well for me, i find the italics and color chosen hard to read.

This is a decent adventure that rewards some thoughtful play. Looking around. Paying attention. NOT rushing in to things. Running away. Rushing headlong will get you murderized by 120 skeletons. Nice. I approve. I could/would run this and not be mad. A few better choices in formatting and editing would have pushed this in to my Best Of category. But, it’s also easily one of the best, if not the best 5e adventure I’ve seen.

This is $5 on DriveThru, with print versions available. The preview is 13 pages, a third of the adventure. The lighthouse, rowan tree, and smithy are on the last two pages and give you a good idea of the town locations and writing style. Page 11 shows some of the helpful DM advice, in the form of simple timekeeping tasks (for sunset when the skeletons arise.)https://www.drivethrurpg.com/product/216229/The-Chapel-on-the-Cliffs-5e?affiliate_id=1892600

7 Responses to (5e) The Chapel on the Cliffs