Dance of the Medusa 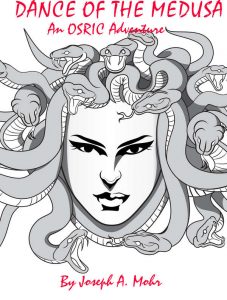 In southern Zanzia chaos reigns as a new cult is growing stronger and threatening the powers that be. This cult worships a Snake Godess and her temple is believed to be in the swamps of southern Zanzia. Heros are needed to investigate this cult and temple and put a stop to this threat to the kingdom.

My apologies Joseph Mohr. I just sat in coach on a five hour flight to San Francisco and I feel like I’ve been hit hard lately with unfocused writing.

This temple raid is 31 pages long a describes an evil temple with seventeen rooms on two levels It’s almost entirely a pure hack, although there might be some imposter for at the start to get in. It appears to be boring, large, and uses a writing style that frustrates me to no end. It’s just yet another also-ran obfuscating any good material to come out.

There’s a wand, the description tells us that it appears to be made of stone. A bed appears to be comfortable. A statue appears to that of an adventurer in plate mail. Everything in this adventure Appears To Be. That writing style drives me nuts. It is or it isn’t. These are just weasel words used to pad out an adventure. Unfocused writing. It clogs up the text. It’s the difference between “There is a conformable bed” vs “There is a bed in the room and it appears to be comfortable.” These are miles apart in terms of providing a resource for the DM to use.

The wand “can only be used by magic-users.” Well, yes, that is the normal state of the world. “Listening at the door you hear no sound”. Again, which is what one would expect for an empty room. “There is a door to the west and a passage to the north” … exactly like the map shows. A dresser has normal clothes in it … exactly as one would expect. It has two shirts and one pair of pants and a pair of socks. This is weak writing. Instead of telling us what is new or special or interesting it concentrates on telling us what we would normally expect. Does a room description need to tell us that the sun will rise tomorrow? Does it need to tell us in every empty room that we will hear no sounds when listening at the doors? !!THERES. NO. FUCKING. REASON. FOR. ANY. OF. THIS!! We’re not paying for an adventure in order to be told about the sock & underwear content of drawers, or that there are no orcs, demons, devils, giant rats in the room.

Instead, I went out with a boy who died. Errr, I mean, Instead the descriptions need to concentrate on evocative writing that assist the DM in quickly scanning the text for details ACTUALLY NEEDED during play. You know what’s not evocative? The word “large.” One room, the main temple, has a large alter, a large fountain and a large idol in it. Wonderful. Are they large? Large is boring fucking word. A towering idol, a shadowy alter, a mist-filled fountain, these invoke feelings in the DM which they can then transfer to the players … the goal of evocative room descriptions. (Note, alters should not be vile. Vile is a conclusion. Tell us WHY. Don’t TELL us the alter vile, instead SHOW us why the alter is vile. Fresh babies impaled on candlesticks communicates vile much better than just telling us its vile.)

All of this results in a verbose and boring room text. The aforementioned alter room is one and a half pages long. There’s a column of text to describe a trap where a car falls from the ceiling. A paragraph of text on a needle trap.

“The desk has a drawer to it which is locked and trapped. Should anyone attempt to open the drawer without first unlocking it or removing the trap (or disarming it by pulling the handle and turning it three times clockwise) will be pricked by a poison needle. The person stuck by the needle will need to save versus poison or be paralyzed for ten rounds.”

Again, a long winded winded writing style. The desk is trapped with a poison needle. Save vs paralyzation. Lasts 10 rounds.” Tada!

You get a feel for these things after awhile. A long page count with a small number of rooms doesn’t ALWAYS mean an adventure sucks … but it is makes one wary when they see it. The writing style is forgivable since it should improve with time, feedback, and stronger editing. Ideally, this would give the designer more time to concentrate on the actual encounters and constructing more interesting situations and environments.

It’s $3.50 at DriveThru. The preview is six pages but only shows you two pages of actual text, and even that’s general information. Notably, you get to see the first occurrence of the river of blood description, the temple guards, the lich, and what the temple is made of. You’ll get to read those descriptions several more times each before reaching the end.https://www.drivethrurpg.com/product/222243/Dance-of-the-Medusa?affiliate_id=1892600

2 Responses to Dance of the Medusa